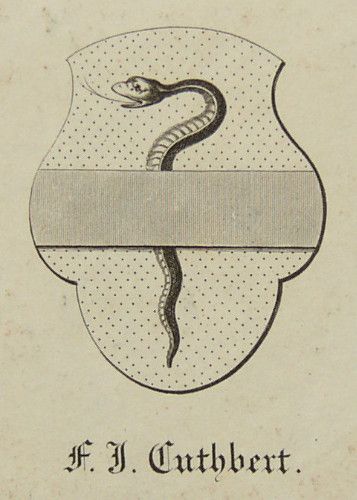 We know of the existance of Frederic John Cuthbert from:
1. His memorial in the church of "St Martin of Tours with St Stephens on the Downs", located in Epsom, Surrey.
2. His entry in the Epsom Parish Register of Burials.
3. His bookplate.

His memorial inside the church of 'St Martin of Tours with St Stephens on the Downs', also has a memorial to his father and his brother.
These memorials read as follows:
Sacred to the memory of James Ramsey Cuthbert Esq of Grosvenor Square, London and of Ednam in the county of Roxburghshire, and of Hanworth Park in the county of Middlesex, eldest surviving son of Arthur Cuthbert Esq of Woodcote. He died March 29th 1821, aged 45 years. Also of Sophia wife of the above; who died at Pau. February 26th 1857, aged 80 years.
Sacred to the memory of Frederic John Cuthbert Esq eldest son of James Ramsay Cuthbert Esq and Sophia his wife. He died July 4th 1850 aged 48 years.
In Memoriam James William Cuthbert , born December 8th 1805, died May 6th 1874.