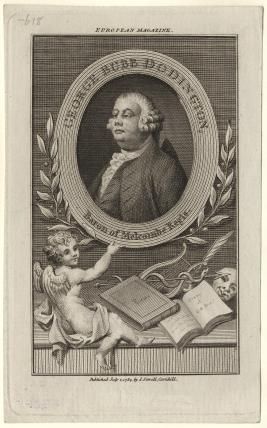 George Bubb took on the additional family name of Dodington in 1717 around the time that his uncle George Dodington died and left him a great deal of money.  He soon spent 140,000 pounds completing a magnificent mansion which his uncle had begun at Eastbury in Dorset.

George Bubb Dodington seems to have been a very sociable person who moved in elevated circles.  He became a good friend of Frederick, Prince of Wales, and loaned money to him.  He was created Baron of Melcombe in 1761 following the accession of Frederick's son to the throne as George III.

His diary was published posthumously in 1784 by his nephew Henry Penruddocke Wyndham.  It rambles on mainly about his relationship with the Royal family and many of the important people of the time.