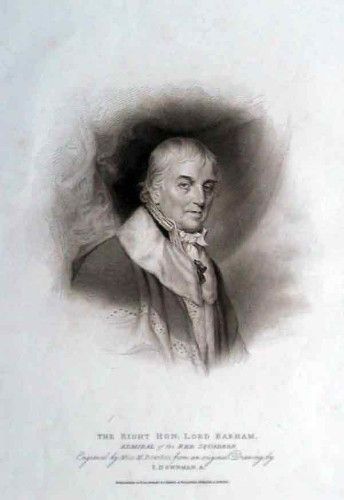 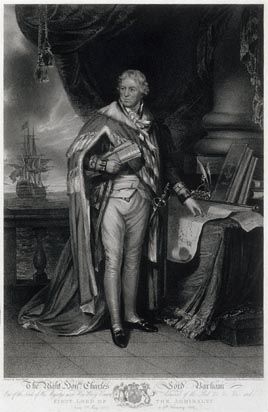 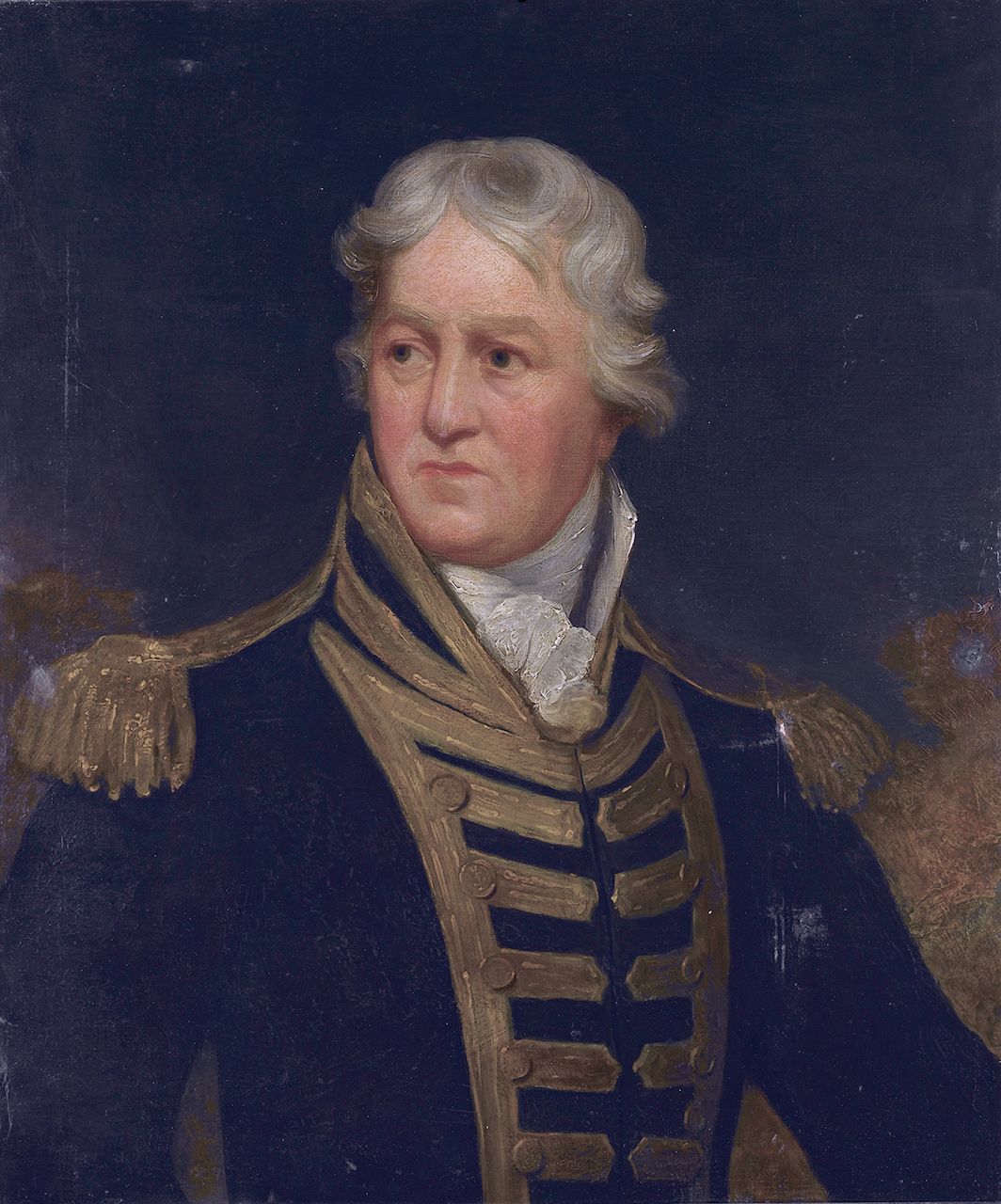 Sir Charles Middleton 1726-1813, Later Lord Barham, Admiral of the Blue and First Lord of the Admiralty

In December 1761 Charles Middleton married Margaret Gambier, niece of Captain Mead, who he had encountered aboard HMS Sandwich some twenty years earlier.  Margaret moved to Teston in Kent, to be close to her friend Elizabeth Bouverie.  In 1763, after service aboard the Adventure, Charles moved to join Margaret at Teston, and for the next twelve years he farmed the land belonging to Mrs Bouverie, taking on the role of a country gentleman.

In 1775 Charles was given a guardship at the Nore, a Royal Navy anchorage in the Thames Estuary and a few years later in 1778 he took up the position of Comptroller of the Navy, a post he held for twelve years until 1790.  It is during this time that George Marsh would have known Charles but George only mentions him in his diary around the years 1789-1790 when he had a difference of opinion with him (see Diary of George Marsh page 156).  In 1781 Charles was created a baronet.  In 1784 he was elected Tory Member of Parliament (MP) for Rochester, a seat he held for six years, and three years later was promoted Rear Admiral.  By 1793 a Vice Admiral, he was the following year made a Lord of the Admiralty.  In 1795 he became Admiral of the Blue.  He was finally, in 1805, appointed First Lord of the Admiralty and was created Baron Barham, of Barham Court and Teston in the County of Kent, with a special remainder, failing male issue, to his only child, his daughter, Diana Noel, 2nd Baroness Barham, and her male heirs. In September 1805, Lord Barham attained the rank of Admiral of the Red. He died eight years later, aged 86, at his home of Barham Court.

The following is taken from an old book but I am not sure of the title.

Sir Charles Middleton, afterwards Lord Barham, was a native of Scotland. His father R. Middleton, Esq., resided for a considerable time in, Dundee, of which port be was collector.  Having married Miss Dundas, of Leathin, in the county of Stirling, he had two sons by that lady ; George, and Charles, who was the elder brother, born at Dundee, about the year 1736, and received his education in that town, which, like most of the royal boroughs of Scotland, has been long in possession of excellent schools.

Mr Charles Middleton, being destined for the navy, while yet a lad was sent to sea as a midshipman ; and on the 2nd of May, 1758, attained the rank of post-captain in the Royal Navy.  We shall not here enter into the particulars' of his professional career, but content ourselves with observing, that he distinguished himself greatly by his spirit, vigilance, and activity, in the West Indies.  Having, while on that station, been appointed to the command of the Blanford, of twenty guns, he took and destroyed so many French privateers, that the assembly of Barbadoes, grateful for the protection thus afforded to the commerce of the island, presented him with a gold-hilted sword.

In 1764 he was appointed to the Anson, guardship at Portsmouth, and afterwards employed on convoy service to the West Indies.  In 1758 he was promoted to be captain of the Arundel, taking post from 22 May.  In 1761 he commanded the Emerald frigate in the West Indies, and cruised with success against the enemy's privateers, many of which he captured or destroyed.  For his services in the protection of trade the assembly of Barbados gave him a vote of thanks and a gold-hilted sword. He was afterwards captain of the Adventure on the home station till the peace, and for the following twelve years remained on half-pay.

In 1778 he became comptroller of the navy [1778-90] ; a situation which had before been occupied by many distinguished seamen: such as Sir Richard Haddock, Sir Charles Wager, Sir Dighy Dent, and Sir Hugh Palliser .  His business was to comptrol all payments of wages ; to know the market rates of all stores for shipping; to examine and audit all the accounts of the treasurer, victuallers, pursers, and storekeepers.  The business of this office is divided into three branches, viz. home expenditure, foreign expenditure, and seamen's wages. At each of these presides a chief clerk, under whom are many inferior clerks for the dispatch of business.

While comptroller of the navy he wished to institute a course of experiments, for the express purpose of ascertaining the best construction in respect to yards, capstans, pumps, rollers, &c.  At the end of three years his services were at once acknowledged and remunerated by a patent of baronetage, with remainder to his son-in-law, Gerard Noel Edwards (now Gerard Noel Noel Esq.), of Ketten, in Rutlandshire, and his heirs male by Diana, his wife.

In 1781 sir Charles was elected a member of the Trinity-house; and on the 14th of September, 1787, he received his flag, as rear-admiral of the blue.  This must have been considered as a very distinguished mark of favour; for lord Howe, who was at that period first commissioner of the admiralty, had excluded several officers from similar promotion, without assigning any reason; and, one was deprived of his flag, merely on account of an official employment in the civil service of the navy.  Sir Charles Middleton was promoted to rear-admiral on 24 September 1787, in defiance of all custom or precedent.  It had clearly been supposed that, in accordance with custom, if he accepted the flag, the office of comptroller would become vacant, and the commissioner had expected to succeed to it. Middleton's family interest was presumably strong enough to carry the irregularity.

Since that period Sir Charles Middleton, in 1793; became vice-admiral; in 1795 an admiral: he was the tenth on the list of admirals of the red, and had only eleven flag-officers senior to himself appertaining to the fleet. In 1794, during the naval administration of the  earl of Chatham, he became one of the lords of the admiralty, which office he, however, retained no longer than December 1795.  Anterior to this he had been appointed one of the commissioners "to enquire into the state and condition of the woods, forests, and land revenues, of the crown; and to sell or alienate fee-farms, or other unimproveable rents." He appears to have acted in this capacity from 1787 to 1793; and in the course of that period there were no less than fifteen voluminous reports, with appendixes, delivered in to government, the whole of which occupy one large folio volume.

On the resignation of Lord Melville, he was appointed first lord of the admiralty (30 April 1805), and at the same time, was created a baron of Great Britain, by the style and title of lord Barham, of Barham Court and Teston, in the county, of Kent, by patent, dated May 1, 1805, with remainder to his daughter Diana Noel Noel, of Exton-park, in the county of Rutland, and her heirs male.  His lordship was, at the same time, made a member of the privy-council; and at an advanced period of life commenced a most arduous undertaking, which had been recently rendered more laborious and complicated by the war that had just taken place with Spain. He was a near relation of Melville, and it would seem that the appointment was due to Mr. Pitt's desire to lessen the force of the blow which had struck down his friend.

Barham was now eighty years old, and no longer fit to be at the head of the English navy even in peace, still less during a great war. But his administration evinced no symptoms of debility, for during that period of our naval history the ports of the enemy were strictly watched and blockaded; and no sooner did a detachment escape by some fortunate accident to a distant quarter of the globe, than it was immediately pursued, discomfited, and dispersed.

On the accession of the new ministry in January 1806, lord Barham literally retired, like Cincinnatus, to his farm, whence, indeed, he derived his title. He died on 17 June 1813.

Charles Middleton, afterwards well known as Lord Barham, provided management of the navy when First Lord of the Admiralty in times of unequalled difficulty, which will ever be mentioned to his honour in the pages of British history. His wise and prompt services were commended in the highest terms by Lord Nelson ; and the navy of England reached the acme of immortal fame, when a man, ridiculed as a saint and a methodist, presided over its affairs.  Lord Barham permitted no Sunday labour in the dockyards ; yet he managed to comply with the urgent and rapid demands of the hero of the deep, whose circumstances and uncommon movements required no ordinary energy in the supply of his resources.