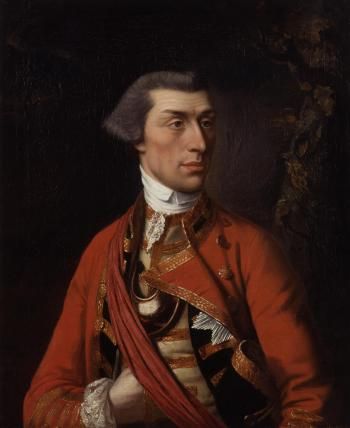 Eyre Coote started his military career with the 27th Regiment of Foot.  He first saw active service in the Jacobite rising of 1745, and later obtained a captaincy in the 39th Regiment, the first British regiment sent to India.  In 1756 a part of the regiment, then quartered at Madras, was sent forward to join Robert Clive in his operations against Calcutta, which was reoccupied without difficulty.  Coote was soon given the local rank of major for his good conduct in surprising the camp of the Nawab of Bengal.   Soon afterwards came the Battle of Plassey.  In October 1759 his regiment arrived to take part in the decisive struggle between French and English in the Carnatic.  He took command of the forces at Madras, and in 1760 led them in the decisive victory of Wandiwash.  He also took part in bringing to an end the siege of Pondicherry.

Soon afterwards Eyre Coote was given the command of the British East India Company's forces in Bengal, and settled of a serious dispute between the Nawab Mir Qasim and a powerful subordinate. In 1762 he returned to England.  He married in 1769 a daughter of Charles Hutchinson, governor of St. Helena.   In 1771 he was made a Knight of the Order of the Bath.

In 1779 Eyre Coote returned to India as Lieutenant-General commanding in chief.  Hyder Ali's opening of the Second Anglo-Mysore War in southern India called him back into the field, but it was not until 1 June 1781 that Coote struck the first heavy blow against Hyder in the decisive Battle of Porto Novo.  The battle was won by Coote against odds of five to one, and is regarded as one of the greatest feats of the British in India. It was followed up by another hard-fought battle at Pollilur (the scene of an earlier triumph of Hyder over a British force) on August 27, in which the British won another success, and by the rout of the Mysore troops at Sholinghur a month later.  He died in Madras in 1783.

A complication occurred after Eyre Coote's death as he had been in possession of a lot of gold much of which had been borrowed from Admiral Sir Edward Hughes.  This caused some difficulty for Admiral Hughes and Arthur Cuthbert who had to work quickly to ensure that their gold was returned.  At the same time the portion of gold belonging to Sir Eyre Coote had to be passed to his wife.

Eyre Coote is also mentioned briefly in the diary of George Marsh (page 29).  James Crisp had known Eyre Coote when they were children and when James Crisp went to India Eyre Coote helped him to meet all the right people and start up a new business.