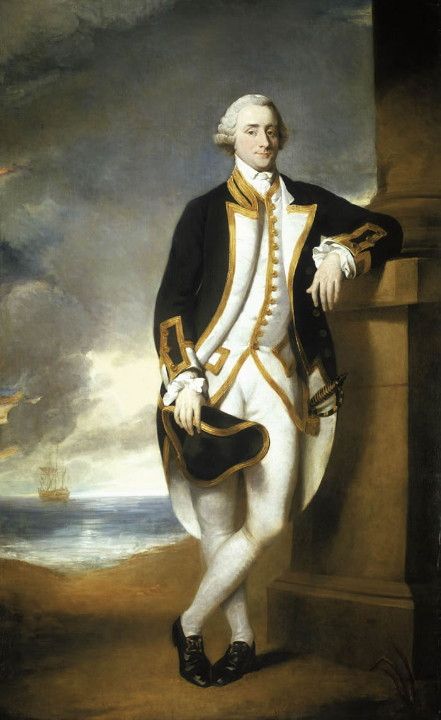 Hugh Palliser was the only son of Hugh Palliser and Mary Robinson, of Kirk Deighton, in the North Riding of Yorkshire.  He entered the navy in 1735 as a midshipman on HMS Aldborough commanded by his uncle Nicholas Robinson.  In 1741 he was promoted to Lieutenant and served on the ship Essex.  He managed to progress on merit and by 1755 he was placed in command of the 60-gun HMS Eagle.  One of the junior officers serving underneath him was the young James Cook.  Hugh engaged and defeated the French 50-gun Duc d'Aquitain off Ushant on 30 May 1757 and then went on to command the 74-gun HMS Shrewsbury, part of the Channel Fleet under George Anson.

In 1764 Hugh was appointed Governor and Commander-in-Chief at Newfoundland.  He had under his command the 50-gun HMS Guernsey, and several frigates and during this time protected the local fishing waters against encroachment by the French.

In 1770 he was appointed Comptroller of the Navy taking over from Captain George Cockburn.  Hugh was made a Baronet in 1773 and in 1774 he was elected to Parliament for the Borough of Scarborough.  In 1775 he was promoted to Rear-Admiral and under the Earl of Sandwich he became one of the Lords of the Admiralty taking over from Captain Hon. Augustus John Hervey.  At the same time Captain Maurice Suckling took over as Comptroller of the Navy.

Hugh is mentioned in the diary of George Marsh, Commissioner of the Navy, (page 139, Feb 1776) with reference to a meeting with the Prime Minister Lord North where they were discussing how to obtain more shipping to transport troops to fight in America.

In 1778 Hugh was promoted again to Vice-Admiral of the Blue and was appointed to the Channel Fleet under Admiral Augustus Keppel.  On 27 July 1778 in the First Battle of Ushant, the Channel Fleet fought an inconclusive battle with the French fleet.  The battle's outcome led to personal acrimony between Palliser and Keppel and resulted in their individual courts martial however they were both acquitted.

In 1780 Hugh was appointed Governor of Greenwich Hospital by Lord Sandwich, and was again elected to Parliament for Huntingdon (1780-1784).  In 1787 he was promoted to the rank of Admiral.  He died on 19 March 1796 at his estate in Chalfont St Giles and was buried at St Giles in Dorset.