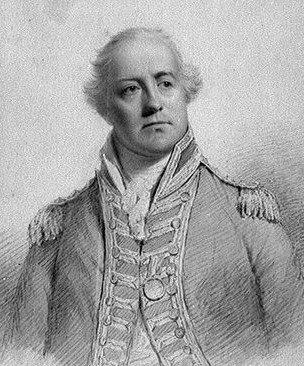 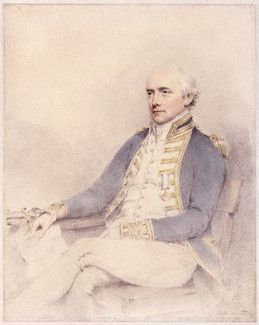 James entered the Navy in 1767 as a midshipman on board HMS Yarmouth, commanded by his uncle.  He was commissioned as a Lieutenant in 1777 and served in a succession of boats steadily working his way up the promotion ladder.  In 1783, at the end of the American War of Independence, he had a period on half pay and then in 1793 following the declaration of war with France, he was appointed to command the 74-gun HMS Defence under Lord Howe.

In 1795 James was promoted to rear-admiral and appointed as one of the Lords of the Admiralty together with Rear Admiral William Young.  They replaced Vice Admiral Sir Charles Middleton.

James is briefly mentioned in the diary (page 182) of George Marsh in August 1798.  George receives an indication that he is to be rewarded with a peerage in recognition of all his good work over the years.  Sadly his peerage never eventuated.

James gained promotion to vice-admiral in 1799, and in 1801, he was appointed commander of the 98-gun HMS Neptune and third-in-command of the Channel Fleet under Admiral William Cornwallis.

In 1807 James volunteered to command the naval forces sent as part of the campaign against Copenhagen. He saw action in the 2nd Battle of Copenhagen in flagship HMS Prince of Wales and was afterwards given a peerage, becoming Baron Gambier, of Iver in the County of Buckingham.

In 1808 he was appointed to command the Channel Fleet.  The following year he was in dispute with Lord Cochrane and Admiral Sir Eliab Harvey which resulted in a court martial however James was exonerated.

In 1813 James was part of the team negotiating the Treaty of Ghent, ending the War of 1812 between Britain and the United States.