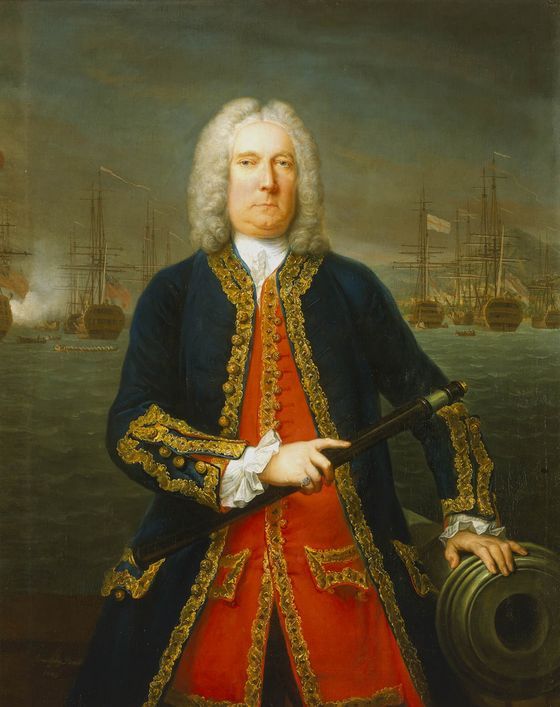 George Marsh in his dairy (page 70) records  that in September 1748 his friend Admiral Mathews helped him out by recommending him for a new job.  George's job as a clerk in the Navy Office had come to an end during a general scale down and so he had applied to 'attend the custom house keys to qualify myself for a Kings waiter land waiter, or gauger there'.   George managed to get the job and was very grateful to Admiral Mathews for his help.

At this stage Admiral Thomas Mathews (1676-1751) was at the end of his career.  After a varied time in the Navy he had initially retired in 1724 but had returned in 1736 taking up a civil appointment as Commissioner in Chatham until 1744 when he once more returned to active service.  Presumably it was during this interlude as a Commissioner that he had first met the young clerk George Marsh.

In 1744 Admiral Mathews returned to active service and was in command of the Mediterranean fleet.  He had attempted to intercept a Franco-Spanish fleet at the Battle of Toulon but the action was fought in confused circumstances, with poor communications and the breakdown of the chain of command.  Some commanders including Captain Edward Hawke had supported him but Matthew's second in command Vice Admiral Richard Lestock was very lacking in the support given.  As a result the enemy were able to escape with the loss of only one ship, while Mathews had several ships badly damaged.

The House of Commons petitioned King George II for a public enquiry, and a dozen captains were tried by court-martial and cashiered.  Vice-Admiral Lestock was tried, but managed to place the blame on Mathews.  With the help of powerful supporters in government Vice-Admiral Lestock was acquitted and offered further employment.   Admiral Mathews was then tried by court-martial, in 1746, on charges of having brought the fleet into action in a disorganised manner, of having fled the enemy and of having failed to bring the enemy to action when the conditions were advantageous.  In his defence it was shown that he had fought bravely but in June 1747 the court judged the charges were proven and Mathews was dismissed from the service.

George Marsh makes a reference to having helped Admiral Mathews at his trial and so must have been on good terms with him, hence the recommendation in 1748.  George makes another reference to him in 1750 when Savage Mostyn and Sir Peter Warren were both applying to obtain the 'Elder Brothership of the Trinity House'.  The number of votes were equal but before the decision was made George showed up with Admiral Mathews who then gave his vote to Savage Mostyn.   Savage Mostyn was very pleased and partly in gratitude gave George Marsh a new appointment as a clerk in the office for bills and accounts.