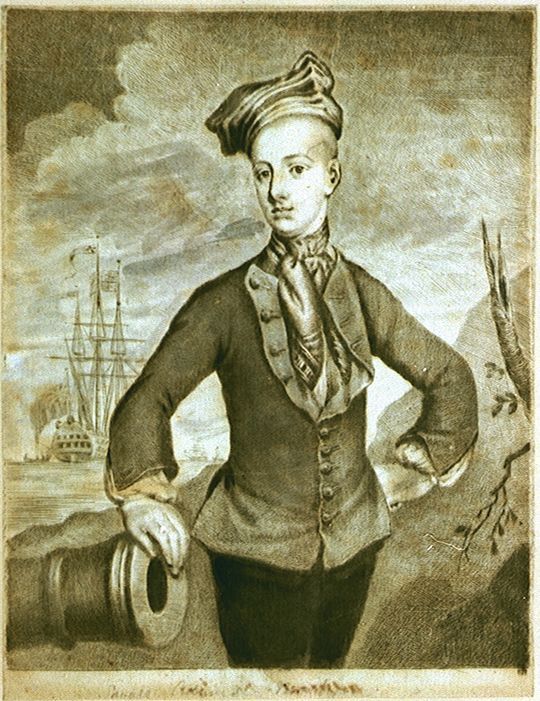 George Marsh in his diary first mentions Mr Mostyn [Rear Admiral Savage Mostyn, 1713c-1757] in November 1750 (see diary page 77).  By chance George accompanied Admiral Thomas Mathews to a meeting where Admiral Mathews was then able to vote for Savage Mostyn (instead of Admiral Sir Peter Warren ) to become 'Elder Brothership of the Trinity House'.  Savage Mostyn was very pleased and afterwards took George on as a Clerk in his office for Bills and Accounts.  This was an important turning point in George's career as he was now back in the Navy Office meeting people and once again working his way up the career ladder.

Savage Mostyn had an active career in the navy serving during the War of the Austrian Succession and the Seven Years War.  His position became rather controversial after a failed attack on some enemy boats in December 1744.  At his own request he faced a court marshal but was acquitted probably mainly due to his uncle, Daniel Finch the Earl of Winchilsea, being First Sealord (1742-1744).  Many people were not convinced and shortly afterwards Admiral Edward Vernon produced a pamphlet 'An Enquiry into the Conduct of Capt. M - - - -n.  Being Remarks on the Minutes of the Court-Martial, and other Incidental Matters.  Humbly addressed to the Honourable House of Commons.'  Apparently Savage Mostyn, still in command of the Hampton Court, was hooted out of Portsmouth dockyard.

Probably as a result, Savage Mostyn left the navy shortly afterwards and in 1747 he took up politics representing the constituency of Weobley, in Herefordshire.  By 1750, when he met George Marsh, he had became actively involved in the administration of the navy as Comptroller (1749-1755) taking over from Captain Richard Haddock (1673-1751).

In February 1755 (page 86 of the diary) George Marsh notes 'Mr Mostyn the Comptroller of the Navy being appointed an Admiral, he sent for me late last night and directed me to be ready this morning to set out with him to Plymouth where he was going to take the command of, and equip a Fleet there as fast as possible, to act as his Secretary till his own Secretary could get there to him'.  George notes that Savage Mostyn then kept him so busy writing letters, all day and all night, that in the end George became quite ill.  On the 5 April Savage Mostyn sailed with his fleet for Plymouth and a very relieved George Marsh returned home to London.