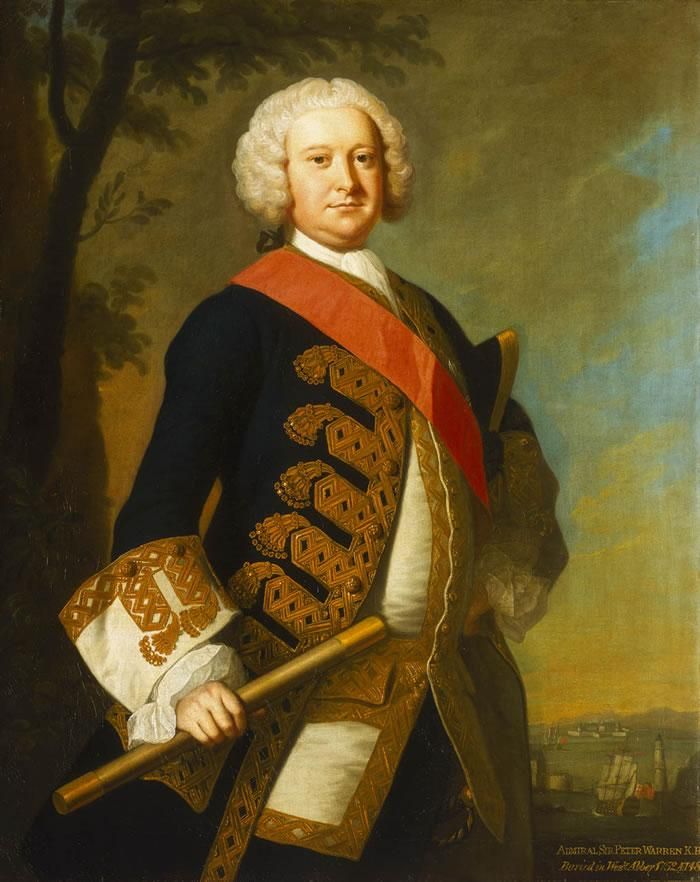 George Marsh in his diary (page 19) names Sir Peter Warren when talking of his brother Isaac Marsh.  Isaac was Sir Peter Warren's first Lieutenant but Isaac then died relatively young.
On page 77 of the diary there is another reference some time later, 26 November 1750, when a vote was being made for the Elder Brothership of the Trinity House.  The two contestants were Savage Mostyn and Sir Peter Warren and the vote was equal until Admiral Mathews arrived and gave his vote to Savage Mostyn.
Peter Warren started his naval career as an ordinary seaman in Dublin in 1716 when he was 13 years old.  He rapidly rose in the ranks, becoming a Captain in 1727. His ship patrolled American colonial waters to provide protection from French forces.  In 1744, he was made commodore and commanded a 16 ship squadron off the Leeward Islands, capturing 24 ships in four months and making a lot in prize money.  He was promoted to the rank of Rear Admiral of the Blue and given a knighthood.   He was second in command of the British fleet on the Devonshire at the Battle of Cape Finisterre. His conduct in the battle won him further fame, a promotion to Vice-Admiral of the Red.  He died in Dublin in 1752.