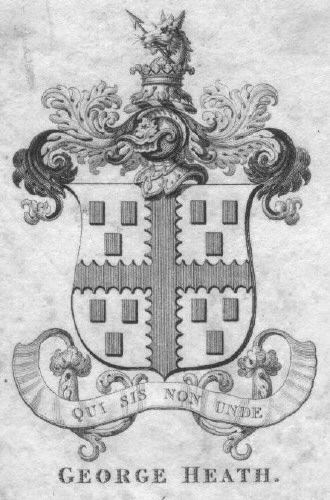 The latin motto is Qui Sis Non Unde.  This seems to mean something like Think of who you are and not where you came from.

Some books with this bookplate may have ended up in the Linley Wood library after having been inherited by Maj Gen Frederick Crofton Heath-Caldwell.  Many of the Linley Wood library books were distributed among family members in 1913 but the majority were dispersed in 1949 when Capt CH Heath-Caldwell sold the Linley Wood estate.  At this time some of the more valuable books were sent for auction at Sothebys however the majority were sold at the auction of the contents of the house which was held at Linley Wood.  I have over the years been able to buy back a number of these books which have come up for sale on the internet.  If you have any books with this bookplate please do contact me.