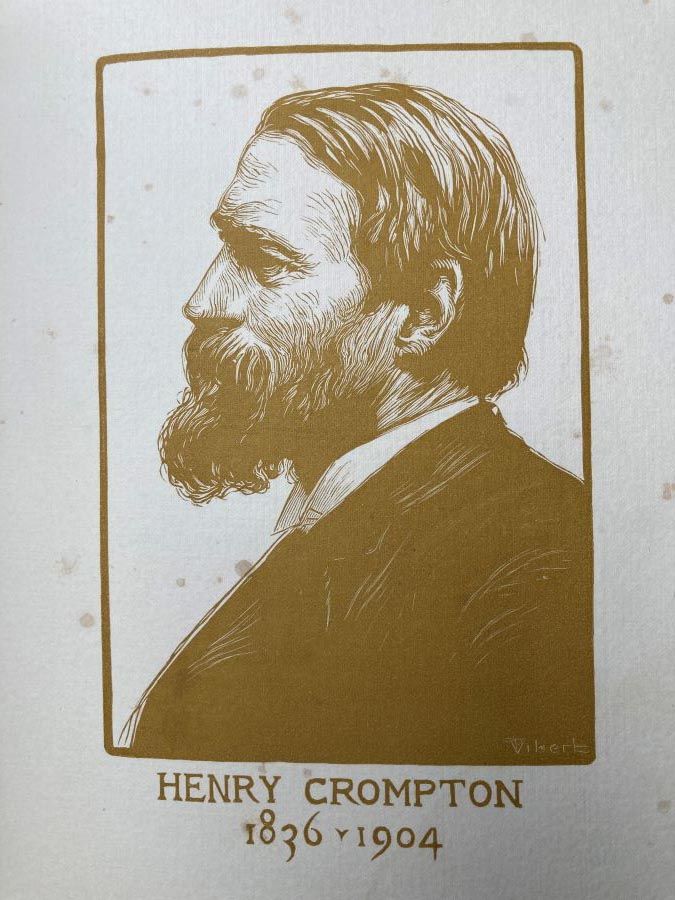 There are a lot of references on the internet to Henry Crompton.

Henry Crompton, 1836-1904 , was the son of Sir Charles Crompton  and Caroline Fletcher. He married, in 1870, Lucy Henrietta Romilly, daughter of Sir John Romilly, Baron Romilly and had issue two sons, Paul Crompton and David Crompton. Henry and Lucy were probably introduced by their two fathers who were both Queen Victoria's Commissioners for continuing the Chancery Inquiry of the Ecclesiastical and other Courts. Sir John Crompton was a Justice of the Court of Queens Bench and this background must have led to Henry becoming a barrister.

Henry Crompton is recorded as being a Barrister and Positivist. The Positivists played a leading role in the UK in legitimising the role of trade unionism in law. His contempories in this cause were the Positivist intellectuals, A.J. Mundella, Edward Spencer Beesly, Frederick Harrison and Godfrey Lushington. Henry Crompton was the legal adviser to the Parliamentary Committee regarding the Trade Union Bill in the House of Commons.

References to this work from 1871-1877 can be found in the book "Currents of Radicalism: Popular Radicalism, Organised Labour and Party Politics in Britain, 1850-1914" edited by Eugenio F. Biagini and Alastair J. Reid.

Page 110 - Hitherto, the historiography of the trade union reforms of 1871-7 has emphasised the role of the Positivist intellectuals: Beesly, Harrison, Crompton and Lushington. This has led to a neglect of the relationship which evolved between the trade union leaders and the 'friends of labour' in the House of Commons.

Page 128 - Henry Crompton, the Positivist legal adviser to the Parliament Committee, informed George Howell that he thought very well of the proposals although this would not prevent criticism of 'the secondary and financial proposals.' Crompton concluded, 'It is a very important fact to note&ldots; these bills do not re-enact the CLA Act. If they were to pass into law we still keep up the demand for the repeal of the act.' This was the line adopted by the Parliamentary Committee at a series of meetings, at which Mundella, Harrison and Crompton attended. On 24th June, a few days before the second reading of Cross's bills, the committee voted in favour of supporting the legislation with a view to amendment during the committee stage.

Page 130 - At a full meeting of the Parliamentary Committee on 5 July, with Mundella, Crompton and Harrison in attendance, it was decided to support Lowe's new clause, 'as the recognition of a principle for which we have long contended, namely the abolition of special class legislation.'

Henry Crompton is also mentioned in "The History of Trade Unionism," By Sidney Webb and Beatrice Potter Webb - 1902 Published by Longmans Green and Co.

Page xxxiv - indebted for the loan of many scarce pamphlets and working-class journals, whilst Mr John Burnett and Mr. Henry Crompton have been good enough to go through&ldots;

Page 247 - Mr Henry Crompton was bringing his acute judgement and his detailed experience of the actual working of the law to bear upon the dangers which beset the Unions in the Courts of Justice.

Henry's role in the legitimising of Trade Unions is mentioned in E.Renals book, "Reconciling Unions and the Law, "There is no reason to doubt the importance which has been attached to the intervention of the Positivist lawyers at this point. In October 1867 Henry Crompton and Godfrey Lushington drafted the Trades Societies bill for the Conference of Amalgamated Trades as 'a declaration of principle.' They set out in legal language how unions might be declared lawful, and in a way that parliamentary opinion was likely to find acceptable. Unions would be allowed, if they wished, to take advantage of the Friendly Societies Acts, but would not become corporate bodies, nor would they be empowered to sue or be sued by their members. This was as unrestrictive as any measure of legalization could conceivably have been. No alterations to union rules were required. Nor was there to be any interference in their internal management. Factional squabbling within London trade unionism delayed total agreement on the bill until the end of October 1868. In June, however, the provincial trades at the first Trades Union Congress, held in Manchester, agreed that the proposed bill was an acceptable settlement. James Nasmyth, the Manchester engineer celebrated by Samuel Smiles, gave evidence to the Erle commission on the same day as Mundella. He described how he refused to meet his men collectively, preferred individual saving to the mutuality of benefit societies ('I think it is better for every man to be his own benefit club'), and urged that society would benefit from a wider diffusion of 'the Robinson Crusoe feeling.' It was, Henry Crompton commented, an expression of the 'individualist' theory in it 'most naked and repulsive form.'

Henry's role is also mentioned in "Government, Labour and Law in Mid-Victorian The Workman's Victory" by Mark Curthoys, on page 221 " . . . Crompton's paper was a penetrating analysis of the commissioner's methods and assumptions, and fulfilled the same role as Frederic Harrison's minority report to the Erle commission. Crompton brought two distinctive insights to bear. Both professionally, as a clerk of assize, and by upbringing as the son of a distinguished common lawyer, Sir Charles Crompton (who as late as 1855 had held trade unions to be criminal conspiracies), he had an especially acute perception of the failure of judges to 'comprehend the ideas and views of the working-class.' Yet he also possessed a deep personal reverence for the higher courts and the men who presided over them. He believed that judges genuinely sought to be impartial, but that their misconceptions of individual matters led them into a false position when the respective rights of labour and capital were in contention.

In a series of articles to members of the agricultural labourers' union, Crompton tried to impress upon them that in most respects the law protected the poor as much as the rick. It was in their interests that the law should be as strong as possible and the authority of its administrators upheld. Equally, though, the unfairness in labour cases needed to be addressed. He was accordingly vehement in his criticisms of the principles which underlay the Cockburn commission report, highlighted by its unreflecting use 'of the old legal-economical language' about unrestricted competition being in the best interests of all. He instanced the commissioners' refusal to recognize the inequality of the relationship between masters and individual servants, their one sided concern with employers' interests

Henry is mentioned in the book "The Positivist Review" of 1923 by Edward Spencer Beesly and quite a number of other books including  "Random Recollections of the Leicester  Secular Society" by Sydney A. Gimson  in 1932 "Positivists, Individualists and Socialists,"  "When I first began working with our Secular Society there was a group of earnest members of the Society who belonged to the Positivist movement. Some of them formed the backbone of our Sunday School. I think I may say that the leader was Mr. Findley, a second-hand bookseller living over his shop in High Street. He had followed his father in the business and they were both well known men, much respected in the town. Though not belonging to the group (which included Mr. Franks and Mr. Cornish; the latter fortunately still an honoured member of our Society) I was often invited to meetings at Mr. Findley's home where I met Dr. Congreve, Dr. Carson, Mr. Henry Crompton and others and was much impressed by their learning and humanity; they were charming people whom it was a privilege to know. Dr. Carson and Mr. Crompton lectured in our Hall. I cannot remember that Dr. Congreve ever did so.

Dr. Carson and Mr. Crompton stayed with my wife and me more than once. I remember that Mr. Crompton told us that he was once present, at George Eliot's home, when she and Herbert Spencer had a discussion concerning the origin of music. Crompton thought that Spencer was getting the worst of the argument and eventually he jumped up and rushed out of the room, banging the door after him! Crompton said that he enjoyed seeing the great philosopher in a temper and recognising that he was subject to the same human weaknesses as the rest of us.

Henry Crompton appears to have written a number of books and political and religious pamphlets  on the subject of Trade Unionism. These include:-

Published by H.S.King and Co.

Our Criminal Justice - By Henry Crompton. 1876, Co-operative Printing Society. Published under the auspices of the Parliamentary Committee of the Trades Union Congress, and strongly recommended by them to working men.

Henry Crompton appears to follow on from James Stamford Caldwell in promoting the concept of Arbitration. James Stamford Caldwell's Treatise on the Law of Arbitration was printed in 1822. In Thomas Humphry Ward's book, "The Reign of Queen Victoria: A Survey of Fifty Years of Progress" 1887 on pge 79 - Mr Henry Crompton says: 'About the year 1830 the principle of arbitration was advocated as the best means of insuring peace between labour and capital.  Arbitration is again mentioned in Victor Leonard Allen's book "The Sociology of Industrial Relations: Studies in Method," 1971, on page 68 - 'In addition arbitration, without the existence of standing provisions, became popular. A recognised group of arbitrators emerged consisting largely of A.J. Mundella, MP, Judge Rupert Kettle, Thomas Hughes QC, Henry Crompton, Lloyd Jones.' And  on page 71 - 'A common explanation by contemporary participants and observers of the rise of conciliation and arbitration was that after decades of bitter conflict reason was being applied to industrial relations. Prior to 1860 wrote Henry Crompton in 1876.' Henry's grandfather, Peter Crompton was a business associate of James Caldwell, Stamford's father, as well as being a relative. The Marsh-Caldwell's maintained links with the Crompton family for many years and photos of the Cromptons are in their photo albums from this time so Henry may have been well aware of James Stamford Caldwell's work on arbitration from this connection as well as their mutual legal connections in London.

Henry's involvement with the concept of arbitration is also mentioned in "The Origins of Modern English Society", By Harold James Perkin on page 400 - "Similar bodies appeared during the 1860's in the Wolverhampton, Leeds, Manchester, Coventry and Worcester building trades, Nottingham lace, Leicester hosiery, the Staffordshire potteries, the glass bottle industry, and the North of England iron trade. Meanwhile, informal arbitration was popularized by an accepted group of arbitrators, including A.J. Mundella, who originated the Nottingham hosiery and lace boards, Judge Rupert Kettle, the Christian Socialists Thomas Hughes and Lloyd Jones, and the Positivist Henry Crompton. In the 1870's an 'arbitration craze' was talked of, and by 1875, when the National League was formed, there was, according to a modern expert, 'barely a trade where trade unions existed which did not have either a standing joint committee of employers and workmen to settle disputes, with provision for arbitration on an ad hoc basis."

Other commentators on the role of the working class in society were Karl Marx and Frederich Engels. Henry Crompton disagreed with them over the concept of the working class being politicized. Marx's and Engels' Concepts of the Parties and Political Organisations of the Working Class, by Jukka Paastela, 1985, published by University of Tampere on page 233 - "Engel's article on the need for an independent workers party was a reaction to a leader in The Labour Standard by Henry Crompton where he again demanded that the workers must abstain from party policy, although they should be elected to parliament - about how this should happen, Crompton wrote not a word -  because party policy 'dwarfs the imagination, narrows . . . " 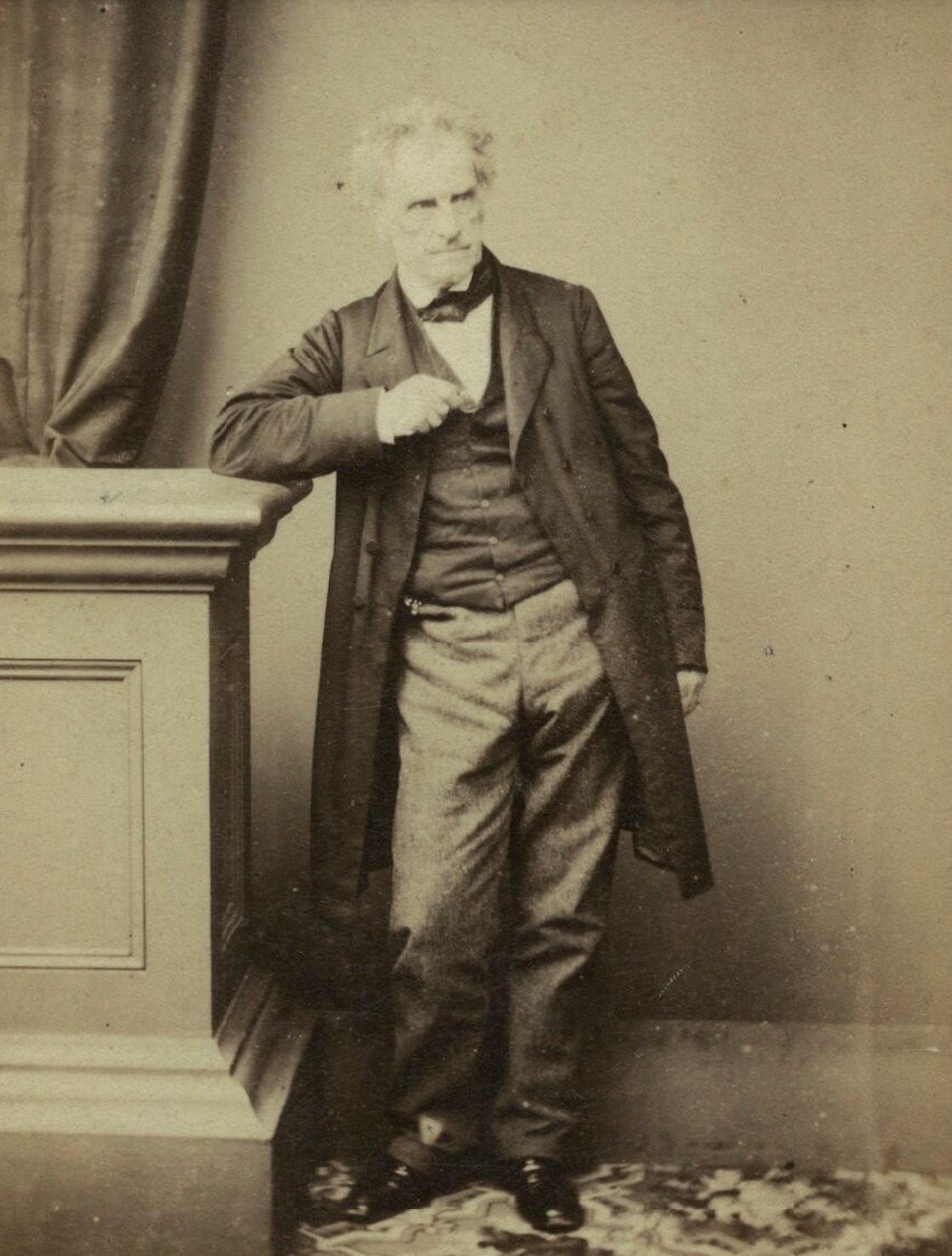 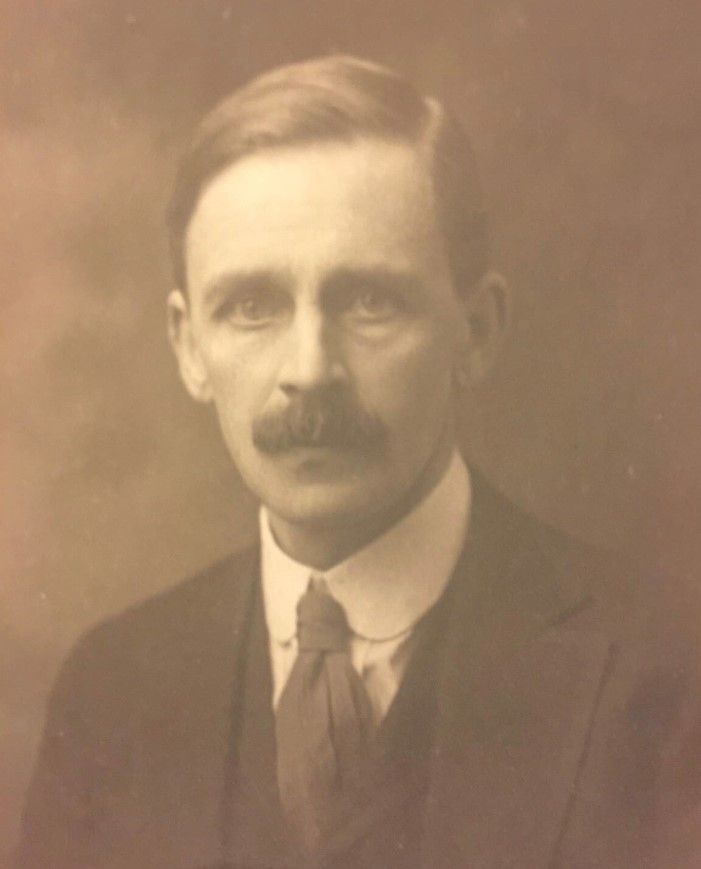