Who were Mr & Mrs John Cuthbert and who was Mrs Hopkins? 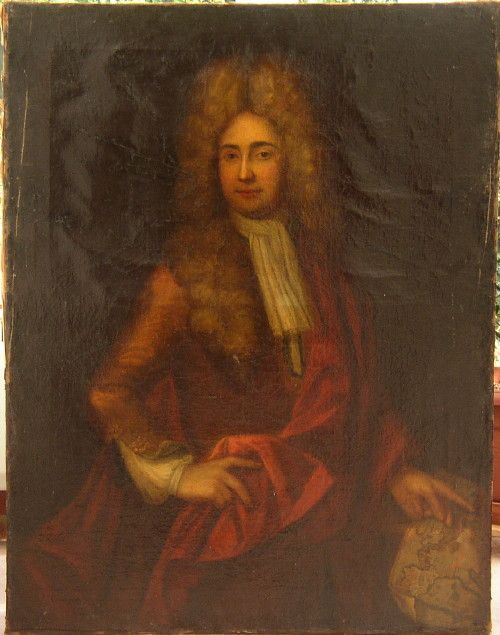 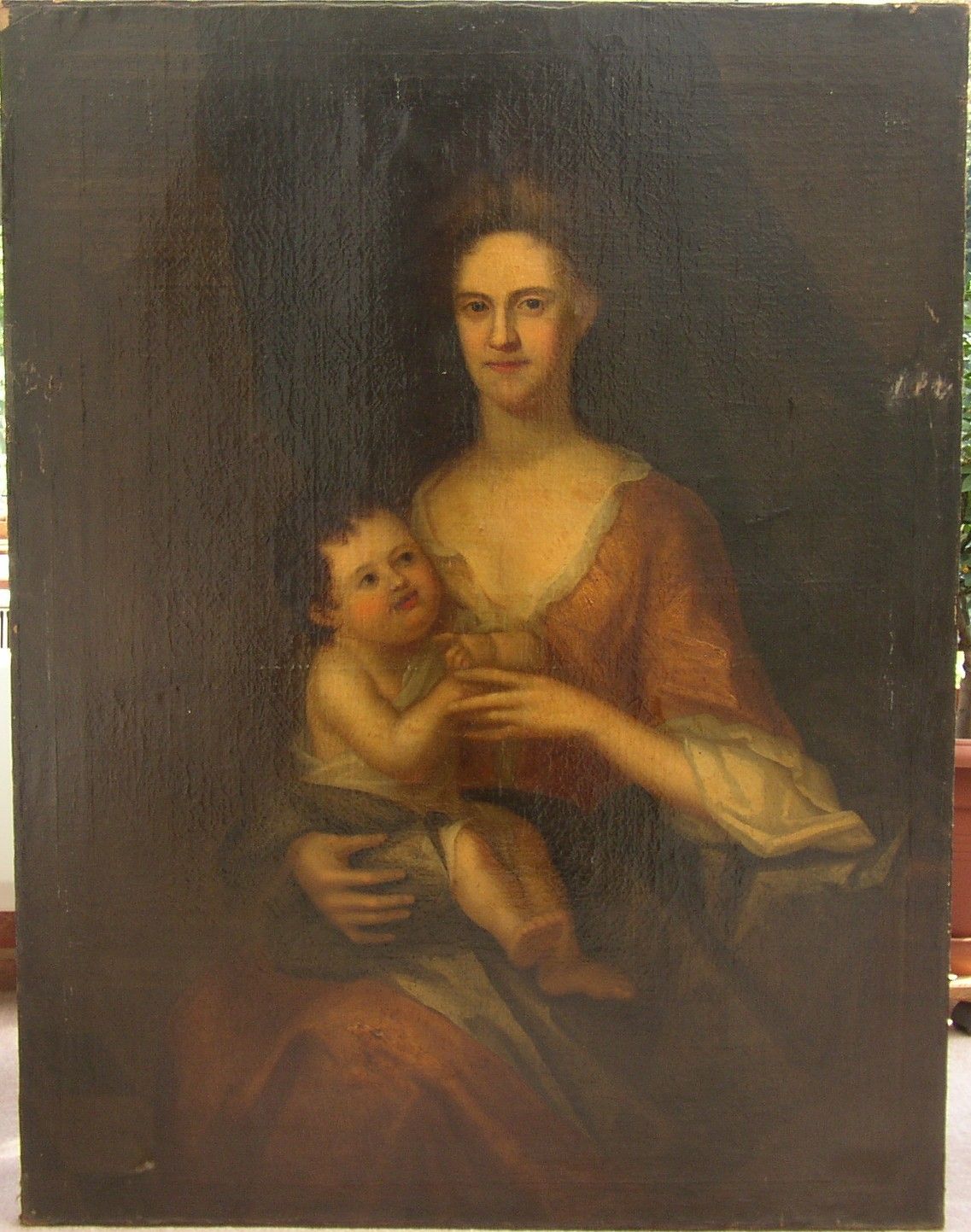 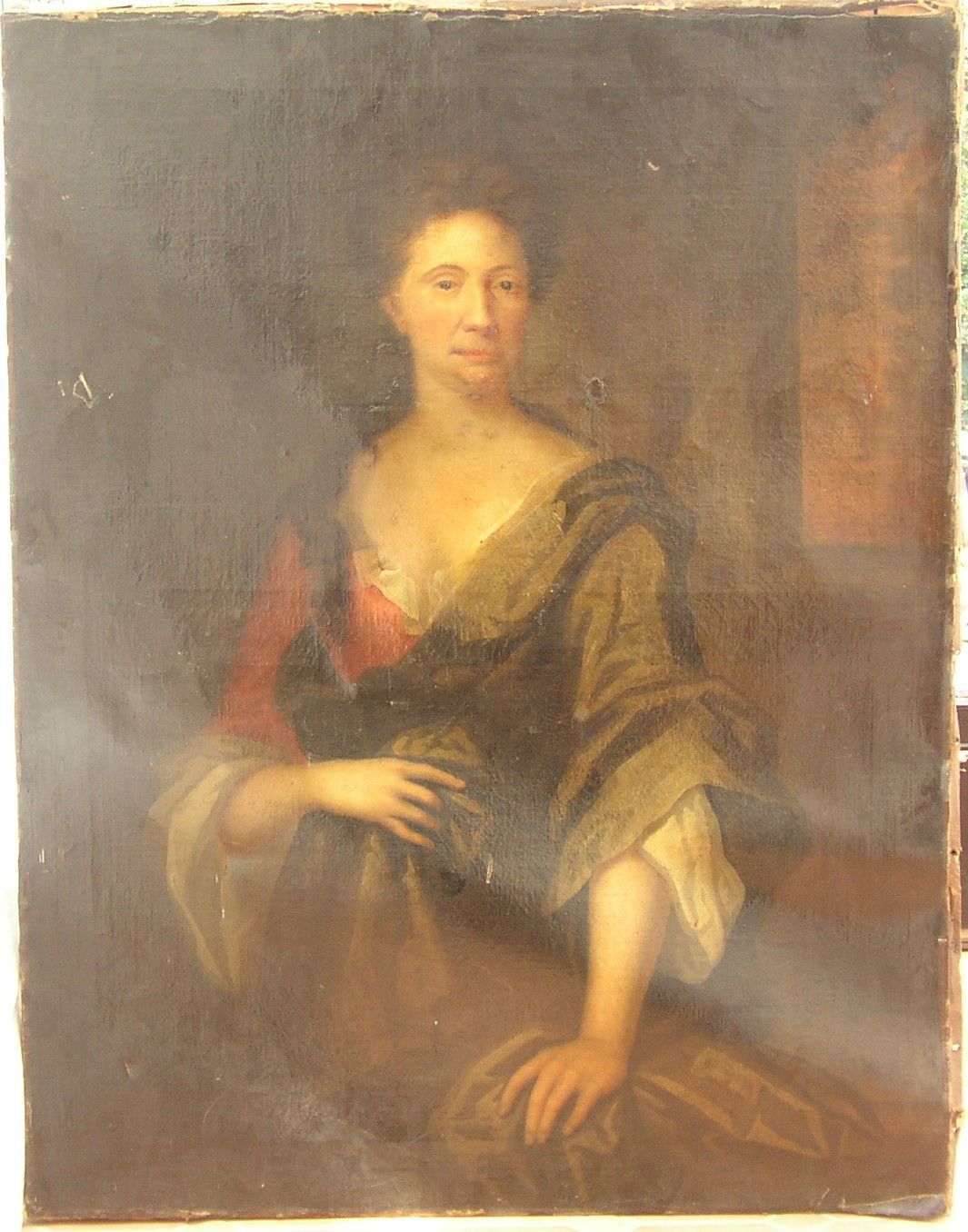 In 2007 I bought at auction a set of three large portraits of Mr & Mrs John Cuthbert and his daughter (or sister or sister in law) Mrs Hopkins, painted around 1700.  I would be very interested if anyone on the internet can provide any information or a guess as to who these people were.  My interest is in my ancestor Arthur Cuthbert (1734?-1788) who was a very wealthy man but I have no knowledge of who his parents or grandparents were.  Arthur married Sarah Hopkins the daughter of Capt Charles Hopkins and Phillis Hopkins.  Could Mr & Mrs John Cuthbert be the grandparents of Arthur?

The John Cuthbert who commissioned these portraits must have been a rich man as the portraits are very large (96cm x 126cm) and they are of reasonably high quality.

On the back of the portrait of the lady holding a baby is written 'Mrs John Cuthbert 1700' and on the  back of the other portrait of a lady is 'Mrs Hopkins daughter of Mr John Cuthbert'.  The portrait of a gentleman does not have anything written on it but we can assume that it will be John Cuthbert.  The paintings all appear to have been painted at the same time and from the style of the clothes the date 1700 looks very likely.  Mrs Hopkins seems a bit old to be John's daughter and is more likely to be his sister or sister in law or mother or mother in law or aunt.

The picture of Mrs Cuthbert just has the one child and the image of the child may have been added, indicating that the child was born around 1700 or shortly afterwards.  Presumably this was her first child or else other children would have been included in the picture.

One thing to note is that in the above portrait John Cuthbert is pointing with his index finger to a place on a map of Europe so presumably he had some link or association possibly with Germany, Norway, Sweden, Finland, Scandinavia, Prussia?  At the same time he appears to have one of his other fingers pointing to a northern part of England's east coast around Newcastle Upon Tyne.

Assuming that the information on the back of the picture is reasonably correct, there would appear to a number of John Cuthberts alive during this time but only one with the financial resources to afford to have these portraits painted, John Cuthbert of Herrington, Sunderland.

John also had a grandson called Lewis Cuthbert (1737-1802)  who witnessed Arthur Cuthbert's will .
It is quite possible that the family in the above portraits are related to Arthur Cuthbert (1734?-1788) but we need to find the link?
Another relative of Arthur Cuthbert is James Ramsay (Ramsey?) of Edinburgh who Arthur mentions in his will as a cousin.

The most likely possibility is John Cuthbert of West Herrington, Durham and Newcastle Upon Tyne.
In the Portsmouth Record Office there is a document PCRO X/11A/P/4/5 which is the Carter Pedigrees by AT Everitt.  The Cuthbert pages are at p33 and 34.  This lists a Robert Cuthbert of Castle Hill.  He had a son William Cuthbert.  William in turn had two sons:
1. James Cuthbert of Marton Hall, Clevedale (born 1670 and married ? 1694).
2. John Cuthbert of West Herrington, Durham (1675-1724), Sergent at Law, Recorder of  Newcastle upon Tyne.  John married Dorothy Spearman daughter of John and Elizabeth Spearman.

I have done a bit of searching on the internet and have found a few other Cuthberts of interest.

There is a will of a John Cuthbert, Gentleman of Wisbech in the Isle of Ely, Cambridgeshire, died 16 May 1729.  He made his wife Anne Cuthbert his executor and left her his money.  He also left his son Sowter (John) and daughter Anne Cuthbert the sums of £500 each and 5 guineas to his brother Thomas Fairfax.  He first refers to his son as Sowter and then as John?  John signed his will in Feb 1728.

There was also a John Cuthbert buried in Madras 29 November 1754.  He is noted as a Sailor, HMS 'Bridgewater'.

Were any of the above Cuthberts related to Arthur Cuthbert (1734?-1788)?  Are there any more John Cuthberts?  Presumably Arthur Cuthbert's parents were Scottish and hence there are no records of them at Kew. 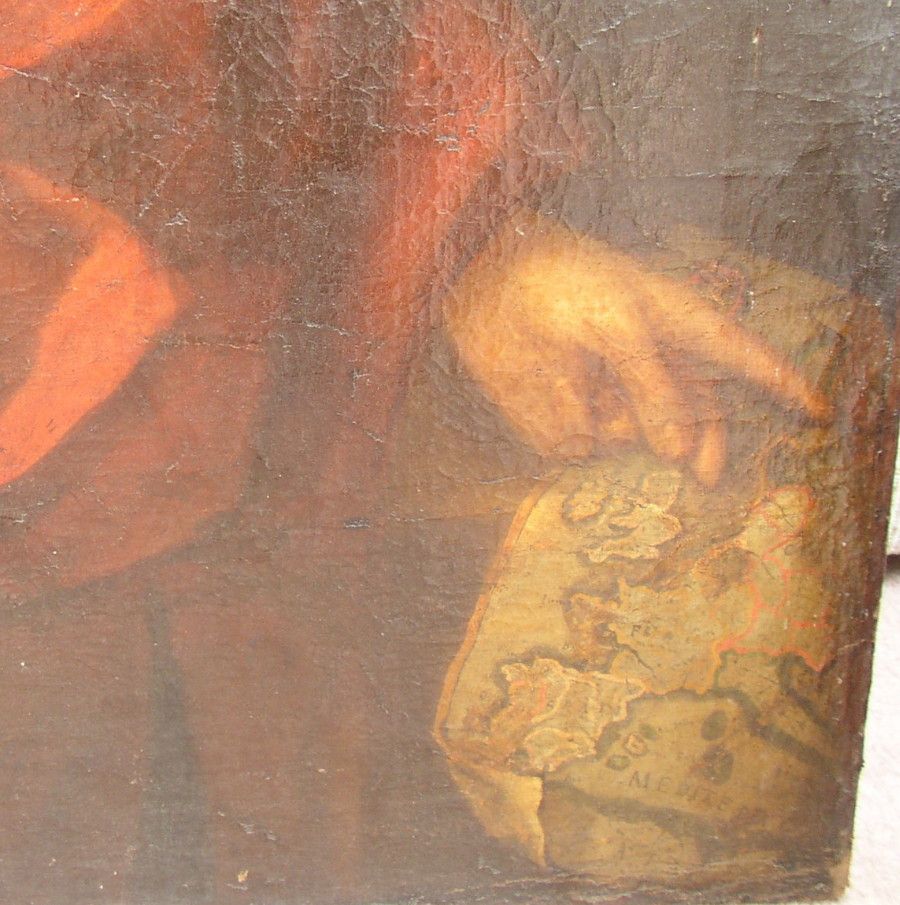 Detail John pointing to his map

If you have any information to add to the above please do contact me.