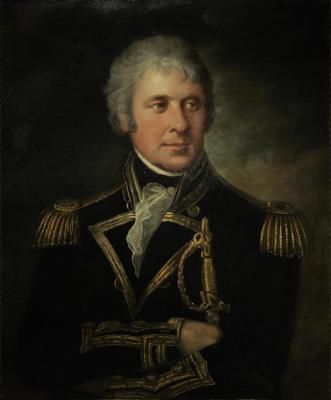 Arthur Cuthbert (1734?-1788) had a brother Alexander and this brother had a third son Robert Cuthbert.  Robert is mentioned in Arthur's will (1787) but this is the only family reference to him that we have.  He may have been Captain Robert Cuthbert, 7th Foot, who died of wounds, 19th March 1812, in the Penninsular War in Badajoz, Spain.

There was a Captain Robert Cuthbert who was in the Navy, born 1755 or 1759 and died 1821.  At this point in time I am not able to establish if he was related to Arthur Cuthbert or Lewis Cuthbert .

The portrait of him above was I understand sold in an auction in America in 2006 together with his sword and his dirk.  Captain Robert Cuthbert (RN) allegedly painted c 1812.

I have recently been contacted by Des Bennett who has also has a portrait of Captain Robert Cuthbert which is the same as the portrait mentioned above.  Des does not know how Robert Cuthbert relates to his family but the link could be via Rosamund Cuthbert (1834-1867) who was an ancestor of Des.  Rosamund married Samuel Greg Rathbone.  Rosamund had a father referred to as Col Cuthbert who was resident at Cheltenham.

Some more information supplied to me by Stephen Wood is as follows:
Some doubt surrounds the date of birth of Robert Cuthbert because the surviving records do not agree. In the papers attached to his Lieutenant's Passing Certificate of 1793 (National Archives: ADM 107/17, p.73), his date of baptism is given as 17th November 1759, the baptism is said to have taken place in the parish church of 'Chilsworth, Suffolk', and his age is given as thirty-three. Local research has revealed that his baptism actually took place in September 1755. 'Chilsworth' is now spelt 'Chelsworth' and is a village mid-way between Sudbury and Stowmarket: it is also one of the many villages in that county that now vie for the title of Most Beautiful Suffolk Village. What is not in doubt is that Robert Cuthbert was the son of John Cuthbert, then spelt 'Cutbert', and his wife Sarah. His father owned property in Nedging, near Chelsworth, and was a maltster. Maltsters make malted barley from barley, the result being used in the beer-brewing process, and so, in a beer-drinking nation such as England, maltsters were usually prosperous, except in times of poor harvests. It may have been the run of poor harvests in southern England in the first half of the 1770s that necessitated Robert Cuthbert seeking a career outside the malting world in c.1775- 76.