Of Madras, India and Woodcott, Surrey. 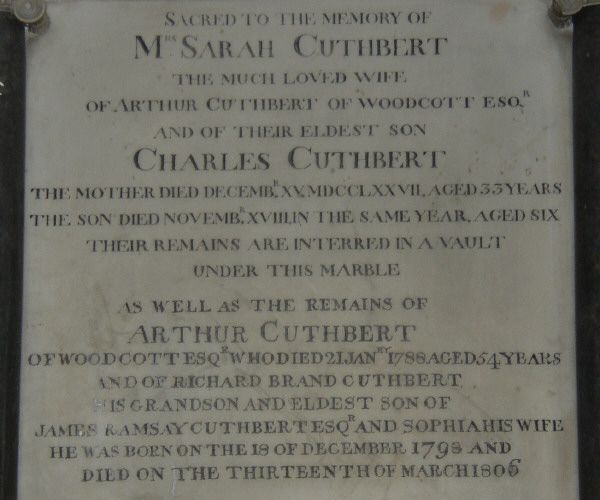 It looks like Sarah spent much of her life out in Madras, India.  Her sister Amelia married Gen Richard Smith.  Richard also took a liking to Sarah and she became pregnant.  This must have caused a few difficulties within the family.  Sarah could not marry Richard as he was already married to her sister Amelia.  Her illegitamate daughter was born and they named her Amelia after her aunt.  Arthur Cuthbert then stepped in and married her and took the child as his own daughter. Arthur made lots of money and was able to return to England and purchase Woodcote Manor in Epsom in 1777.  Sadly, in the same year, Sarah died at the young age of 33 and she is buried at Epsom.

The will of Sarah's mother, Phyllis (or Phillis) Bright, provides some additional information.  She refers to Arthur and Sarah as her oldest son and daughter.  She appears to leave most of her estate to her younger son Charles Hopkins and his wife Martha Hopkins.  She mentions a nephew George Stratton of Great Tow in Oxfordshire.  She also mentions her grandchildren, John Mannseur Smith, Sarah Brook and James Ramsey.  She refers to James Ramsey has having a wife Mary and them both living at Bath.  She also leaves money to Ann Burnisby Cridden of Southampton.  The executors are William Marsh, Alexander Cuthbert and Samuel Hawkins of Pall Mall.  Her will is dated 16 and 27 December 1794 and it is proved 14 February 1795 so she must have died between these to dates.

Sacred to the memory of Mrs Sarah Cuthbert the much loved wife of Arthur Cuthbert of Woodcott Esq and their eldest son Charles Cuthbert.  The mother died December 15, 1777 aged 33 years.  The son died November 18 the same year, aged six.  Their remains are interred in a vault under this marble.  As well as the remains of Arthur Cuthbert of Woodcott Esq who died 21 Jan 1788 aged 54 years and of Richard Brand Cuthbert his grandson and eldest son of James Ramsey Cuthbert Esq and Sophia his wife.  He was born on the 18 of December 1798 and died on the thirteenth of March 1806.