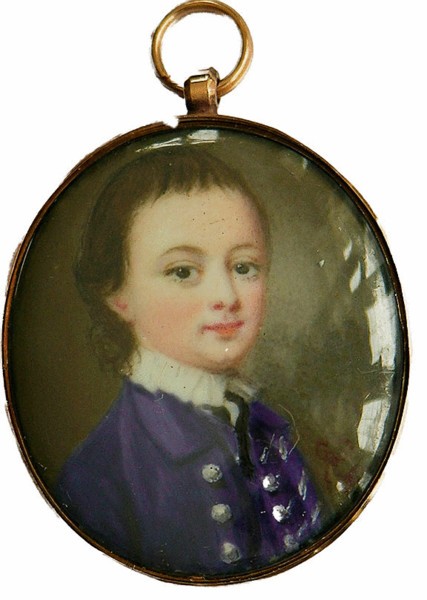 Henry Vansittart wearing purple coat with silver buttons, matching waistcoat, frilled white collar and black ribbon tie.  Enamel, signed on the obverse with initials and dated G.S/ 176?, gilt-metal mount.  Oval, 30mm high.  Provenance: Nicholas Vansittart, 1st Baron Bexley (1766-1851).  Gifted to his great-niece Teresa Vansittart in 1832 then by family descent.  According to a letter dated 4 July 1836 from Nicholas Vansittart, 1st Baron Bexley to his great niece Teresa, the present lot and lot 123 by Nathaniel Hone depict her grandfather, Henry Vansittart and his brother Arthur Vansittart. Given the apparent age of the sitters, it seems most likely that the Hone depicts the younger of the two, Arthur and therefore the present lot, Henry.  The boys were two of the five sons of Henry Vansittart (1732-1769/70), Governor of Bengal and his wife Amelia Morse, whom he had married in 1754.  Their father Henry died when the Frigate 'Aurora' was lost off Cape Town in December 1769 on its return to India.