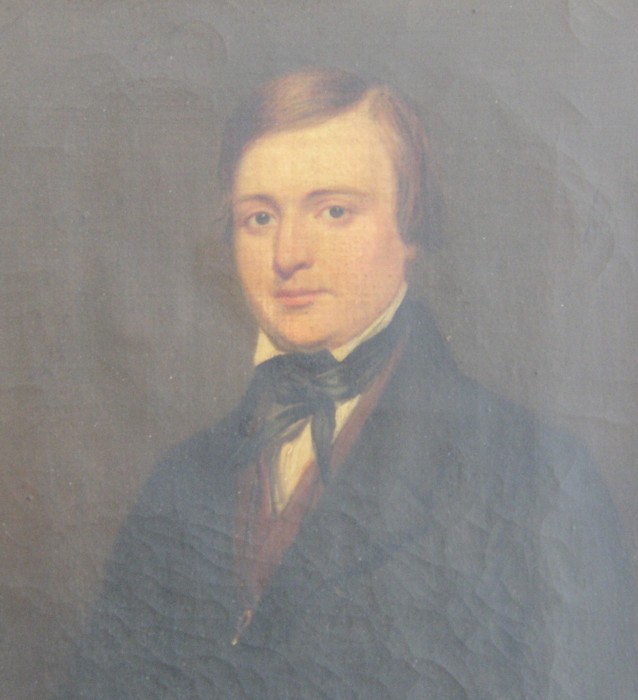 A note on the back says: 'John Harvey Ensign 82 Foot, painted by G Clint January 1844, for Miss Montague and presented by her to Lady Harvey'.

John was the son of Charlotte Mary Lady Harvey (1793-1869) and Maj Gen Sir Robert John Harvey (1785-1860).  Miss Montague appears to have been a very close family friend. It is recorded that in 1843 Miss Montague gave a silver cream ewer to Maj Gen Sir Robert John Harvey.  She was born in Jamaica around 1794 and was staying with Edward Kerrison Harvey in 1871.  One of Edward's sons was named after her, Edward Montague Chevalier Harvey (1861-1933).

George Clint (1770-1854) was a portrait painter and engraver.  There are 4 portraits of him in the National Portrait Gallery in London and a number of other works by him mainly portraits but also a number of works of other artists but engraved by him.  He began his career as a miniature painter in Leadenhall Street, London.  He learned the technique of mezzotint engraving from Edward Bell, the nephew of John Bell the publisher. George first exhibited at the Royal Academy in 1802, but it was not until the 1820s that his career began to flourish.  He established a reputation as a painter of theatrical subjects. George practised mainly as a portrait painter throughout his career, but he is also remembered for his theatrical scene paintings.  He was elected an Associate of the Royal Academy (ARA) in 1821; however, his lack of true historical style possibly prevented him from becoming an RA, and he resigned from the Royal Academy in 1835 after a series of scenes from Shakespeare failed to earn him the expected recognition.  George married the daughter of a small farmer in Berkshire and by her he had five sons and four daughters.  Of his sons, Raphael Clint (1797-1849), Scipio Clint (1806-1889) and Alfred Clint (1807-1883) also became artists of varying degrees.

If anyone can add more information about the above I would be very pleased to hear from you.  Please contact me This email address is being protected from spambots. You need JavaScript enabled to view it.