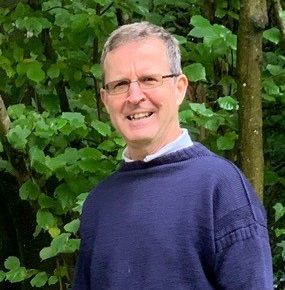 Many visitors to this website have asked "who is JJ Heath-Caldwell" and "how am I related to many of the people listed on this family history site".  Here is a brief overview.

I have a sister Hilary and a brother Michael.

I was born in 1959 in New Zealand, and was brought up there, going to school in Stratford and Wanganui.  I completed a BSc in Physics at Otago University in Dunedin and then left New Zealand in 1980 on a one year working holiday, taking up a job as an Electronics Engineer.  In some ways I am still on my working holiday, having had a brief period of working in Egypt and Oman in the early 1980s followed by a fairly settled time in the UK.  I am a Chartered Engineer and have spent much of my life in the electronics industry however these days I run an internet business which consists of a website that provides a national network of Surveyors and other Property Professionals, see  www.localsurveyorsdirect.co.uk .

I do from time to time give talks about some of my various ancestors and their relatives.  If this is of interest please contact me.  Talks to date include the following:
Admiral Sir Leopold George Heath.
James Caldwell of Linley Wood.
Anne Marsh Caldwell.
James Heath and his family.
The Linley Wood Library and the Caldwell Family.
History of the English in India 1612 to 1947.

One of the reasons behind setting up this family history website was that I wanted to find out more about how the internet worked.  By the year 2000 the internet had not yet become part of everyone’s life but it was easy to see how much of an effect it was going to have and in particular the way that it was allowing people to easily source obscure information.

A few years later I was operating as a Sales & Marketing consultant and a friend of mine asked if I could help him with his Surveying business.  He was operating from an office and had over a ten year period built up a network of Building Surveyors covering the UK.  He was a ‘middle man’ in that he placed adverts in the Yellow Pages and customers from all over the UK would telephone his office and book a survey.  He in turn would then contact the nearest Surveyor covering the area and place an order for the Survey to be done.  The customer would be happy, the surveyor was happy and my friend who owned the business took a proportion of the order value on each job and so he of course was also happy.  At the time many businesses operated in this way, even though the process was often slow and expensive.  Of course customers really wanted to place orders directly with suppliers but it was often very difficult to find a local supplier and hence the reason that the ‘middle man’ company was able to flourish.

While helping my friend out I was speaking to one of his customers who was looking for a Surveyor.  This customer did not want to work through a ‘middle man’ company.  He said “What I want is a website offering surveyors that operates directly.   I just want to put my property details and my contact details into it and then I want it to immediately come up with half a dozen sets of estimates directly from Surveyors.  I then want to be able to contact the Surveyors directly and I want them to be able to contact me directly”.

Afterwards I mulled this over and then thought, what an exceedingly good idea!  I could see that with the rapid take up of the internet it would become much easier for customers to make direct contact with suppliers.  All that was missing were the specialised websites that would make this possible.

The idea behind Local Surveyors Direct came to me around this time and together with three other partners we formed the company and went on to launch the website in March 2005.  Initially we just offered Building Surveys and the system was populated by a number of Building Surveyors who were happy to participate on a no obligation basis.  Luckily the system did actually work and customers started finding suppliers directly through the website.  The Surveyors started getting orders and once they were confident they started paying for the service.  From May onwards we started receiving cheques in the mail and our new business model was proven.

I still get a lot of pleasure out of seeing my family history website grow and from seeing the Local Surveyors Direct business grow.  One is my job and one is my hobby but the distinction between the two is sometimes a bit blurred.

I am also involved with Rotary (www.winchester-rotary.org) and the Clarendon Marathon (www.clarendon-marathon.co.uk).

I have written a book about my early life growing up in New Zealand from 1959 to 1979.  This is available in full to read on line here: The Ups And Downs Of Jeremy James.