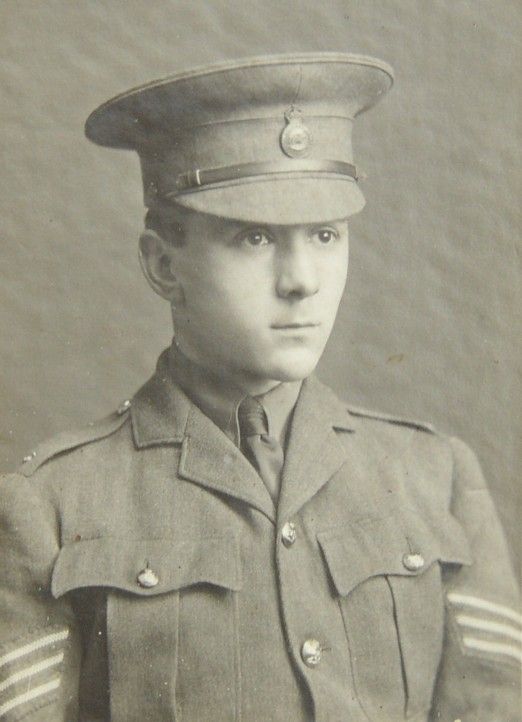 The following account is from the book "Records of the Heath Family" Vol 1 and Vol 2.

Martin Frederick, born at Holmwood Oct. 24th, 1893, was educated at Winton House, Winchester, and Wellington College; in 1911 he passed into the Royal Military Academy, Woolwich.

He received his commission in RFA, December 19th, 1913, and went out with the 1st Division from Aldershot in August, 1914, as a 2nd Lieutenant in No 117 RFA.  He served in that battery until January, 1915, when he obtained his jacket, and served in the Chestnut Troop, RHA (Royal Horse Artillery), until killed in action on May 16th, 1915, near Richebourg L'Abone.  He is buried in Bethune Cemetery, and subsequently mentioned in despatches. 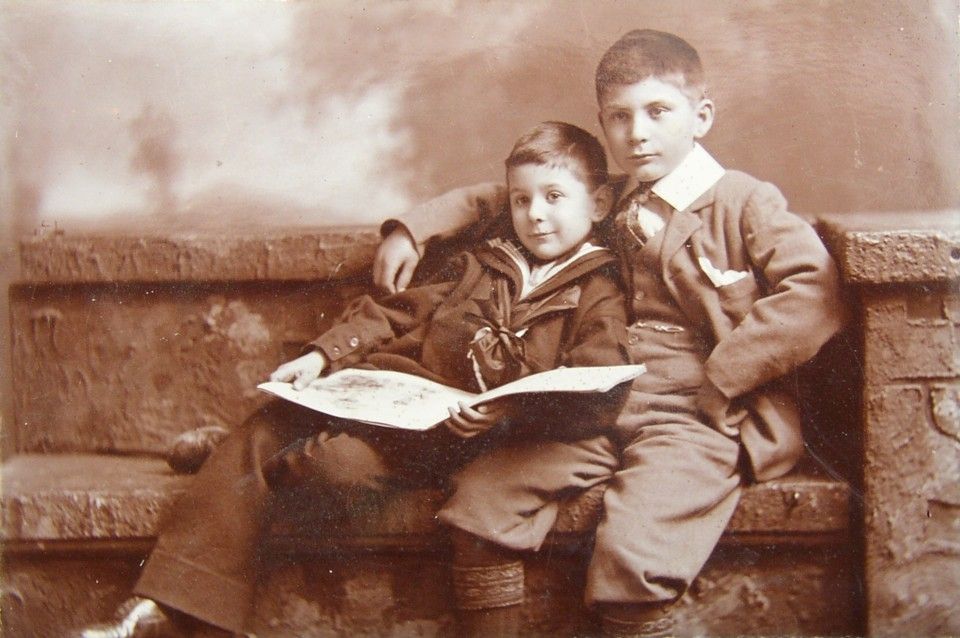 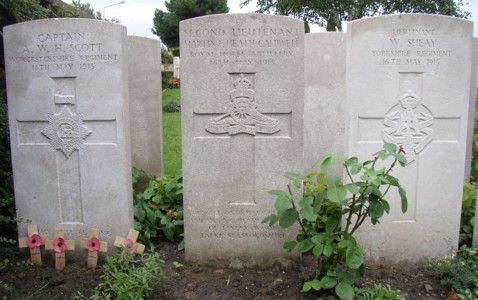 RA Mess
Rollestone Camp
Amesbury
Thursday Evening, May 13 1914?
My Dear Cuthbert
I always seem to leave my scribble to you till the last moment, in fact, I expect this will be too late to catch the last post.  We finished our practice today with a "brigade day" The &ldots; was very pleased with the &ldots; performance on Tuesday & I think the Brigade did pretty well today.  The weather had been bloody, but then we had such a splendid week to begin with that we cannot well complain.  Tomorrow one of the batteries of the 5th brigade are &ldots; to troop off for the purpose of experimenting as to the observation of fire by aeroplanes - so I think we shall have a fairly slack day.  Lately life has been a bit strenuous.  We start trekking back on Saturday, staying at Trenton on Sunday - as we may not march on a Sunday.  I am writing after dinner.  It is very cosy in here - a good many people playing cards.  The &ldots; & majors do it for action - we always have a game of poker on.  However I think it is rather a mistake to play every evening as some people do.  Of course it is possible to be a little expensive - though one usually seems to keep about even on the whole.  The first night I was roped in at Aldershot I ended up about 11 shillings down, but have since recovered it!  I & John Tucker mobiked over to Portsmouth last Saturday.  Awfully pretty run then by Salisbury, Romsey, and Botely.  Found a host of cousins there, all rather owlish after prolonged ball dancing.  Under the "Skippency" of Phil Crofton we went for a sail on Spithead on Sunday afternoon.  John Tucker was violently ill which rather cast a gloom on the proceedings, & his bad example had a deteriorating effect on me & I didn't feel very happy coming back.  We had some adventures coming back here at night.  I &ldots; missed the hindquarters of a horse which was &ldots; the road near here.  One could not see him till right onto him.  John, according to his account, went slap into the animal - though I am inclined to think the bank, as the horse was not hurt.  Anyhow there was a crash and I hailed a passing car & put him into it & hid the bike behind the hedge where it was recovered by his servant next morning & having cursed the orderly on the horse proceeded without further incident.  Of course the silly ass with a shying horse ought never to have been riding along the road at night.  He could have easily rode along the fields at the side.  John was all right next morning &ldots; shaken rather & his knee knocked.  I am brigade orderly officer today & my first job is to go around the horses & turn out the guard sometime during the night.  The &ldots; no pleasant job on a wet night.  It took me an hour last time.
So no more now.
Yours etc
Martin

1915, 7p.m. Jan 20
My dear Mother
Your letters of 11th & 12th came today.  I have yet no orders, it really is most aggravating.  I must be patient.  I am longing to be off.  A new major has turned up.  I say this quite often don't I?  He seems a good sort, a "dug out" though, and doesn't know much about this sort of warfare I expect.  Fanshaw said yesterday he had sent a note to Ken Lindsay & done something else so I thanked him profusely, so I hope everything will be all right.  I spent a comfortable night at the observation station last night, got out of my flea by about 9.30a.m.!  I then drew a most beautiful panorama, so that we can show the &ldots; when he comes in next, in fact, a piece of "eye wash".  It is I think useful too as he can mark targets on it to which we have found the range and switch.  I am writing after dinner.  The major is a great spinner of yarns, has already spun about a dozen, mostly not repeatable in the drawing room!  He is now busy occupied in drafting a letter to Harrods who have been sending us stuff for the men over & above the value of the original deposit we paid out of Battery fund.  However we are so casual about these things that I am afraid we can hope to do little but "twist their tales".
Well no more now.
Your very affectionate son
Martin.