A Limited Edition of Historic Views of Hong Kong from 1847

Published by the Hydrographic Office, Taunton, 1991. 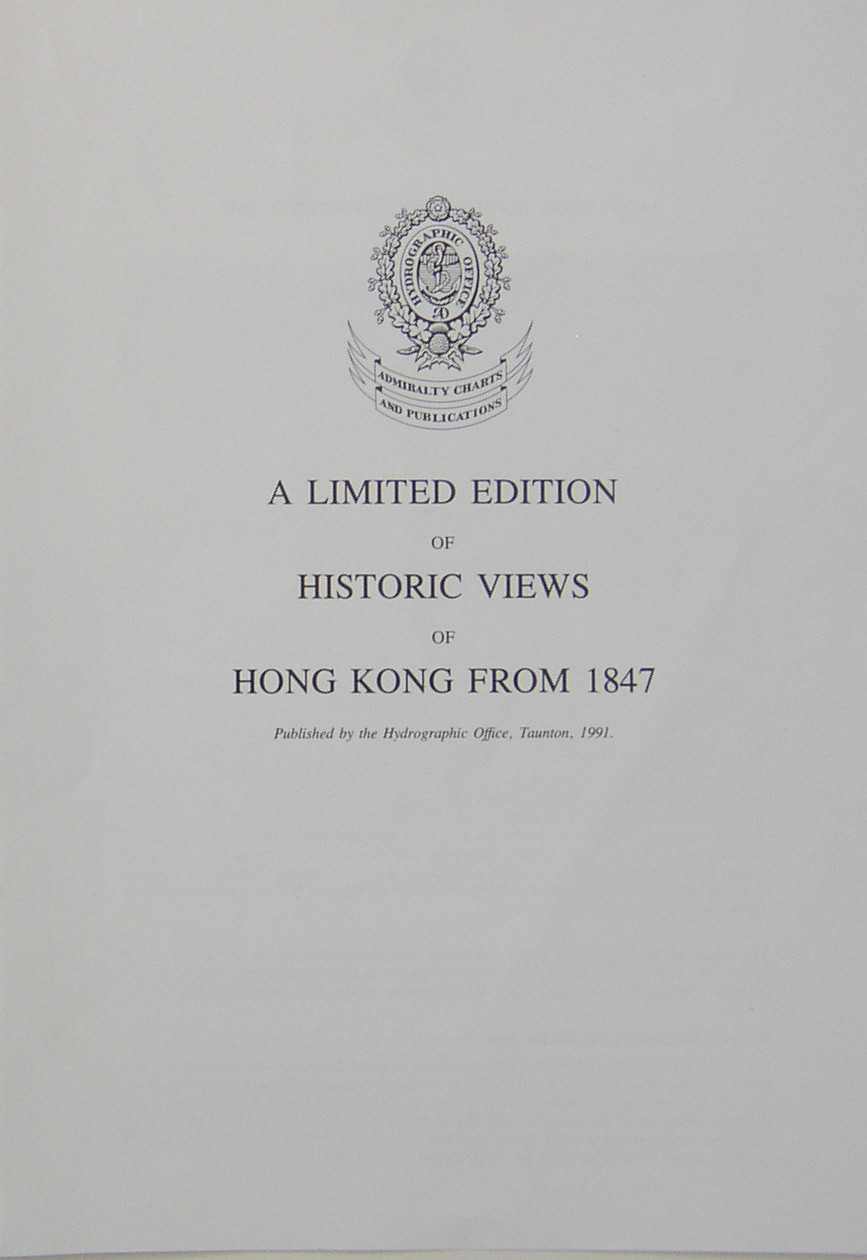 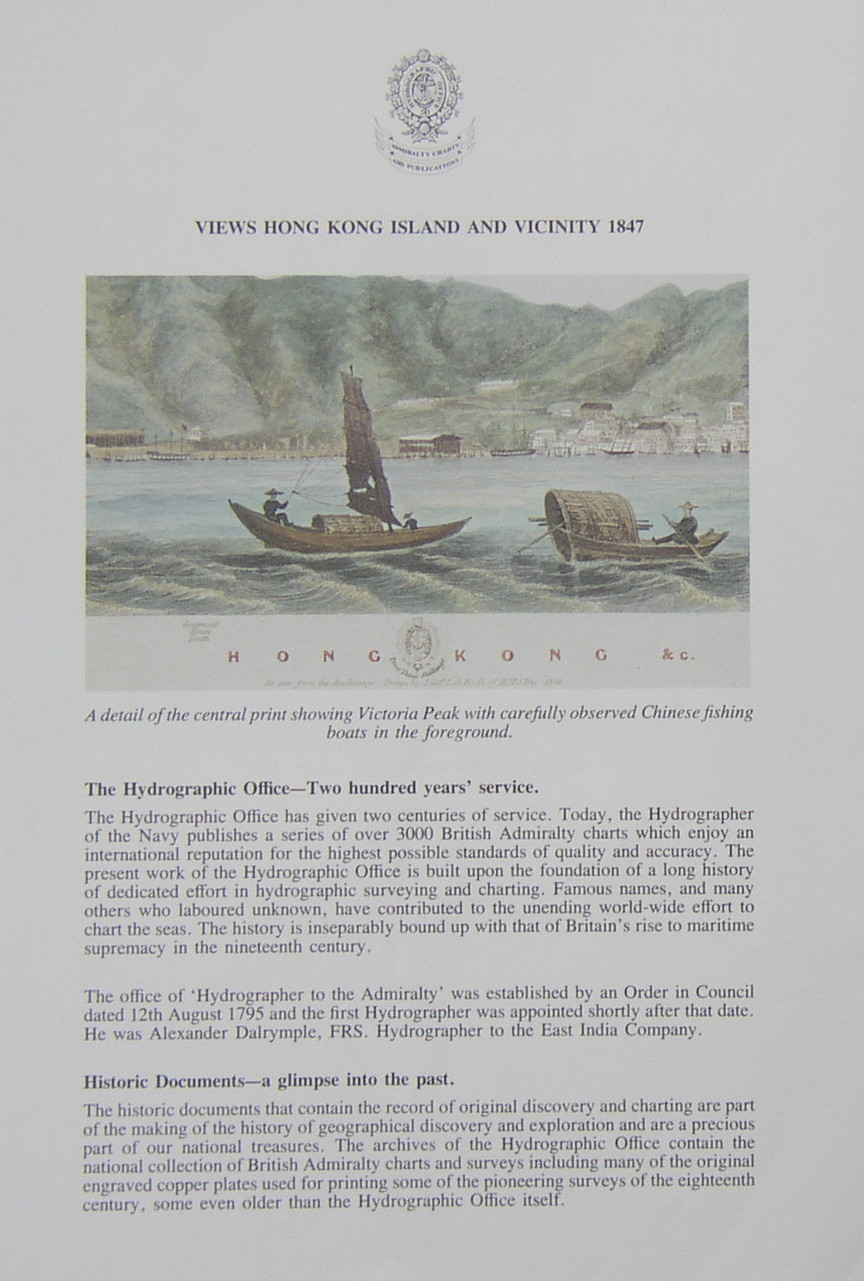 A detail of the central print showing Victoria Park with carefully observed Chinese fishing boats in the foreground.

The Hydrographic Office - Two hundred year's service.
The Hydrographic Office has given two centuries of service.  Today, the Hydrographer of the Navy publishes a series of over 3000 British Admiralty charts which enjoy an international reputation for the highest possible standards of quality and accuracy.  The present work of the Hydrographic Office is built upon the foundation of a long history of dedicated effort in hydrographic surveying and charting .  Famous names, and many others who laboured unknown, have contributed to the unending world-wide effort to chart the seas.  The history is inseparably bound up with that of Britain's rise to maritime supremacy in the nineteenth century.
The office of the 'Hydrographer to the Admiralty' was established by an order in council dated 12th August 1795 and the first Hydrographer was appointed shortly after that date.  He was Alexander Dalrymple, FRS.  Hydrographer to the East India Company.

Historic Documents - a glimpse into the past.
The historic documents that contain the record of original discovery and charting are part of the making of history of geographical discovery and exploration and are a precious part of our national treasures.  The archives of the Hydrographical Office contain the national collection of British Admiralty charts and surveys including many of the original engraved copper plates used for printing some of the pioneering surveys of the eighteenth century, some even older than the Hydrographic Office itself. 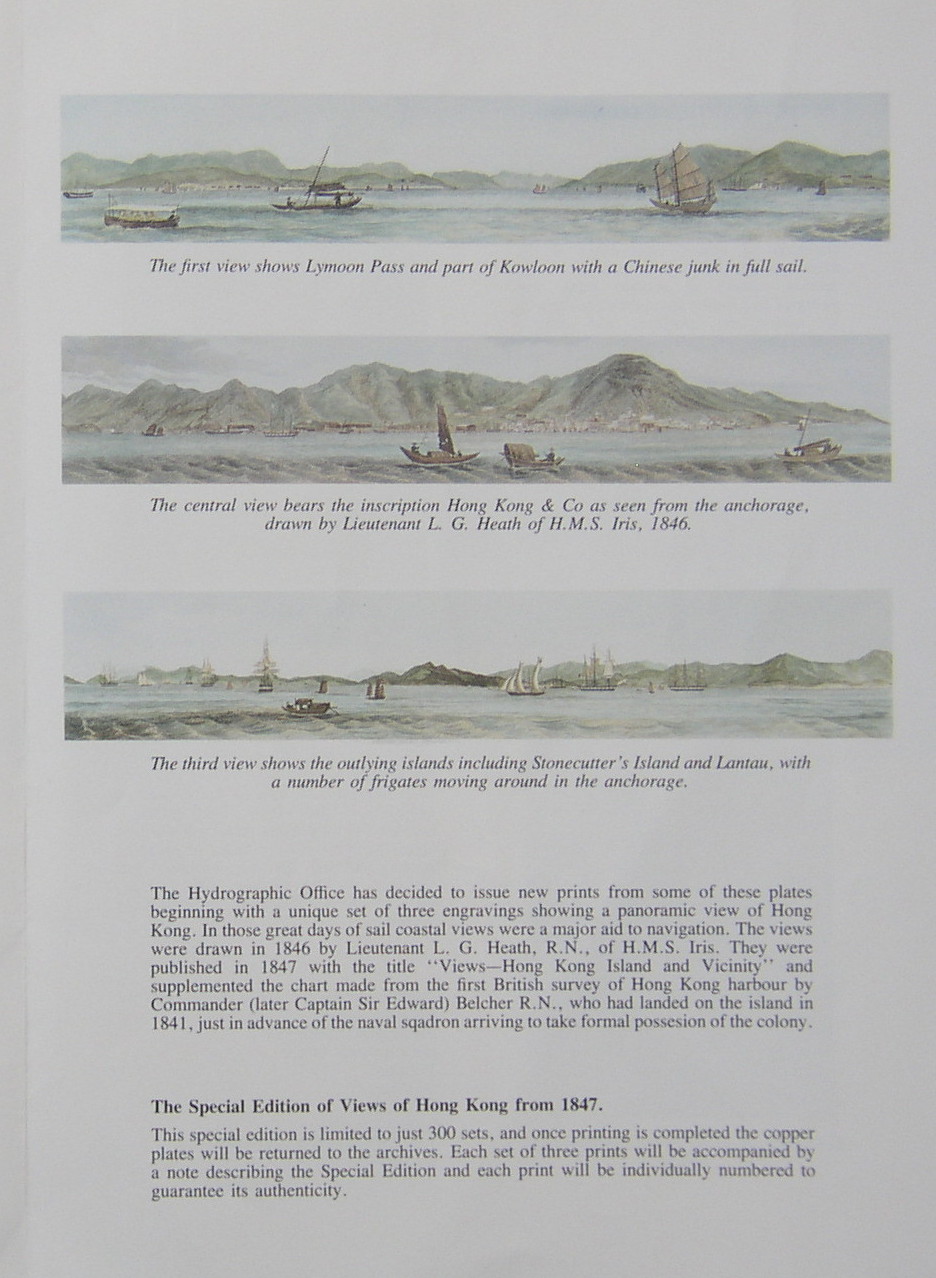 The first view shows Lymoon Pass and part of Kowloon with a Chinese junk in full sail
The central view bears the inscription Hong Kong & Co as seen from the anchorage, drawn by Lieutenant L. G. Heath of H.M.S. Iris , 1846.
The third view shows the outlying islands including Stonecutter's Island and Lantau, with a number of frigates moving around in the anchorage.

The Hydrographic Office has decided to issue new prints from some of these plates beginning with a unique set of three engravings showing a panoramic view of Hong Kong.  In those great days of sail coastal views were major aid to navigation.  The views were drawn in 1846 by Lieutenant L. G. Heath, R.N., of H.M.S. Iris.  They were published in 1847 with the title 'Views - Hong Kong Island and Vicinity' and supplemented the chart made from the first British survey of Hong Kong harbour by Commander (later Captain Sir Edward) Belcher R.N., who had landed on the island in 1841, just in advance of the naval squadron arriving to take formal possession of the colony.

The Special Edition of Views of Hong Kong from 1847.
This special edition is limited to just 300 sets, and once printing is completed the copper plates will be returned to the archives.  Each set of three prints will be accompanied by a note describing the Special Edition and each print will be individually numbered to guarantee its authenticity. 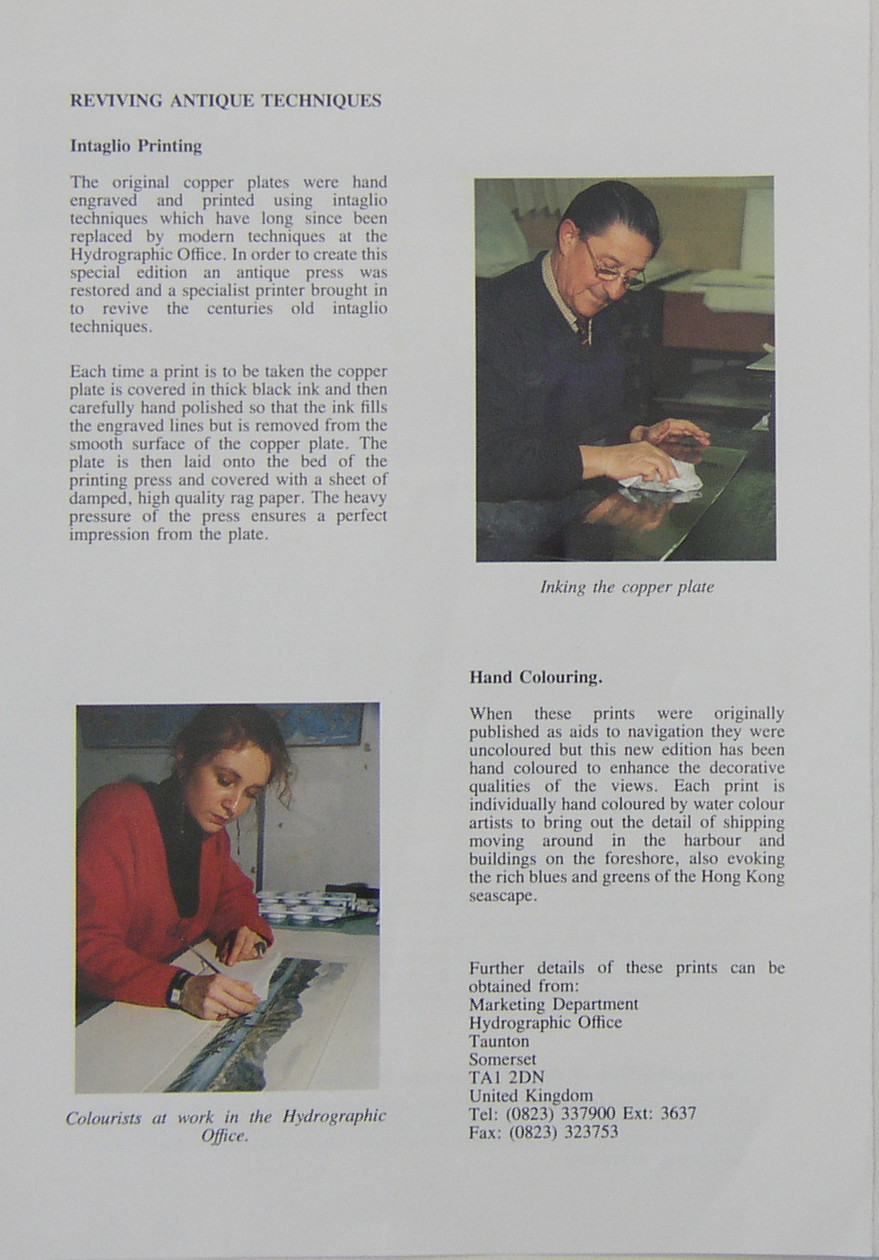 Inking the copper plate
Colourists at work in the Hydrographic Office

Intaglio Printing
The original copper plates were hand engraved and printed using intaglio techniques which have long since been replaced by modern techniques at the Hydrographic Office.  In order to create this special edition an antique press was restored and a specialist printer brought in to revive the centuries old intaglio techniques.
Each time a print is to be taken the copper plate is covered in thick black ink and then carefully hand polished so that the ink fills the engraved lines but is removed from the smooth surface of the copper plate.  The plate is then laid onto the bed of the printing press and covered with a sheet of damped, high quality rag paper.  The heavy pressure of the press ensures a perfect impression from the plate.

Hand Colouring
When these prints were originally published as aids to navigation they were uncoloured but this new edition has been hand coloured to enhance the decorative qualities of the views.  Each print is individually hand coloured by water colour artists to bring out the detail of shipping moving about in the harbour and buildings on the foreshore, also evoking the rich blues and greens of the Hong Kong seascape.

I do have one spare set of these views of Hong Kong from the 1991 edition (complete set of three pictures, coloured).  These are for sale .  For more information please contact me onThis email address is being protected from spambots. You need JavaScript enabled to view it.