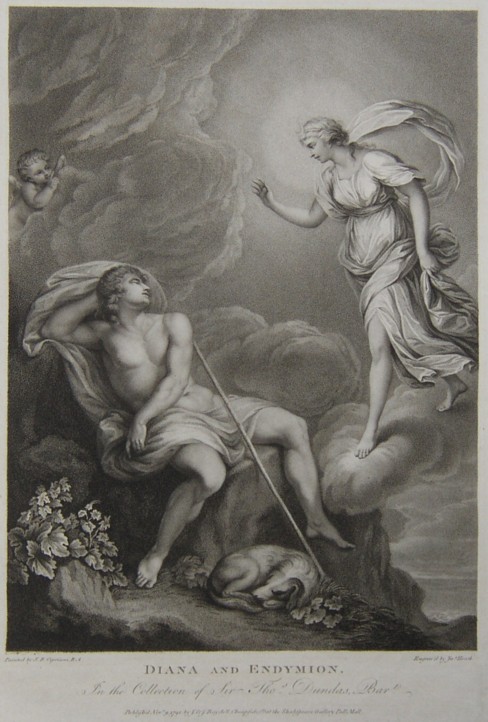 Engraving of Diana and Endymion from the drawing by the artist Giovanni Batista Cipriani R.A.  Engraved by the engraver James Heath ARA.  Published by J & J Boydell in 1792.  The orginal from the collection of Sir Thomas Dundas. 26cm x 37cm.  Boydell recorded the engraving of this print as having been commissioned from James Heath at 30 guineas.  The resulting prints were listed in the Boydell 1802 catalogue at 5 shillings each.

Diana (or in Greek, Artemis) was according to Greek mythology one of the twelve Gods and Goddesses of Olympus.  She was an earth Goddess whose major attribute was chastity.  The Romans worshipped her as a triple deity Luna (the sky), Diana (the earth) and Hecate (the underworld).  Diana is associated with several stories and has often been represented in painting either as a huntress, bathing, accompanied by nymphs or punishing the nymph Callisto for losing her chastity.  Diana visited the young Endymion who was sent to sleep by Jupiter as a return for being granted eternal youth.  Thus Endymion is a symbol of timeless beauty.  Diana's love remained unfulfilled because the Goddess was chaste.