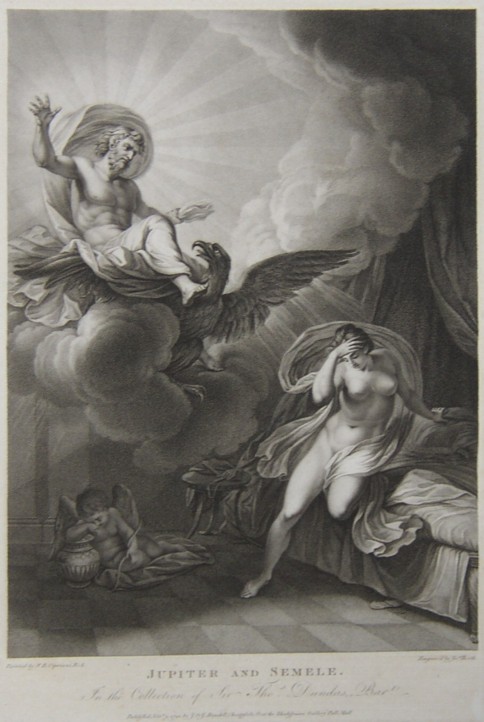 Engraving of Jupiter and Semele from the drawing by the artist Giovanni Batista Cipriani R.A.  Engraved by the engraver James Heath ARA.  Published by J & J Boydell in 1792.  The orginal from the collection of Sir Thomas Dundas. 26cm x 37cm.  Boydell recorded the engraving of this print as having been commissioned from James Heath at 30 guineas.  The resulting prints were listed in the Boydell 1802 catalogue at 5 shillings each.

The subject is taken from Ovid's 'Metamorphosis' (III).  Semele was the daughter of Cadmus, the brother of Europa, and Harmonia, the daughter of Mars and Venus.  When Jupiter and Semele first got to know each other, Jupiter was disguised in simple clothes.  Jupiter's wife, Juno, was angry with both Jupiter and Semele.  Juno disguised herself as Semele's nurse and made Semele curious about her new boyfriend.  The next time Jupiter visited, Semele made him promise that the next time he came, he would come to her as he really was.  On his next visit, he came as the god Jupiter, and Semele was consumed to ashes by his brillance.