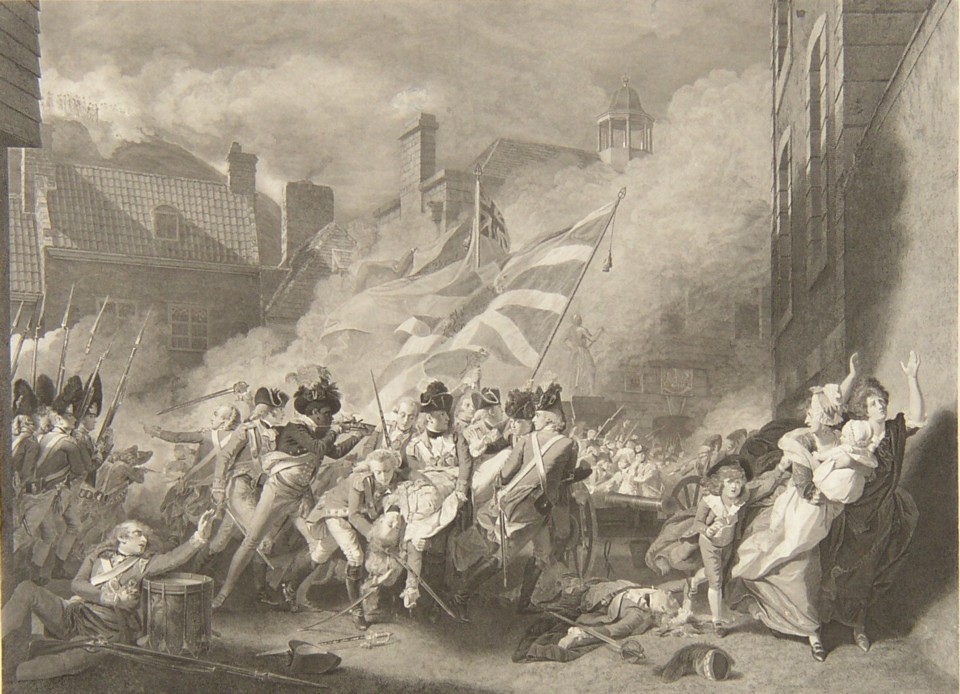 The Death of Major Pierson

On 7th January 1781, a contingent of French soldiers invaded Jersey and were defeated in a brief but bloody battle in the Royal Square (or Le Vier Marchi as it was then known) outside the Royal Court.  The commander of the British forces, Major Pierson was killed in battle, but the French were defeated.  The battle was reported in the London Gazette, where it was read by an Alderman of the City of London, called John Boydell.  John Boydell was a pushy, successful engraver, whose business was at 90 Cheapside in London.  He knew and admired a fashionable American artist John Singleton Copley, who had settled in London and made a considerable reputation for himself painting historic subjects on a grand scale.  Boydell's imagination had been captured by the report of the Battle of Jersey and he influenced Copley to paint it.

Copley's painting entitled "The Death of Major Pierson" was unveiled in London in 1784, but not at The Royal Academy, which caused mutterings amongst the art establishment. The painting was an overnight sensation.

The engraving of the painting was originally commissioned by the Boydells in 1784 and the first proof was dated '1 September 1788'.  The print was exhibited at the Royal Academy in an unfinished state in 1795, and finally published on 5 January 1796 and exhibited at the Shakespeare Gallery.  James Heath received 2000 guineas for the print, which was probably his masterpiece as a 'historical' engraving.  1200 copies were printed before retouching; the price to original subscribers was 3 guineas, and in Boydell's catalogue of 1807, it was prices at 4 guineas.

If you have more information to add to the above, please email This email address is being protected from spambots. You need JavaScript enabled to view it.