Although many articles and books have been written about the various aspects of this subject, including Karl Schimmer's Porte de Mar and John Heath's The British Postal Agencies in Mexico City, Vera Cruz and Tampico 1825-1876, this is the first comprehensive treatment of the whole subject.  Starting with the Spanish Colonial period, the book explores t he development and intricacies of Mexican maritime mail through independence up to the early twentieth century.  Some of the major areas dealt with are the British and French mail services to Mexico, maritime mail services between Mexico and the USA, the Wells Fargo Agencies in Mexico, the 'Porte de Mar' system, and the effects of Mexico's joining the UPU.  Copiously illustrated, with more than 300 illustrations of covers and postmarks as well as 8 colour plates, this book is indispensible to all those with an interest in Mexican and transatlantic postal history.

2.Ship Letter Postage Rates of the United States of America. 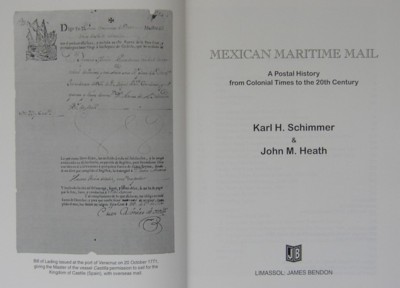