The 1868 issue of Mexico has increasingly interested and fascinated philatelists, especially since the discovery of the official postal records in the 1980s.  It was launched in haste, against a background of political struggle following the foreign intervention which led to the almost total collapse of the Mexican economy.  Improvisation was the hallmark of this issue, so that, try as the postal authorities might, errors, varieties and rarities abound.

In 1935, Paul de Smeth, the Belgian collector, and the French Marquis de Fayolle, with the help of the distinguished British philatelists, Samuel Chapman and Leonard Josling, made the first effort to encapsulate the issue as part of their well known 'Les Premies Émissions du Mexique'.  This is reproduced here in English translation for the first time as an Annex.  Since then, and in particular in the last 25 years, many valuable studies have been published both in English and Spanish, which require to be brought together.

While the present handbook contains a great deal of original material, its principle aim is thus to serve as a more or less definitive and up to date synopsis in a structured and easily comprehensible form so as to include recent researches into this extraordinary issue, by way of a general guide for collectors as well as specialists.

The major subject areas dealt with in the handbook include the whole range of the stamps issued to the 40 original postal districts, together with their overprints; postmarks and their varieties, including 'Sello Negro' cancels; maritime mail usage; the lithographic stones used and their engraving techniques; the 'thin figures' and their retouches; the 'thick figures' and their types and retouches; and errors and varieties especially on the overprints, including color variations; and 'Splits' known.  There is also detail on proofs, essays and color trials; paper and perforation varieties; reprints and forgeries; and a final chapter on rarity value ratings.

Three of the Annexes cover the 'Type of Mexico' (Tipos), the Anotados and the 'Habilitados', all of which were involved in the sensational so-called 'Great Postal Fraud' of 1870-72.  The final Annexes include in full the officially invoiced and dated returns (in translation), together with known usages of the stamps by their cancels and location.

The copious illustrations include eight plates in color.  There is also an extensive bibliography relating to the issue.

Of the Authors: John Heath (1922-2009) was a British diplomat, a Fellow of the Royal Philatelic Society London, and co-author of 'Mexican Maritime Mail' which was awarded five international gold medals between 1998 and 2001.  Douglas Stout, who runs his own highly sophisticated computer-allied software company in Ventura, California, has been the holder of several senior offices in the Mexico Elmhurst Philatelic Society International (MEPSI).  Both long standing collectors of the 1868 issue. 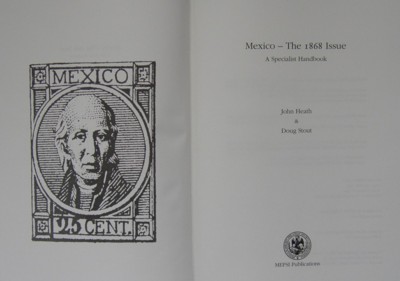