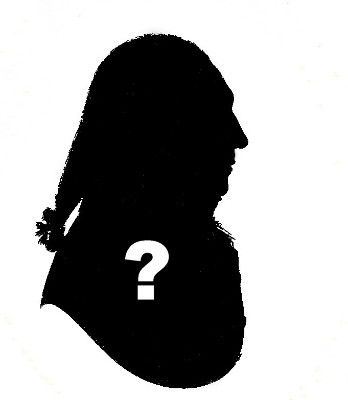 We know that Joseph Heath referred to himself as a writing master in 1724 and that he was married to Hannah.  He obtained his freedom as a bookseller in 1743.  In 1744 he apprenticed his son Joseph as a bookseller.  There is a note regarding a book being printed by Joseph Heath in 1744 (senior or junior?).  He published in manuscript form a Dictionary of Semography in 1747, now preserved in Nottingham library.  It should be noted that Thomas Heath also published on 'the art of short writing' in 1644.

On the 1754 list of voters for Nottingham he is recorded as a bookseller in the Market-place, Long Row in Nottingham and his son Joseph (junior) is also listed as a book seller but in Timber Hill (which became South Parade around 1850).  There is a record of a Joseph Heath from Abchurch Lane buried at Bunhill Fields nonconformist burial ground, London, 1 January 1757.

Some of the Heaths (presumably son's of Joseph Heath) are also mentioned a number of years later in 1774 on a list of voters.  This reads as follows:

AN EXACT LIST OF THE Burgessess and Freeholders,
Of the Town and Country of the Town of NOTTINGHAM;
Who POLLED before RALPH NEWMAN, AND Wm HEATH, jun. GENT. SHERIFFS.
At the ELECTION of TWO BURGESSES, To serve in PARLIAMENT for the said Town.
Taken on Tuesday, Wednesday, Thursday, and Friday, the 11th, 12th, 13th, and 14th of OCTOBER 1774.
At the BOOTH erected in the Market Place for that Purpose, by Adjournement from a Room in the Change.
CANDIDATES.
The Hon. WILLIAM HOWE, of EPPERSTONE;
The Right Hon. EDWARD BENTINCK, Esq; commonly called Lord Edward Bentinck; and
Sir Charles Sedley, of Nutthall, Bart.
NOTTINGHAM
Printed by GEORGE BURBAGE, for S. CRESWELL, and G. BURBAGE; also sold by Mr WARD, and Mr HEATH, booksellers in Nottingham. 1774.

The note then goes on to list all the Burgesses and Freeholders and in each case how many votes they gave to each of the candidates.
This included the following persons with the name Heath:

The following people with the name Heath are recorded as holding the office of Sherrif of Nottingham.

The Spiritual Gamut: Or, Rudiments of True Music. Being a Faithful Relation how William East, . .... who was a Man Well-skilled in the Music of this World: Learned Also to Sing the Song of Moses, ... Taken from His Own Mouth. . ... To which are Added, Two Poems, One on His Conversion, the Other Publisher:  M. Lewis; also sold by M. East and Mr. Streeton, at Grantham; Mr. Heath, at Nottingham; and Mr. Gregory, at Leicester, 1759.

Barber’s Psalm-Book.  Containing variety of Psalm-Tunes, both for the common and particular measures, with Chanting-Tunes, &c.   And twenty-three Anthems, many of them never published before.  The Third Edition, with large Additions.
Printed for and sold by C Bathurst, in Fleet Street, London.  J. Heath, senior on the Long-Row:  J. Heath junior in the Market-place;  G. Ayscough, in Bridlesmithgate;  T. Peat, Schoolmaster, in Castlegate, Nottingham.   J. Roe,  at Derby.  By the Author, at Castleton in Derbyshire; and all the Booksellers in Town and Country.
This was referenced in an advert in the 1754 ‘Gentleman’s Diary or the Mathematical Repository Almanack’.

A Sermon Preached, On Occasion of the Fast, April 11, 1744; At Castlegate, Nottingham: From Matt viii. 25. And his Disciples came to him, and awoke him, saying, Lord, save us; we perish.  By James Sloss M.A.  Published at the Desire of the Congregation.  London; Printed by H Woodfall, without Temple-Bar; For John Osward, at the Rose and Crown; and Joseph Davidson, at the Angel, both in the Poultry; and Joseph Heath, Bookseller, in Nottingham.  1744. (Price Six-pence.) [oct. pp. 39.].

David's Harp well Tuned; Or a Book of Psalmody. Containing Variety of Psalm-Tunes, Both for the Common and Particular Measures; With Chanting-Tunes For Te Deum, Jubilate Deo, Magnificant, Nunc Dimittis; likewise the Order of performing Divine Service by Way of Chanting, after Cathedral Manner, suitable for our Country Churches: With a great Number of Psalms, Hymns, and Twenty-three Anthems, many of them never before published.  The Third Edition, with Additions; the former carefully Corrected and Amended.  By Robert Barber, Castleton. London: Printed by Robert Brown, in Windmill-Court, near Christ's Hospital.  For Charles Bathurst, in Feet-Street; Joseph Heath, at Nottingham and Mansfield; and John Roe, at Derby.  1753. (octavo; the Introduction, 4 pp; +235pp; + A Table 1 page).

The Dying Christians Triumph In a Living Redeemer Exemplified in a Sermon, Preached at Sutton in Ashfield, Nottinghamshire, occasioned by the Death of Matthew Butcher jun. who Departed this life December 10, 1777, aged 22 years.  By John Barrett.  Printed by A Bell, No 8, Aldgate, London; and sold by Joseph Heath, Bookseller, Nottingham and Mansfield.  (oct, 48 pages).

List of the Burgesses and Freeholders of the town and County of the Town of Nottingham.  1774.  Printed for George Burbage, for S. Cresswell, and G. Burbage; also sold by Mr Ward, and Mr Heath, Booksellers in Nottingham. 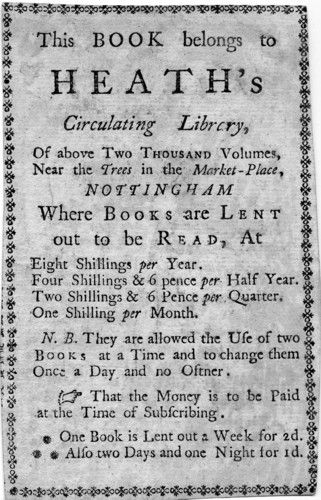 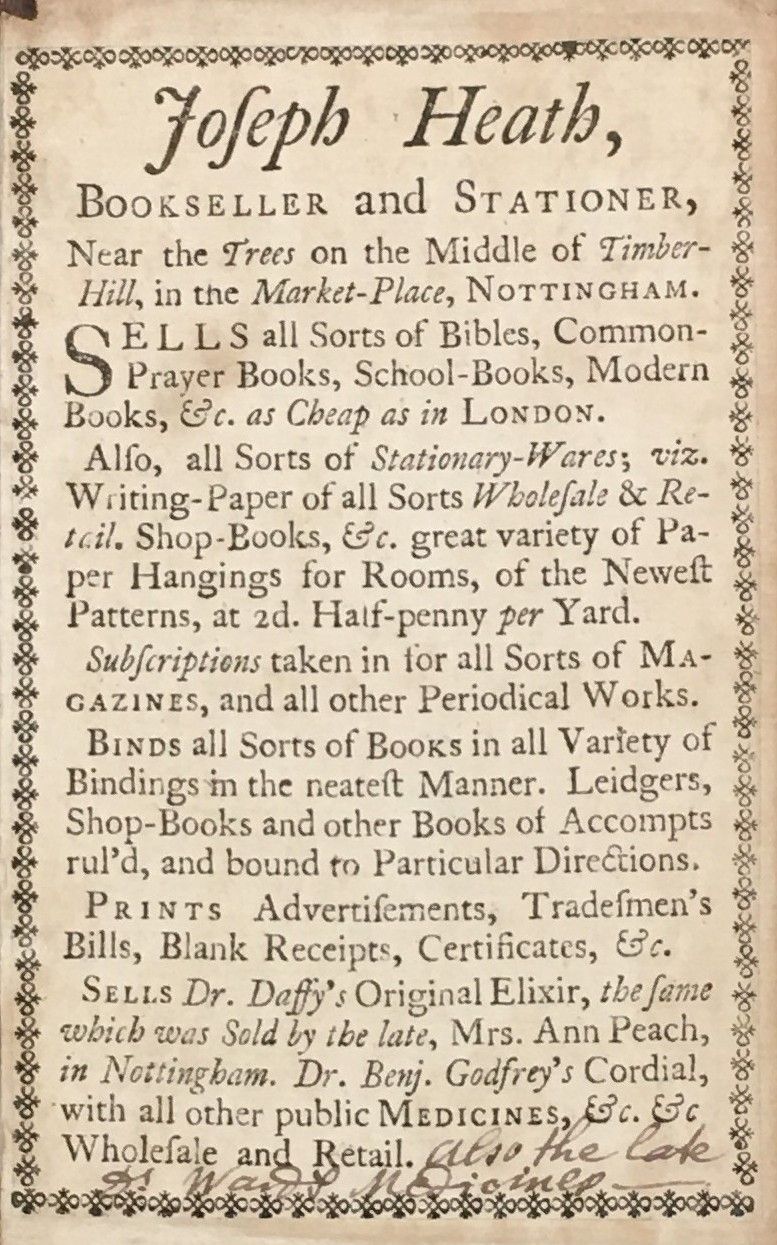