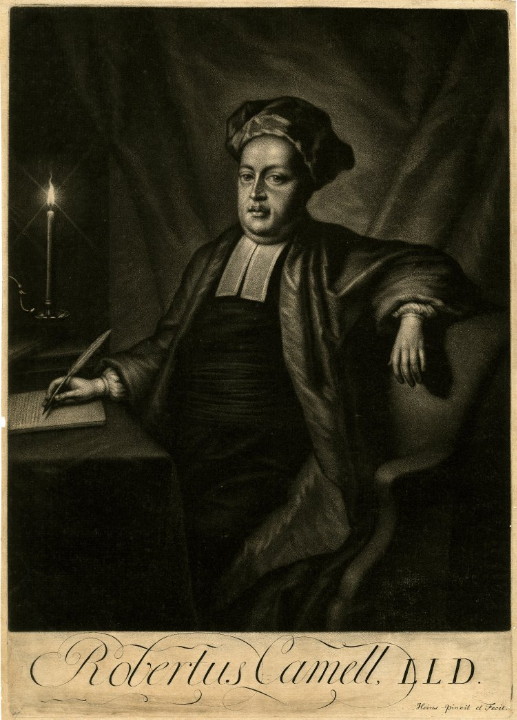 Robert is noted in the book 'The History and Antiquities of the County of Suffolk' by Alfred Suckling, 1846, Vol 1,  page 327.  This reads as follows:

Robert Camell, LLD, rector of this paris, and of Lound, was of Scottish descent.  His great grandfather, Robert Camell, being about 14 years of age, came out of Scotland in the time of the war between that nation and England, and settled at Gislingham, in Suffolk, in 1583.  He died April 12th, 1587, leaving Robert his eldest son, who died anno 1667.  William Camell, of Diss, was his third son, who left Robert, his eldest son, who left three sons.  The eldest was of Sidney College, in Cambridge, LLD, Rector of Bradwell and Lound.  He died on Wednesday November 21st, 1733, at Norwich, where he had been elected Lecturer of St Peter's Mancroft, December 22nd 1731; and was buried there.  He published serveral ingenious tracts, without his name, and three sermons preached at Yarmouth, with it affixed thereto.  Bomefield, the historian of Norfolk, acknowledged himself greatly assisted by Dr Camell, in his topographical essay.  His arms were, gyronny of eight, or and sable, a crescent argent.

If you have any further information about Robert Camell I would be very pleased to hear from you.  Please contact me on This email address is being protected from spambots. You need JavaScript enabled to view it.