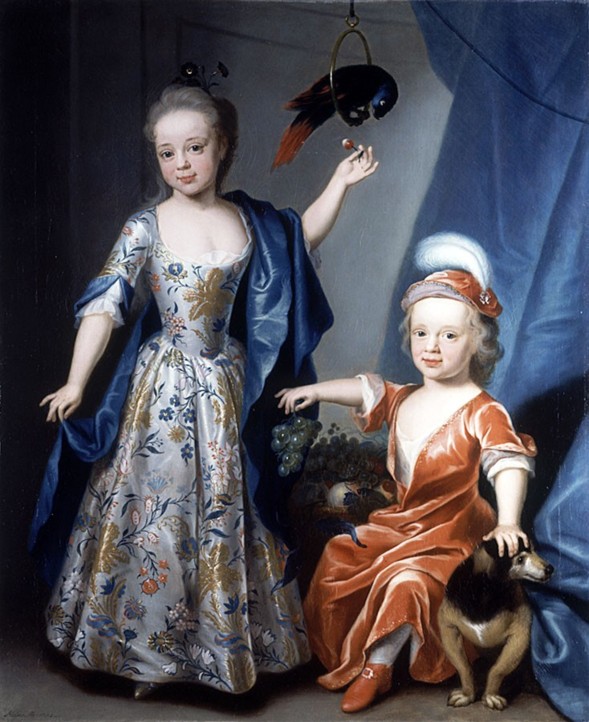 Portrait of Edward and Blanche Astley

The note from Sotheby's reads:
Both full length, he seated wearing red, grapes in his right hand, she standing wearing a white satin dress with gold brocade and a blue cloak, and feeding a parrot.  Oil on canas in a carved wood frame.  The sitters were children of Sir Jacob Astley, 3rd Bt. of Melton Constable, and his wife Lucy, daughter of Sir Nicholas Le Strange, 4th Bt. of Hunstanton.  Edward succeeded to the baronetcy on the death of his father in 1760.  He married three times - firstly in 1751 Rhoda, daughter of Francis Delavel of Seaton Delavel, Northumberland (who died in 1757), secondly, in 1759, Anne, daughter of Christopher Milles of Nackington, Kent (who died 1792), and thirdly in 1793, Elizabeth Bullen.  He was MP for Norfolk for twenty-four years.  His sister Blanche married Edward Pratt of Ryston.  The provenance is recorded as by descent in the Le Strange family at Hunstanton Hall. Signed lower left 'Heins. Fec: 1732'.  129.5cm x 105cm.  Norfolk Portraits page 325 no 49.  Sotheby's 18 Nov 1987, Lot 37.

Now at Seaton Delaval Hall in the collection of the National Trust.