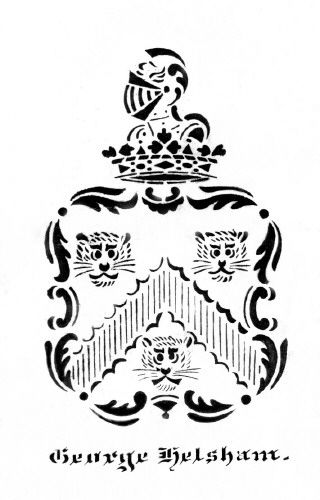 The information I have about George Helsham comes mainly from the diary of his sister Elizabeth Jones (nee Helsham).  Some extracts are as follows:

. . . In 1823 my brothers left school and were together at Fincham and, as ever, happy in each other's society and in the simple pleasures afforded by their pony, favourite dog and gun, not the sportsman's gun, that would have been far too expensive an amusement for my dear ones, but in the pursuit of jays that never would be shot.

. . . In March Mr. Forby took dear George to London and, after putting him in communication with our various friends there, left him with Mr. Rowe, a medical man in Burton Crescent and the prospect of passing four years there. By early rising he obtained the refreshment of a walk out of town, which was then possible, as well as time to read the Bible and devotional books, and this, I have every reason to believe, became his settled habit for the remaining thirteen years of his life. This was an eventful year in our little circle of friends. Mrs. Barnard received tidings of the death of her son John in India and on the 8th of September our dear gentle Aunt Forby had an attack of paralysis which entirely deprived her of the use of one side and left her accustomed chair vacant. Her two daughters, Mrs. Miller and Miss Forby were her day nurses and her faithful servants shared the night watching. I was at a distance making various visits which enabled me to see my dear George [Helsham] who had no holidays in Norfolk this year. He was with me at Hartley and greatly enjoyed that visit, and we also met at Alexander's and Frank Ricardo's.

. . . Poor Anne Bolton's ague returning, we went to Cromer where dear George was with us, but the sea air had no effect and so we travelled by easy journeys in a hired carriage, in the first week of November, to Hastings. There we passed the winter. In the spring Mr. and Mrs. Bolton and their two children came and took lodgings near us and when it became too hot on the beach we removed to a lodging on the East Cliff. Thence our dear invalid went home and George [Helsham] and I came into Suffolk. We had not been many days at Barking when we received a letter from Mr. Kirby stating that Mr. Harsant, who had given up practice and retired to his ?turning? room had lost his only son of fever and a substitute must immediately be found. My brother wrote to William Muriel, "You want to marry, I can wait. Make what use you please of the enclosed letter." And we know the result. Shortly afterwards when we were staying at Hemingstone, we received information that Mr. Lynn's assistant having gone into practice in opposition to him married Miss Clarkson whose family carried considerable interest, Mr. Lynn himself was seeking a new partner. Of this transaction I need not speak and it is better not to do so of things and persons in Woodbridge. Dear George entered eagerly into it. The income of the practice being represented as a very handsome one, I could not remain here but returned to Burnham. It was a terrible winter and I had to make more than one effort before I accomplished my journey to Woodbridge. We were in Gall's lodgings whilst I purchased furniture. The alterations were so recent that the house was not dry but the inconvenience of daily walks through heavy snow drove me into it.

It would appear that George took up a partnership in a medical practice with Mr Lynn, in Woodbridge, probably around 1829.  We can assume that George's sister Elizabeth joined him a short while later and it was probably in Woodbridge that she met her future husband Richard Jones (also a doctor), to whom she became married in August 1837, a year after George had died.