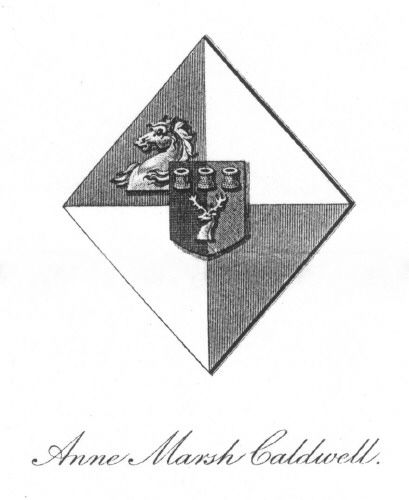 This coat of arms contains the three cold wells and stag head from her father James Caldwell and the horse head from her late husband Arthur Cuthbert Marsh.  This bookplate would date from 1860 when she changed her name from Marsh to Marsh Caldwell.

This bookplate is known to exist in a number of books including:
Hudibras by Samuel Butler, 1710.
The Country Housewife's Family Companion by Ellis 1750.
Flora Londinensis by William Curtis, B. White and Son, London, 1777.
An essay on epic poetry by William Hayley, 1782
A New Complete and Universal Body Or of Natural History by George Henry Miller, 1785.
Letters, Revolution in France by Henry Frederic Groenvelt, 1792.
A Systematic Arrangement of British Plants by Withering, 1801
Classical Dictionary by J Lempriere, 1804.
Tennyson Poems by Alfred Tennyson, 1842.
Leaves from my Journal by Robert Grosvernor, 1852.
Song of Roland by Anne Marsh Caldwell, 1854.

Many books with this bookplate ended up in the Linley Wood library after Anne Marsh Caldwell took possession of the property after the death of her brother James Stamford Caldwell in 1858.  After her death in 1874 Linley Wood was occupied by her daughters the Miss Marsh Caldwells.  Maj Gen Frederick Crofton Heath-Caldwell took possession in 1913 and at that time some of the Linley Wood library books were distributed among family members.  The rest were dispersed in 1949 when Capt CH Heath-Caldwell sold the Linley Wood estate.  The more valuable books were sent for auction at Sothebys however the majority were sold at the auction of the contents of the house which was held at Linley Wood.

I have over the years been able to buy back a number of these books which have come up for sale on the internet.  If you have any books with this bookplate I would be very pleased to hear from you.