of Portsmouth and Titchfield, Hampshire 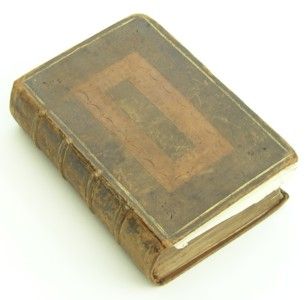 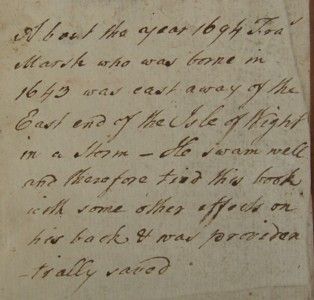 Francis Marsh, of Titchfield, Hampshire, Portuguese Merchant, apparently only son of Francis Marsh MA by his second wife Elizabeth.  Born in Kent October 1643.  He traded to Lisbon in his own ship, and being wrecked off the Isle of Wight, settled at Tichfield.  He married Hannah (recorded in Miss Marsh-Caldwell's family prayer book) and had issue:
1. George Marsh RN (1683-17??).
2. Margaret.
3. Mary.
4. Hannah.
5. Daniel (1684-?) said to be grandfather to Dr Herbert Marsh, Bishop of Peterborough, but impossible.

The following account of Francis Marsh's life is recorded in the diary of his grandson George Marsh (1722-1800) and reads as follows:

My father was the son of him who settled at Titchfield, who became Captain and owner of a small ship and trading from Southampton to Lisbon in which he had been so successful that he had intended to settle on shore upon his fortune, but in coming home on his last voyage [around 1694] his ship was -ed in a violent storm up the Channel to the east end to the Isle of Wight, and there foundered and every person in her was drowned but himself. He was said to be an excellent swimmer, but in such a sea he had not the least hopes of saving his life. He had prepared and always carried with him to sea an oil skin bag in the . . . The shape of a hammock in which he proposed to put his valuable papers and lash around him and over his arms in case he should be forced by any accident at sea, to throw himself therein, with the hope of saving his life and thereby swimming. In going this last voyage he was earnestly entreated by a gentleman and his son who was a near neighbour, to take the latter with him for pleasure who was a most amiable boy of fourteen years of age, who was very much admired by him and everyone else who knew him.  He therefore consented to take him and when he found there was no hopes of saving either of their lives or the ship he was quite miserable with regard to this fine boy who upon finding the danger they were in, clung to him as he was undressing himself and securing the aforementioned oil skin bag around him in such a manner as affected him beyond expression more especially as it was totally out of his power to assist or save him from drowning; and when he found the ship was sinking very fast and the seamen run up the rigging to keep as long as they could from the dreadful prospect before them, he was forced to shove the child from him, and commit himself to the sea, from which time he saw no more of the ship or the crew as she soon after sank and every person in her was drowned.  He had put into the oil skin bag his bank notes and his valuable papers, together with a small family bible, not above 7 inches long, 4 or 5 inches broad and about 1 inch and a half thick which is remarkable for containing the Old and New Testament, the reading and singing Psalms, the latter set to music, the Apochryphy and every chapter in the Old Testament explained by question and answer, which remained in the bag when he was miraculously ----d on shore on the beach at the East end the said island, but was then totally senseless and void of the strength insomuch that as the waves drove him up the beach, he rolled back with them, but in a short time after a man at work in a field at a considerable distance discovered something washing up and down the beach with the surf of the sea which appeared very large and very uncommon, who thereupon went to see what it was, and on discovering a man he thought not dead tho' senseless, he run up to the nearest house got a short ladder and help and carried him to it, whereafter the water was pretty well got out of his body, he by medical assistance came to his senses in about two hours, told the particulars of his misfortune, but could give no account of his wonderful preservation, and asked if the bag was found lashed round him, and if his books and papers were safe, observing if a man could be found on the island who could preserve the book he should not regard any expense; fortunately such a one could be found upon a visit from London to some of his friends who very judiciously did so, which is now in my library.  After this event he lived many years in peace and happiness reflecting on the goodness of God to him for his wonderful deliverance and escape from drowning, for which he daily returned thanks to the day of his death.

In the name of Good Amen this thirty first day of May Anno Dom 1714 . . . twelfth year of the reign of Queen Anne over Greater Britain er I Francis Marsh of Portsmouth in the County of Southton Mariner being at present in health of body sound mind & disposing memory but being . . . and ralling to mind his frailty and uncertainty of this life do make & declare these . . . to contain my last will & testament in manner and form following that is to say Imprimus and principally I give & assign my soul unto the hands of Almighty God my Creator hoping for the pardon & remission of all my sins by this alone merits & moderation of Jesus Christ my Blessed Saviour My Body I Give to this Earth from where it was labour and my worldly Effects in manner following that is to Say I Give devise and bequeath unto my Loving Wife Hannah All that my Copyhold Messuage or Tenement and afford all that my Messuage or Tenement & premises wherein I now live on at  . . . of . . . [Point of Portsea?] aforesaid with all & Singular my Goods Chattels & personall Effects whatsoever and whereforever To have and to hold these Two Tenements expenses and personal effects unto my said Wife Hannah for & during the term of her natural life and from after her death & thereafter I give devise & bequeath those Tenements premises wherein I live in Portsmouth and my said personal Estate that will be then remaining unto my sonn George Marsh and Daughters Mary Collins & Hannah Marsh them heirs . . . assign for ever Tenants in Common & not as Joint Tenants.  But my will is that in . . . my said Son & Daughter Marsh after my said wives decease shall Voluntarily Consent to resign up this said Copyhold Tenement expenses to be divided between themselves & my three children above named that then I will & desire that my said other Tenement and personal estate shall go to & be enjoyed between them my said three children above named George Mary Hannah . . . Death their heirs . . . & assign as Tenants in Common, but not otherwise & I do hereby make & appoint my Wife Hannah Executor of this my will and do hereby revoke all those former wills by me made . Witness my hand . . .
Signed Sealed Published & declared by . . .
Francis Marsh to be his last will & testament                   Francis Marsh
In presence of us
John Franklin, Thomas Whitehorne, Joseph . . . [Browno, Brososso?]

There is an earlier will in the Hampshire Record Office (1677A/059) of a George Marsh, also of Titchfield, who wrote a will in 1677.  This George Marsh was perhaps an uncle or some relation as he names Francis Marsh Mariner of Portsmouth and leaves him twenty pounds.  Francis does not seem to be his son as he names as his son as Henry Marsh and leaves most of his estate to this named son (probably over eight hundred pounds).

If you have any more information please contact me.