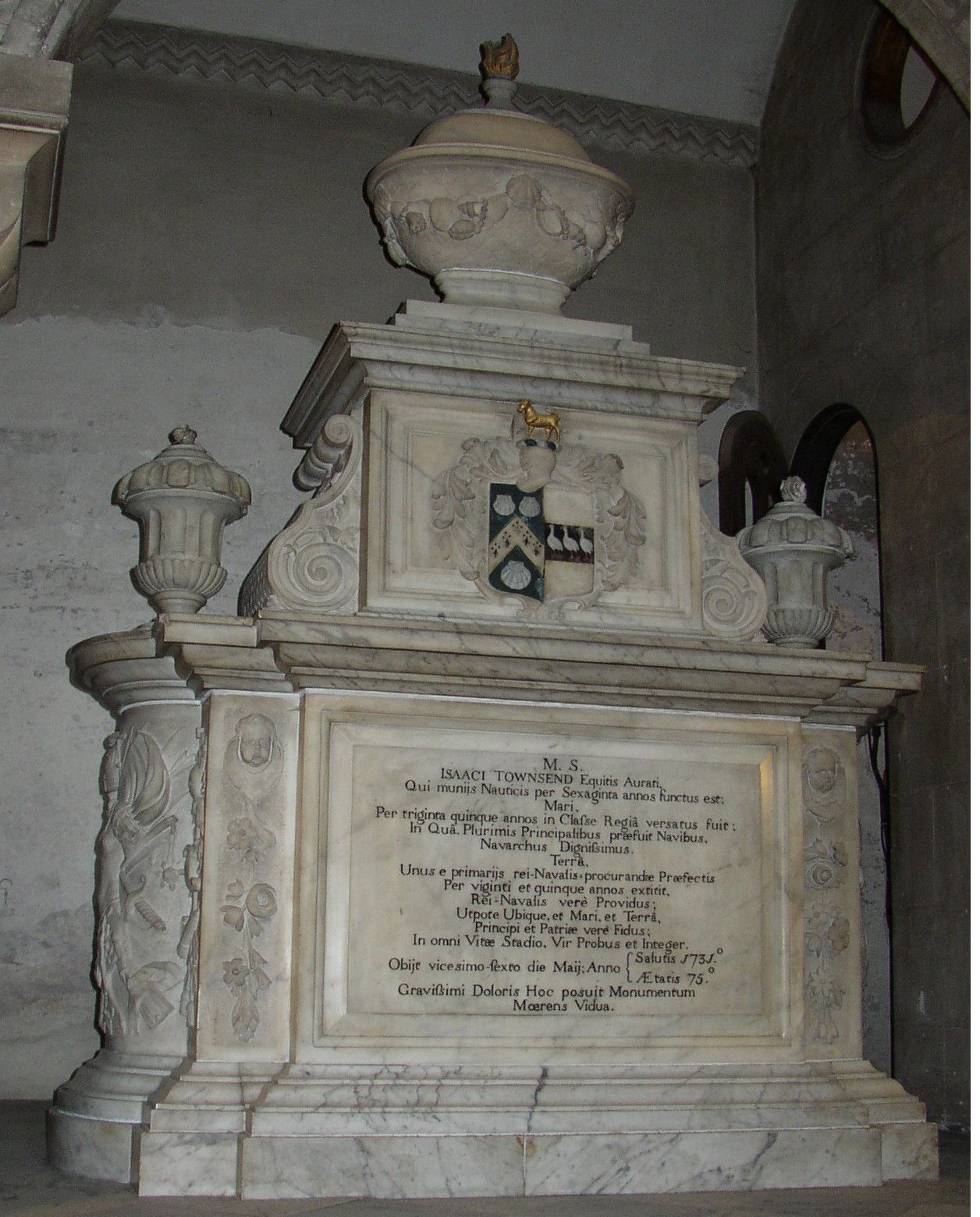 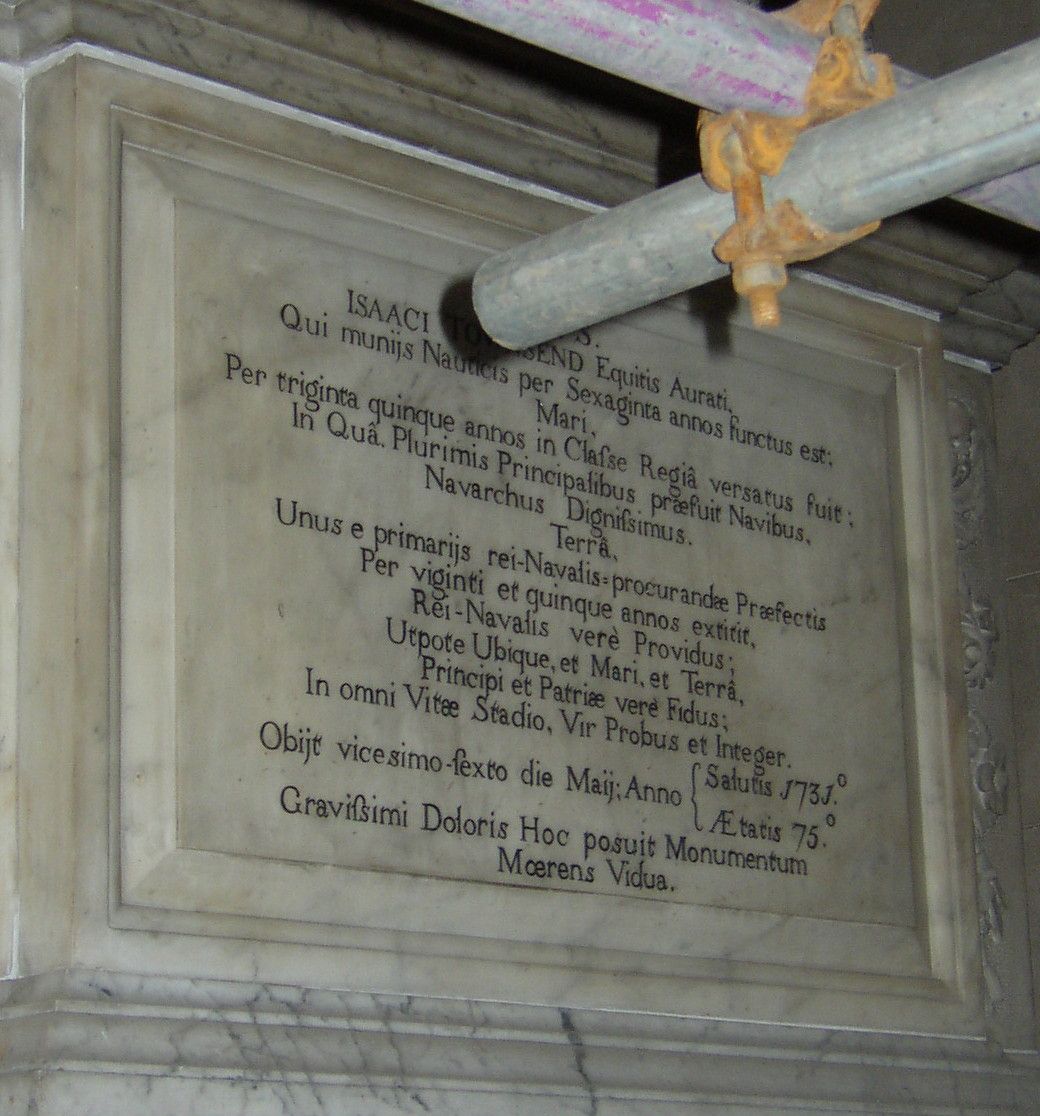 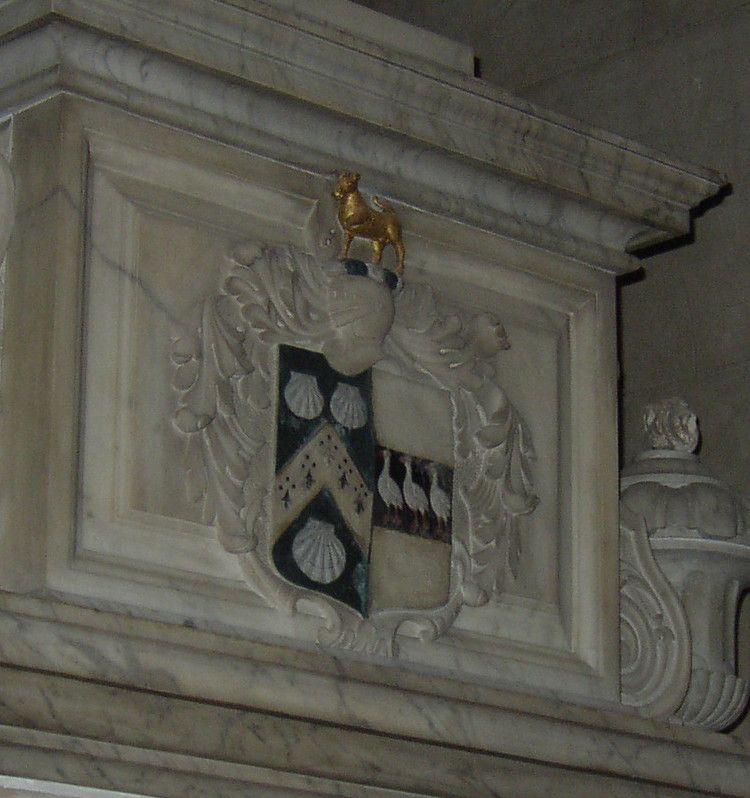 Translation:
Sacred to the memory of Sir Isaac Townsend, who was employed in naval duties for 60 years.   At sea, he spent 35 years in the Royal Navy, in which he commanded many principal ships of the line, a most distinguished commander.  On land, he was one of the leading officers in naval procurement for 25 years.  [He had] real foresight in naval matters.  At all times and in all places at sea and on land he was truly loyal to his sovereign and country.  In every aspect of life [he was] an upright and honest man.  He died on the 26th day of May, in the year of salvation 1731, aged 75.  His grieving widow placed this memorial of her very deep grief.

Her memorial on the back reads as follows:
Here lies Dame Elizabeth Townsend, who was the beloved wife of Sir Isaac Townsend, four and forty years, and almost four his widow.  She was a most affectionate wife of uncommon piety, prudence and economy.  She was hospitable to strangers and friends, and in truth was mistress of many other virtues.  But in no time of her life did she appear more glorious than in her last moments, when she perceived the approaches of inevitable death with invincible courage, and overcame its finishing stroke with a well grounded and truly Christian assurance of a blessed immortality.  She died on the twenty fifth of March 1735.

It should be noted that there is another Sir Isaac Townsend who was also in the navy and so pops up in historic records.  He is a nephew and started his naval career working for Sir Isaac.  This is Adm Sir Isaac Townsend (1685c-1765), who married Elizabeth, daughter of William Larcum, surgeon of Richmond.  This younger Sir Isaac had a very adventurous naval career and was later MP for Portsmouth (1744-1754) and Governor of Greenwich Hospital (1754-1765).  In 1757 he became Admiral of the White and he was later senior Admiral on the list.  His portrait is in the Greenwich Maritime Museum.  He is remembered for holding Admiral John Byng under arrest, prior to his court-martial and subsequent execution at Portsmouth in 1757.

There was also another person in the Navy with a similar family name; George Townshend (1715-1769).