James Gilchrist was commissioned as a Lieutenant, 28th August 1741.   He served on the Namur under Edward Boscawen in 1749.  He was appointed a Commander, 16th January 1750.  On 18th July 1755 he was made Captain of the ship Experiment.  He was present at Minorca in 1756 on the ship Experiment and afterwards he testified against Admiral Byng.  He was later on the ships Deptford and Southampton.  On 24 October 1757 he appointed George Marsh as agent to handle the sale of his prize ships L'Emerode and St.Denis.  On 28 March 1759 he was severly wounded in the left shoulder during the capture of the Danae (or Melampe?) in the North Sea.  He appointed George Marsh to handle the sale of his prize ship Danae, 3 April 1759.  He died in 1777 in Hunsfield, Lanarkshire.

James married Ann Robertson (Roberton?), (daughter of Major John Robertson 16th Laird of Earnock ) probably around 1750 and they had two daughters.  The elder daughter may have been called Margaret.  The second daughter was Ann and she married, in 1784, Archibald Cochrane, 9th Earl of Dundonald.  Ann and Archibald had a number of sons one being Rear Admiral Thomas Alexander Cochrane, 10th Earl of Dundonald, Marqu do Maranhão GCB RN (1775 – 1860).

Dear George
I wrote you the week before last and intended to have mentioned an event that was likely to happen but Mrs Gilchrist's heart failed her.  However well knowing your sincere friendship for us and ours and as the day is now fixt to fulfil as brother Willie tells me Mrs Marsh's prophesy.  She is set down with tears in her eyes to tell you we are in one sense to lose one of our dear girls in a few days and I really don't know what I shall do without her as she is truly a fine sweet girl yet can have no objection as I hope its for her good to be joined for life to so good and worthie a young man as Lord Cochrane who I look upon as an none such in this deprived age being certainly possessed of ever amiable quality and I flatter myself she is possessed of every disposition capable of making a man happy.  Its my youngest daughter Annie who way of addition to her goodness everybody reakons hansome his Lordship's to all works is turning out to good account.  They are to be married here Monday next week Culross Abbey which is his house near 40 miles from this.  She is not to leave us for some weeks, the Parliament being disolved has given a great turn to the mad work that was going on here as I suppose it has done with you.  Mrs Gilchrist and the girls goes to Edinburgh tomorrow to get some things for Annie is very . . . with one thing and other and begs youll forgive her for this odd scrall and that you will believe both her and me Mrs Marshes and
My dear Commissioner
Yours most faithfully
Gilchrist
Annsfield, October 10, 1774.

[The letter is addressed on the outside as follows:]
George Marsh Esq
Navy Office
London

There is a hand written note on the outside: Capt Gilchrist.  His daughter's marriage to Lord Cochrane, father to the famous Lord McDonald.

Captain Gilchrist has a mention in the diary of George Marsh, page 92.  The relevant extract reads as follows:

24 October 1757
Captain Gilchrist of His Majesty's Ship Southampton and his ships company appointed me their Agent for L'Emerode a French prize and for the St.Denis which they had taken.

16 March 1758
Having sold both these prizes I made up the accounts and paid the prize money.

I was this day appointed one of the Agents to the Danae prize taken by Captain Gilchrist in sight of other of our Ships, in which the brave Captain was terribly wounded, but in reward for his great services, he having behaved most nobly in many other engagements, King George the second settled a pension of £300 a year upon him in addition to his whole or half pay, and directed that all his expenses for the cure of his wounds should be paid and that he should be allowed a year's wages also which altogether amounted to upwards of £800, as he lay many months at Yarmouth and was attended by surgeon etc from London by the King's express order.  Two thirds of the Ball and cup of his shoulder bone being shot away by a cannon ball, of which wound he languished (tho' to appearance healed up, with the loss of the use of his arm) about two years, and died at his house called Ansfield near Hamilton in Scotland. And in regard to his service and gallant behaviour I got his good worthy wife a pension of £100 per annum. He was as honest and as good a man as I ever knew.

Captain Gilchrist is also mentioned in the book 'Cochrane The Dauntless' by David Cordingly, published 2007. 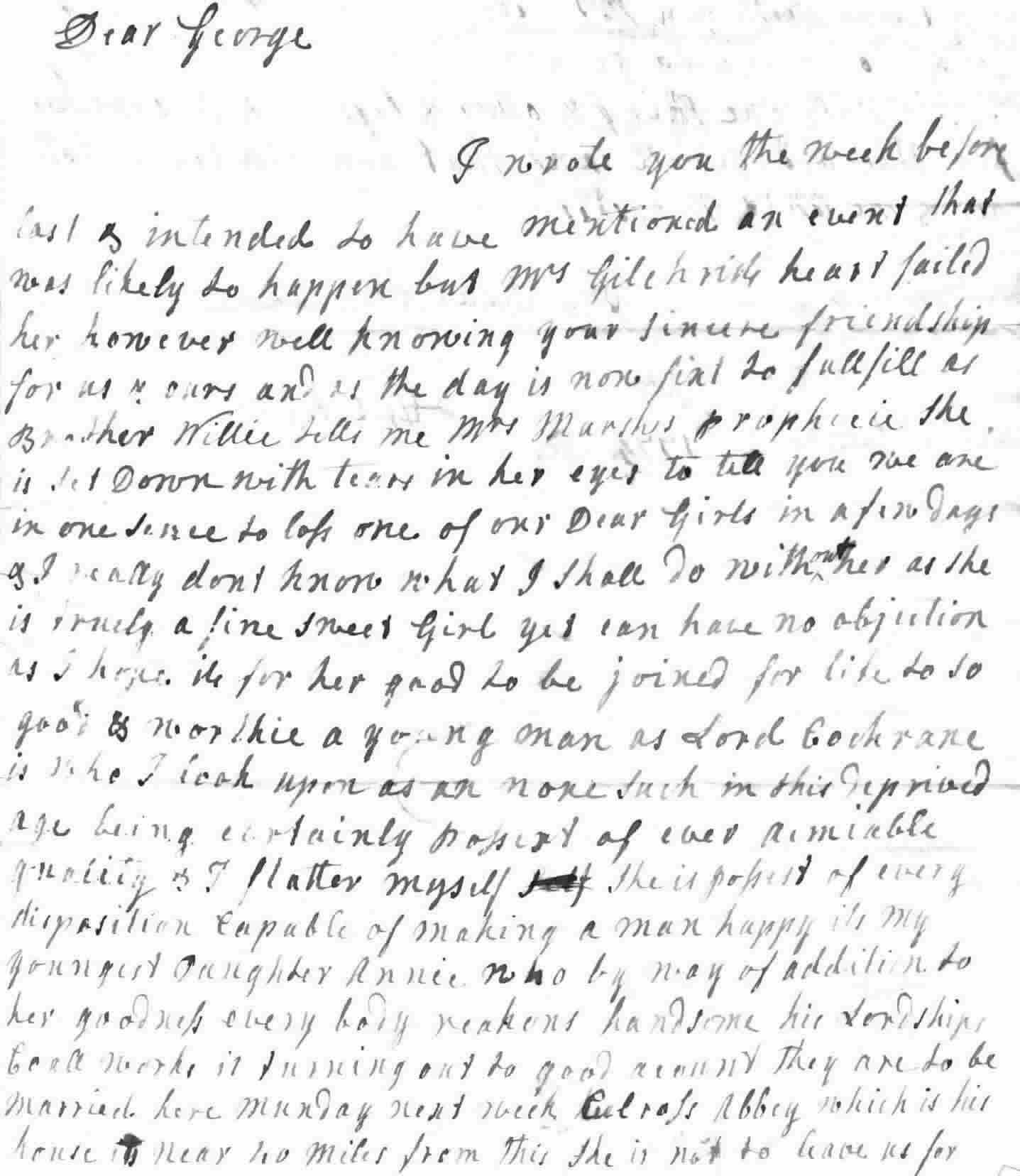 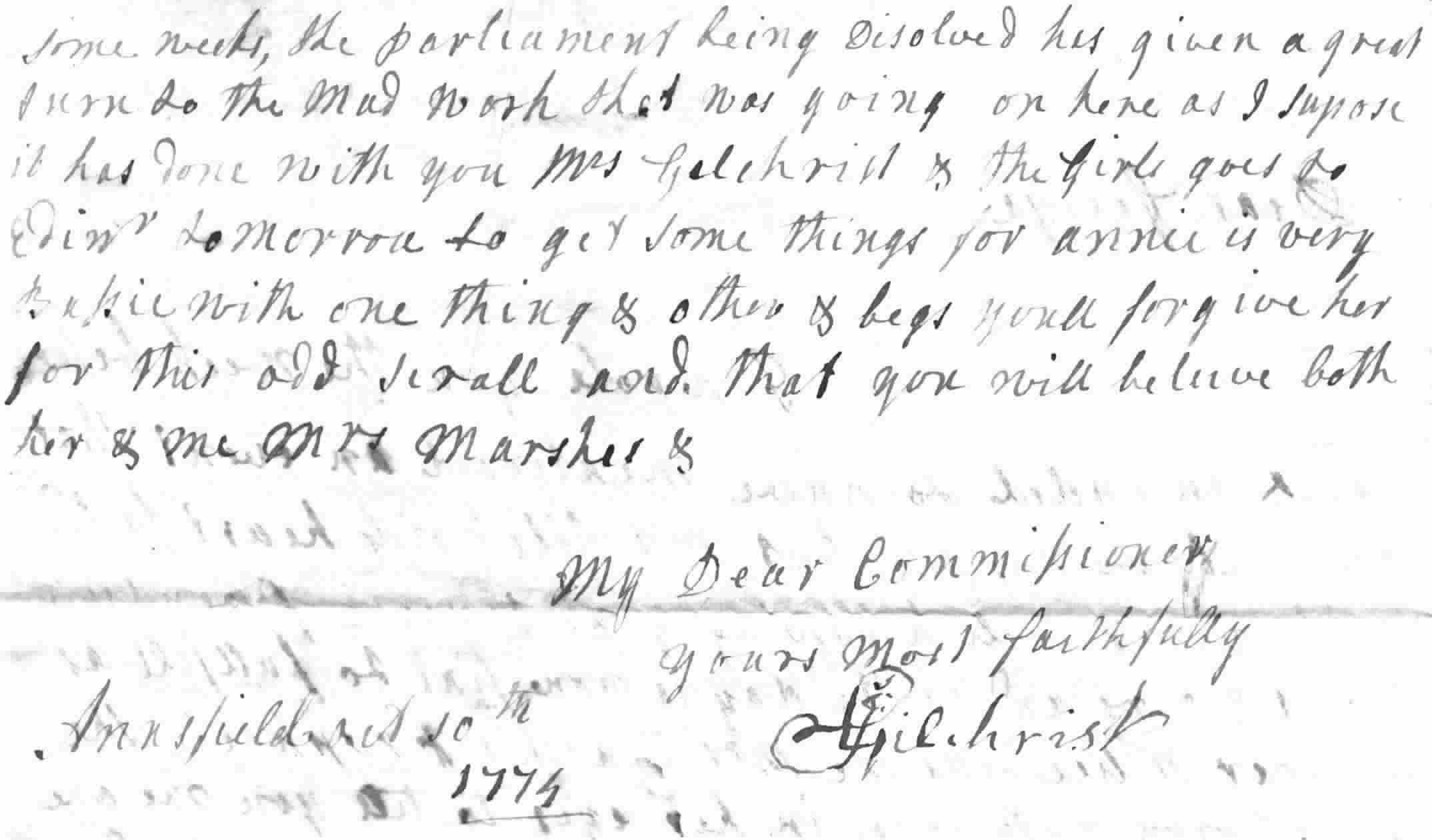