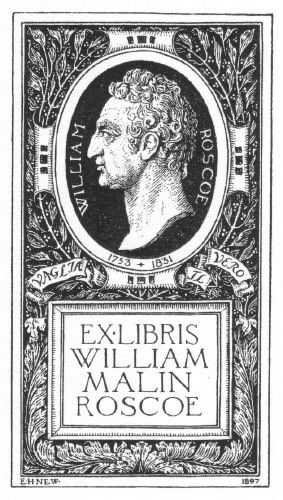 Ray Lampert has written a short biography about William Malin Roscoe as follows:

William Malin Roscoe was born in 1857 in Carnarvon (Caernarfon) Wales.  He had a younger sister Margaret Henrietta (born in 1858) and an older sister Elizabeth Mary (born in 1856).  Their mother Emily Sophia (Malin) was widowed in 1859 when their father William Caldwell Roscoe died (they were only married in 1855).  The 1861 census shows that they went to live with their mother Emily’s parents, William and Elizabeth Malin.

In the 1871 census, young William was living with relatives, the family of John Hutton (who first married Elizabeth Malin) and his second wife Lucy Anne nee Jevons (whose mother was Mary Anne Jevons nee Roscoe). By 1881 William is again living with his mother and sisters.  It is here that he is shown as being a Solicitor's Articled Clerk however he doesn't seem to have pursued law as a career.

In 1882 William married Agnes Muriel Thomas (they had one child, William, who was born in Bristol in 1883).  Hereafter, his profession is listed in the census as Soap (& Candle) Manufacturer.  There were many manufacturers of soap (and candles) in the Liverpool area where William's Roscoe roots were, but he ended up in Bristol working for the company of Christopher Thomas & Brothers where he was one of the directors.  As with many of the soap manufacturers in the Liverpool area, Christopher Thomas & Brothers was taken over by Lever Brothers (now known as Unilever).  After the takeover in 1910, William and two others resigned as a directors (the company did not stay in business much longer).

William Malin Roscoe's final residence was Birchamp House at Newland near Coleford (Forest of Dean), Gloucestershire.  He lived here with his wife Agnes.  After his death in 1915 (he died in London 24th of July, 1915), his wife continued to live at Birchamp, apparently with their son William.  Agnes Muriel Roscoe died there November 12, 1949.  She was predeceased by her son William, who died there February 22, 1949. (The son William is shown in the 1911 census as also being a Solicitor's Articled Clerk).

Having the means to create a nice library for himself, William Malin Roscoe also made a collection of English Glass as is noted in an article by W.A. Thorpe in the October 1935 issue of the 'Connoisseur':

'The sensibilities of his ancestor descended to William Malin Roscoe, who formed this collection.  Mr. Roscoe passed his working life at Bristol, his later years in Herefordshire and at Birchamp, near Newland, a pretty village between 'The Forest' and the Wye. He brought together his glasses between 1894 and his death in 1915.'

William must have built up quite a large library.  Books with his bookplate in them, turn up from time to time for sale.