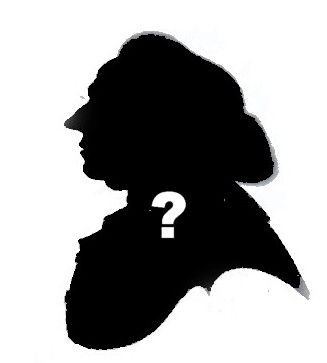 From the book "Thomas Bentley" by Richard Bentley:
"...One of Bentley's early friends was Mr Thomas Stamford of Derby, an engineer of resource and ingenuity, and who, introduced by him about 1765 to Wedgwood, was able subsequently to render considerable assistance in devising special tools or appliances for use in the pottery works.  Stamford was father of a son and four daughters (Mr Jewitt states that Mr Stamford was married twice).  Being frequently at his friends house, Bentley in course of time became attached to one of the girls..."
"...the wedding of Thomas Bentley and Mary Stamford took place on June 22, 1772..."
"...Mary Bentley died on February 19, 1797, and was buried in the Parish church at Chiswick with her husband on February 25.  She made her will a year previously, her sister Martha (Mrs Ralph Nowsham) being executrix of it, and mentions another sister, Sarah Stamford, as living unmarried in 1796.  Reference is also made in the document to a "cousin Bentley" and to her two nieces, Mrs Elizabeth Caldwell and Miss Hannah Stamford..."

A portrait of Thomas Bentley existed at the Caldwell home of Linley Wood up until 1949 when the house and its contents were sold by Capt CH Heath-Caldwell.  This portrait was auctioned at Sotheby's on 2 November 1949 lot number 84.  I am not aware of its present whereabouts but it is not the portrait in the Wedgwood Museum, Stoke on Trent or the portrait in the Walker Art Gallery, Liverpool.

From the book "Life of Josiah Wedgwood" by Llyewellynn Jewitt, 1865:
"The Stamfords were a family of considerable standing in Derby, and the half brother of Mrs Bentley, Thomas Stamford the younger, was mayor of that borough in 1769.  Thomas Stamford, the father of Mrs Bentley, was twice married, she being the issue of the second marriage.  His son Thomas was also twice married; by his first wife he had no children, but by his second who was Sarah [should say Hannah?], the eldest daughter of John Crompton of Chorley Hall, of the widespread and prosperous family of Crompton, to which Samuel Crompton "the inventor", Sir Charles Crompton, the present respected Judge, and the families still reside in Derby, in Lancashire, and in Yorkshire, belong - he had two daughters, one of whom [ Elizabeth ] was married to James Caldwell, Esq., of Linley Wood, Staffordshire, and was the mother of the gifted and popular authoress of "Emilia Wyndham", and many other works - Mrs Marsh-Caldwell."

I have found a note on the internet about Jedediah Strutt (1726-1797) who was a textile manufacturer.  This note reads as follows:
"In early 1758 Strutt visited London with samples of the ribbed hose he had made using his invention. Strutt hoped to find businessman willing to back his stocking frame. This ended in failure, but later Strutt and Woollat formed a partnership with John Bloodworth and Thomas Stamford, two substantial hosiers from Derby. The four men obtain a patent for the invention and began producing the machine. In 1762 Bloodworth and Stamford, impatient with the slow sales of the stocking frame, left the partnership."

I have passed down in the family two publications relating to the 1745 rebellion, both of which mention a "young Mr Stamford".  As these publications appear to have always been in the family I think it is safe to assume that these both refer to Thomas Stamford the younger.  The more comprehensive is headed:
"A Plain, General and Authentic Account of the Conduct and Proceedings of the Rebels During their Stay at Derby, From Wednesday the Fourth, till Friday Morning the Sixth of December, 1745".
It reads as follows:
"On Wednesday the fourth of December, 1745, about Eleven o'Clock in the Forenoon, Two of the REBELS Van-Guard rode into the Town of DERBY, and at their Entrance into it, gave a Specimen of what was to be expected from such a Set of Villans, by seizing a horse belonging to young Mr Stamford, whose Servant being mounted thereon, and riding from them, was persued and taken, by the horse's falling down: After which they enquired for the Mayor's House, and demanded billets for 9000 men or more, then rode to the George Inn, where several Person's were employed preparing Billets according to their Orders..."
The second publication is a copy of the "Derby Mercury, Number 38, Volume XIV" and contains a summarised copy of the same account of the Rebel's visit.

I have a legal document "Assignment of Mortgage" dated 7th April 1757, and signed by a Thomas Stamford of Loughborough, William Swan of Loughborough.  It also mentions a Samuel Stevens of Quaru(?) otherwise Quarudou in the county of Leicester, and a William Charles.  This document turned up in an auction in 2004 but I have no knowledge of its provinance or whether this Thomas Stamford is the same person as my Thomas Stamford.

Thomas is mentioned in the book "Collection of Fragments Illustrative of the History and Antiquities of Derby" by Robert Simpson, 1826.  This notes him in 1768 signing an Act "for selling part of a Green" in Derby.  It also notes him as Mayor of Derby in 1769 and notes his wife's cousin Samuel Crompton (1720-1782) as mayor a few years earlier in 1767.

There are two orders from Thomas Stamford to Josiah Wedgwood for some tableware for Mr Henry Coape of Duffield.  These are in the Wedgwood collection at Keele University (11-9610 © WEDGWOOD MUSEUM TRUST 2004.  ALL RIGHTS RESERVED).  Mr Henry Coape was a cousin of Thomas' wife Hannah Stamford (nee Crompton)  The first order is the main order and contains a long list of tableware.  The second order is much shorter and reads as follows:
12 July and 9 September 1771
I have this day received from Henry Coape Esq £5:13:6 on &ldots; which I will remit you by Mr Bentley or the first opportunity that offers.  Mr Coape's Request you will send him these few articles to complete his table wares with which he is highly delighted.  Royal Pattern
2 oval dishes 18 inches
4 oval dishes 16 inches
1 round scalloped baking dish 12 inch diameter not high
2 round dishes 11 inches diameter
2 fruit baskets and stands
I now entertain the pleasing hope of daily hearing my dear friend and cousin has fixed the time of his departure from London and
. . .
Sir Your Very Humble Servant
Thomas Stamford.

By his will Thomas Stamford (the younger) left £3000 to his daughter Hannah Stamford, £1000 to his daughter Elizabeth Caldwell, and an annuity of £40 per year to his sister Rebecca Stamford, the remainder to his wife Hannah Stamford (nee Crompton).  Thomas wrote his last will 2 July 1784, it was proved 14 September 1787.  The will was still unadministered when Thomas's wife Hannah also died and so a short while later, 27 September 1788, the remaining part (presumably the main part) of his estate was left to his unmarried niece Hannah Stamford.

Thomas Stamford presumably built up a good library as we know that he did subscribe to the following books.

1749. Discourses on all the principal branches of natural religion and social virtue.  By James Foster (1697-1753). Printed for the author; and sold by Mr. Noon … London 1749-52, 1749. . An important work by an intelligent and very popular divine, whose thinking displays a common tendency on the part of dissenters to drift towards rationalism, and even deism; Foster died shortly after the second volume was published. Included are chapters on such subjects as education, the duties of wives and children, the relationship between masters and servants, civil government, etc., etc. With a portrait in Vol. I, and a 37-page list of subscribers in Vol. II, a list which includes a diverse array of familiar names, such as the poets Armstrong and Akenside, the philanthropist Thomas Hollis (10 sets), the philosopher David Hartley, and many others.  Henry Coape is also listed as a subscriber.

1778. AN INQUIRY INTO THE ORIGINAL STATE AND FORMATION OF THE EARTH deduced from facts and the laws of nature.  To which is added an appendix containing some general observations on the strata in Derbyshire.  Written by John WHITEHURST.  Published by J. COOPER LONDON (1778).  There is no copy listed on the Linley Wood library list.  John Whitehurst of Derby, a clock maker, engineer and scientist made clocks for Matthew Bolton. He was made a Fellow of the Royal Society in 1779. He contributed to the evolution of geology as a major science. Benjamin Franklin, Erasmus Darwin and Josiah Wedgewood were collaborators in geological investigation, and he sent Franklin an outline of this work, propounding a theory to enable geologists to predict which rocks might exist beneath those close to the surface, including detailed section diagrams through the strata in Derbyshire as part of his evidence. Whitehurst was the eldest member of The Lunar Society and introduced Joseph Wright of Derby to the Lunar circle. 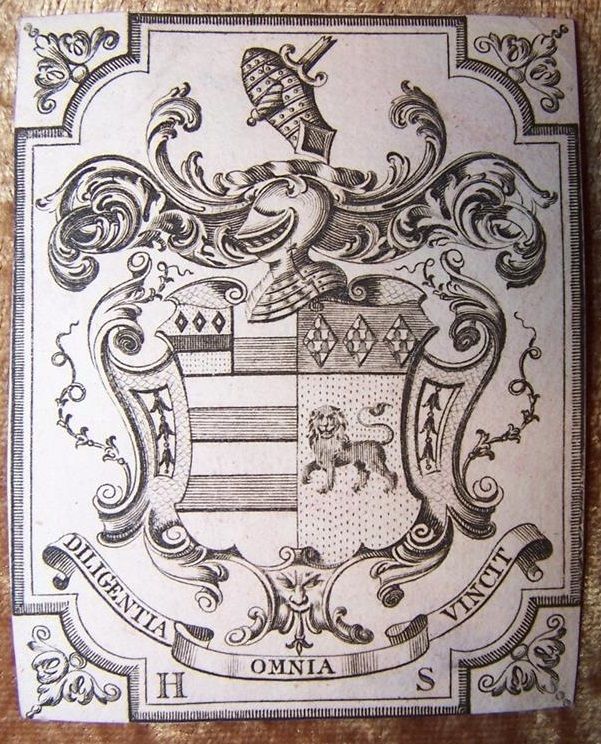 Bookplate showing Stamford and Goodwin. This would have been owned by a man called H Stamford who had a mother who would have originally been Miss Goodwin. Who was H Stamford?

If you have more information to add please do contact me.