I have lots of people to thank, all those who helped me in New Zealand during the period 1959 to 1979 and those who have helped me over the last few months while I have been putting my story together.

Top of the list is my mother who endured all sorts of difficulties but just kept moving forward, when a lot of people in her situation might have just given up.  Life for our family was very difficult but the good thing is that we all get on well and we keep in regular contact.  Many thanks also to my sister Hilary and my brother Michael.

I would also like to thank all our family friends who gave us lots of help.  Sadly, some have now passed away but I will record their names anyway.  Ann & Don Klenner, Shirley & Warwick Martin, Denis Walker, Pat & Upham Steven and Jill & Peter Walker.

Also a thank you to David & Dianne Roger’s mother (Miria Rogers) who came to school and taught us Maori studies.  The headmasters during my time at Avon were Cyril Cook up to and including 1969 and then Bob Fitzpatrick.  If I could go back in time, I would like to give all these teachers 5 gold stars for their good work.

I would also like to thank everyone in my class at Avon.  Of those who started in Primer 1 (1965), about half of us stayed right through to Form 2 (1971).  We had pupils who joined part way through, or left part way through, and we had some who were there one moment and then gone the next.  We all had good times together and bad times but we were together and it is wonderful now to look back at some of the old black and white class photographs that record a moment in time for each of those years.

Many thanks to Lee Coles who helped put me in contact with a few of the other teachers from Avon.  She also taught my brother Michael.

Over the last few months, I have remade contact with quite a few of my fellow pupils and have had some excellent conversations and exchanges of emails.  This has helped me a lot remembering all those things we did together.  Many thanks to Janet King (Sulzberger), Murray Wharton and Nigel Dey who managed to send me copies of our old school photos.  Also thanks to Bruce Clarkson who was able to tell me some of the funny things as viewed from the perspective of a teacher.  Thanks to David Rogers, Denis Wheeler, Elizabeth Shelton-Agar (Capper), Gayll Rassussen (Buckthought), Joe Sheehan, Prudence Walker, L'raine Eason (Hill), Carolyn Barbarich (Maaka) and Rebecca Instone (Western).  Special thanks to Janet King (Sulzberger) who has also given me some excellent help with the editing.

Many thanks to Colin Klenner who I had known since the age of 3 and we met up again when we started in the 3rd form at Stratford High School.  Recently back in touch, Colin has given me a lot of help figuring out the names of our various teachers.  Also many thanks to Deborah Van Dam who gave me a photo of 3C2 and also helped me with the names.

While at Stratford, I was a member of Cubs and Scouts.  We were very lucky to have an excellent troop and this was due to all the voluntary work that the various leaders put in.  I can’t remember their names but I look back and I really do appreciate all that they did.

At Whanganui High School (1973-1974) my teachers were: Roy Lupton (Chemistry and the tramping club), David Lang (Physics), Colin Milne (English), Mr Walker (French), Sandra Gavin (Maths), Nigel Rankin (Maths), Doug Smellie (History), Eva Parker (Biology), Graham Wakely (Woodwork), Stan Davis (Metalwork), Don Kilpatrick (Careers Advice), Leith Power (Deputy Principal).  And again I would like to thank all my fellow students, particularly those in my form class (4F) photo.  Thanks to Tyronne Mulligan who has helped me to figure out most of the names of our fellow students appearing in the photo.  Thanks also to Leith Power for his memories.  Special thanks to Colin Milne who has helped me with the names and has also done a lot of excellent work helping with the final editing.

Special thanks to Geoff Martel, John Freebairn and Alan Mountfort, who I recently met up with at a School reunion.  And also Michael Godfrey who I met in Napier a few years ago and we have kept in contact on facebook.  Many thanks also to Richard Bourne and the staff at the excellent Collegiate School Museum.

At the University of Otago, special thanks to Professor Jack Dodd and Keith Dawber from the Physics Dept and Gloria Olive (Maths).  My first year (1977) was spent living at Arana Hall and I would say thanks to everyone that I shared my first year with.  I would also like to thank: Allan McRae, Jane Reddish, Judith O’Malley and Murray Simpson, for such a good year in 1978 when we shared a flat together and also to Jane Wilson and Sue Dewes who joined us the following year.  While at Otago I met lots of students and some names I remember and some I don’t but many thanks all.  Otago was a very happy 3 years.

Extra thanks to Allan McRae who I have met up with quite a few times on various outdoor adventures in New Zealand; Tongariro Crossing, Mt Taranaki Summit, Lake Waikaremoana.  Much of this book I started formulating in my mind, earlier this year, when we spent 5 excellent days canoeing down the Whanganui River.  Allan told me that if I wrote a book he would definitely read it so I certainly hope I will achieve an audience of at least one.

From late 1977 to early 1980 I was a Territorial Soldier and this was a fantastic interlude.  I don’t remember any of the names but I do remember a lot of the excellent experiences.  Thank you to everyone in the New Zealand Army and the Royal New Zealand Infantry Regiment.

Lastly I would just like to thank a number of my friends who have read various versions of the story and given me a lot of very useful thoughts and comments.  Thanks to Alison Simmonds, Mark Burley, Jell Ellis, Steve Feeney, Fiona Arnott and Pamela Hannam-Saunders.  Also thanks to my cousins Tinka Walters and Claudine Brown for all their encouragement.

In this story I have done my best to present everything as it was from my perspective.  I have expressed my views as I see them even if my views on occasions are not politically correct.  Some people will agree with them and some people will disagree.  The only other thing that I can add, is that I was there at the time and this story is all about my perceptions of what was going on around me.  I hope you have found it to be of interest.

Well done for reading this far.  You have now reached the end. 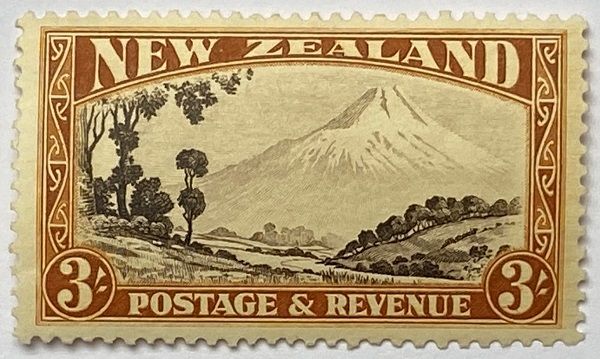 One last stamp. This one showing Mt Taranaki (Mt Egmont) from the 1935 pictorial set, 3 shillings.

This view is taken from a location near Hawera