It was during our time in Whanganui that Mum met Frank Wright.  He had two children, Joy and Paul.  Frank’s wife had died a few years earlier and Frank was at this time living with his elderly parents Frank senior and Norma.  Joy was the same age as Hilary and was attending Whanganui Girls College.  Paul was much older and lived with his wife and two young children at Taupo. 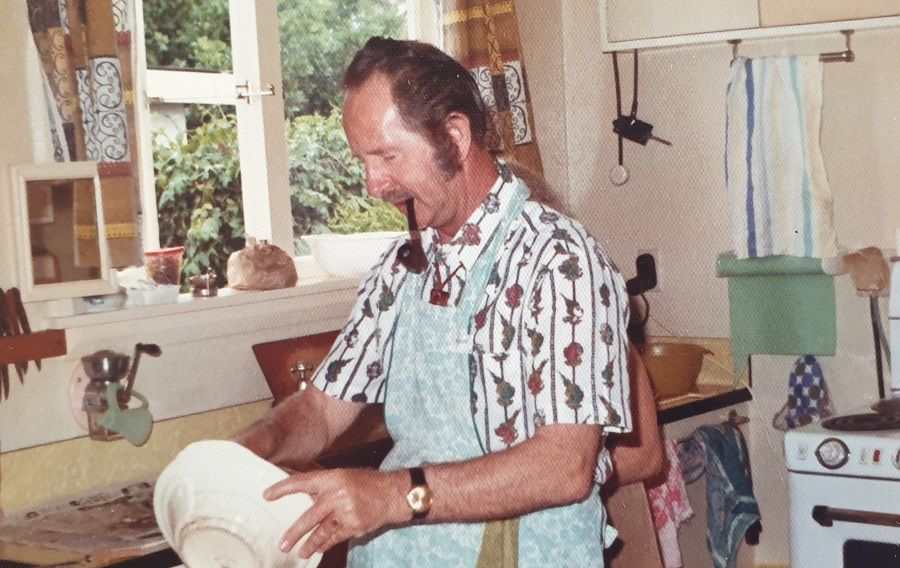 1974: Frank Wright at his parent’s house at Totara Street.

During the latter part of World War II, Frank had joined the Royal New Zealand Air Force and he had been lucky enough to be selected for pilot training.  He experienced the great adventure of travelling around the world and living in England for a few years, but he never actually went into action.  When his pilot training was completed, and he had earned his wings, his first assignment was helping to train more pilots and he really enjoyed this.  Then on the 8th of May 1945, the Nazi Germans surrendered and it was all over.  Frank was able to come back to New Zealand in one piece.  He had been incredibly lucky.

Frank loved flying and so he took it up as a permanent career, becoming a pilot instructor.  He had worked in various aero clubs around the country and he had also spent some time on a project in Thailand.  Now he was working for the New Zealand government, on an aid project for Bangladesh.  The first batch of 4 Bengali students were being trained at the Whanganui airport and later, Frank would be going to Bangladesh to set up a flying school there.

By now the farm at Tuna had been sold and my mother had enough money to rebuild our house.  Peter Walker did this for us and it was fantastic seeing this amazing project happen around us.  I had always liked woodwork and living in the middle of these major alterations, got me even more interested in carpentry.  I was also able to do odd jobs and one I remember was dismantling the old chimney.  To do this, I climbed up onto the roof and then chipped away at the chimney, brick by brick, and then dropped them down the inside.  Each brick made an almighty bang as it hit the bottom, crashing into the hearth and then bouncing out into what had been the lounge.  I chipped away at the bricks at the top and Michael handled the other end of the operation, picking up the disintegrating bricks and being fairly careful not to be hit by any disintegrating pieces bouncing around the room. 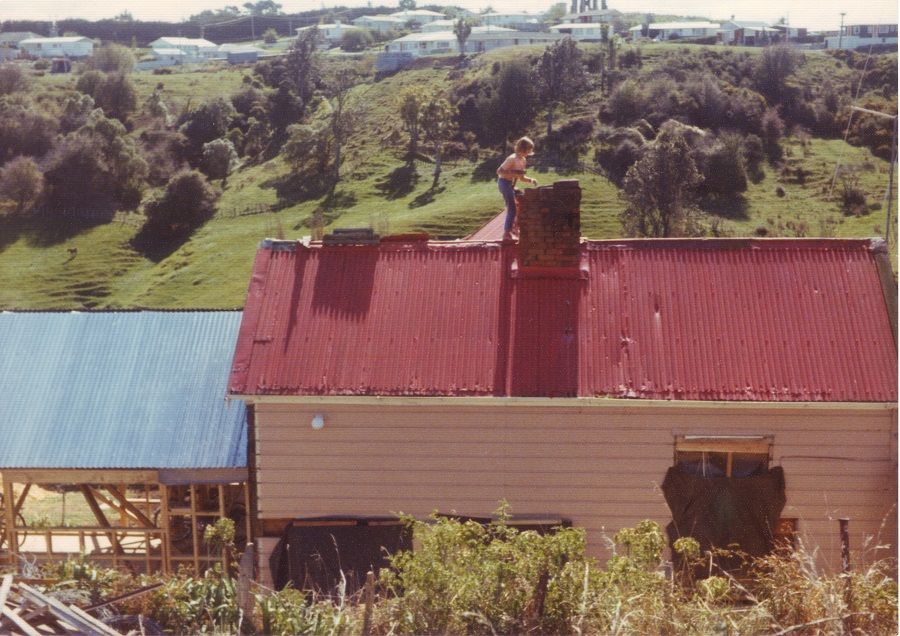 1974: JJ (Jeremy James) on the roof of the house at Shakespeare Road, Bastia Hill, Whanganui. Taking the chimney down brick by brick. No need for safety hats or scaffolding or ropes.

Looking back, I have often wondered what would have happened if I had left school and become a carpenter.  I might have progressed on to having my own building company and after that I might have become a land developer.  I possibly would not have flown around in aeroplanes very much, but I might have ended up being very very rich!

Frank and Mum got married around this time and Frank and Joy moved in to live with us.  I should note here that my parents, although separated for 10 years, had never actually been divorced.  Prior to Frank, my mother had never had, or even sought, a relationship with anyone and I think my father during this time had probably been the same, but after 10 years they both decided that it was probably best to make new starts.  Their divorce was sorted, and Mum and Frank then got married.  A short while later James followed suit and married a lady called Mae who had been a fellow patient at the Tokanui Mental Hospital.

Suddenly having Frank and Joy living with us was very different but we all got on, so no great problems.  We also got to know Frank’s parents Frank Senior and Norma but I never felt confident speaking to them, as it was never decided what we should call them.  Calling them Mr and Mrs Wright would have been a bit formal, calling them by their first names would have possibly been disrespectful and calling them Grandma and Grandpa would just not have sounded right.

Frank senior was very good to me and taught me how to use wood stains and paint.  He also told me about his time in WWI when he had fought at the Battle of the Somme in 1916, which was one of the largest battles to have ever taken place.  From all the countries involved it is estimated that there were over 1,000,000 casualties and of these approx 300,000 where killed.  Altogether, it is estimated that about 20,000,000 people died in WWI.  Frank senior was wounded in the leg and underwent an operation, the makeshift operating table being a couple of haybales.  He was then transported to the UK where he spent some time recovering in a hospital near Brockenhurst, after which he was evacuated back to New Zealand.  He said his main memory of the battlefield was “everywhere you looked was mud, bits of bodies and rats”.  He was also very proud to tell me that the very ship that he travelled in, was now the wreck of rusty iron down in the breakwater at Castlecliff (Te Anau 1879-1924. The interior of the main cabin from this ship is now on display at the Wellington museum).

Our new stepfather Frank (junior) set off for Bangladesh towards the end of 1974 for the second part of the government aid project (to set up a pilot training school in Dacca).  Meantime we started making our own preparations to join him.  I remember getting vaccinations for Cholera, Typhoid, Yellow Fever and Smallpox.  A week afterwards we all felt a bit sick but apparently this was normal.  Once our school year had finished, we packed up the house and set off on our big journey.  Moving from Stratford to Whanganui two years previously had been a big change in our lives and now we were about to experience an even bigger change. 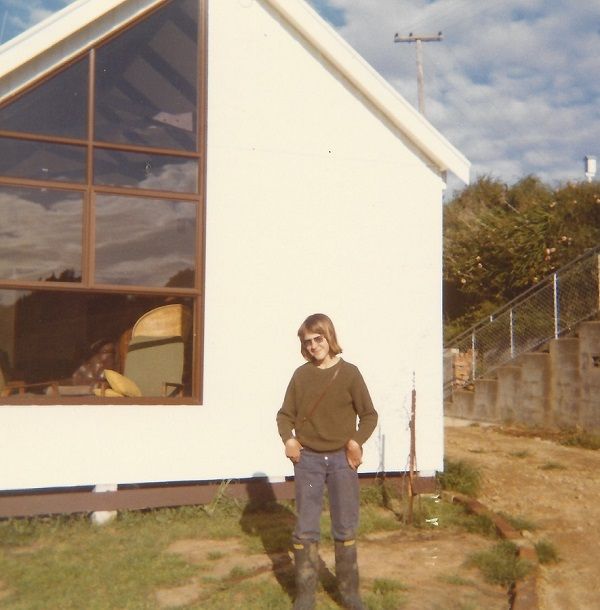 1974: JJ in front of the house at Shakespeare Road, Bastia Hill, Whanganui.