In about October of 1959 they took up a job near Hawera working for a farmer by the name of Les Bent but expectations of regaining the happy times that they had experienced with the Gopperths at Pihama were quickly dashed.  They found their house was full of fleas and although Les Bent’s wife was a lovely lady, they found Les Bent to be a fairly horrid person to work for.  The house was extremely dirty and the tap water tasted a bit grimy.  The bad tap water was explained a short while later when Dora found two dead birds floating in the water tank.  Luckily for James and Dora, they knew they were not going to be staying too long so life was endurable (as long as they boiled the tap water).

While living at Hawera, they were joined by Dora’s mother (Dora senior or Nana) who had saved up her sixpences in a glass jar until she had enough money for a trip to New Zealand.  Nana was quite practical and very organised, but she was also quite a domineering woman and she and Dora did not have the best mother – daughter relationship.  Nevertheless, they were incredibly pleased to be reunited.  Years later, Nana told me that she absolutely loved her first visit to New Zealand as she had done very little travelling in her life and being able to see her first two grandchildren made everything wonderful.  This was even though I had apparently bitten her quite badly on the end of her finger.  But there you have it, most grandparents enjoy the company of their grandchildren. 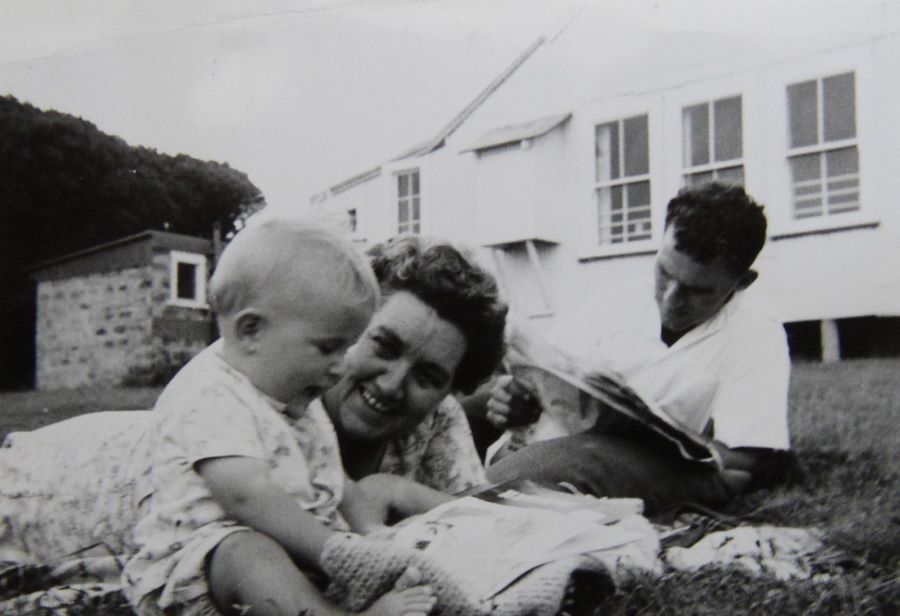 1959: Jeremy James with his grandmother Dora Bailey and father James at Hawera.

During this time another odd situation arose with James over his frugal habit of seldom wanting to part with money.  Nana momentarily ran out of cash and while waiting for more money to be sent out from England, she asked her son in law if he could possibly give her a loan to tide her over.  Her request was met with a rather emphatic no and this was a bit of a shock to both mother and daughter.  James did however pay for a ticket for Nana to travel to the South Island to visit her cousin Maggie Ikin in Dunedin.

The money from James’ inheritance had now arrived and so it was full steam ahead looking for a suitable farm to buy.  They did some more journeys by car to see a few farms up in the Waikato and an excellent sheep farm at Karapiro.  They would have loved to have bought the Karapiro farm but sadly it was not within their budget.  They had also looked in Taranaki and the farm they chose was at a place called Tuna which was about 5 km to the north east of the village of Midhirst (10km from the town of Stratford).

We don’t have a record of how much they paid but I assume it was approx £10,000 (this being before New Zealand decimalised and changed to dollars in 1967).