My Parents: James and Dora: Their Family Backgrounds

My mother Dora was from a reasonably normal English background (working-class).  Her mother (also named Dora) was the daughter of a coal miner.  Dora senior had married twice.  Her first husband had been Richard Stanley Jones (known as Stanley) and they had two daughters but Stanley had left when my mother was about 7 years old and her sister Edna (known as Emma) was about 5.  Stanley then took up with a new wife and he made no further contact with his two daughters.  My mother did meet up with him 40 years later and it was a very happy reunion.  She found Stanley to be quite an interesting character.  He had made a lot of money in the 1930s, as a house builder, but his business came swiftly to an end when war broke out in 1939 and perhaps that had been a big part of the troubles in his first marriage.  During the war he became an electronics engineer, working for the government on radar projects.  After the war, he continued in the civil service and worked at the Atomic Weapons Research Establishment (AWRE), Aldermaston, where he worked on the control systems for the various UK atomic bomb projects. 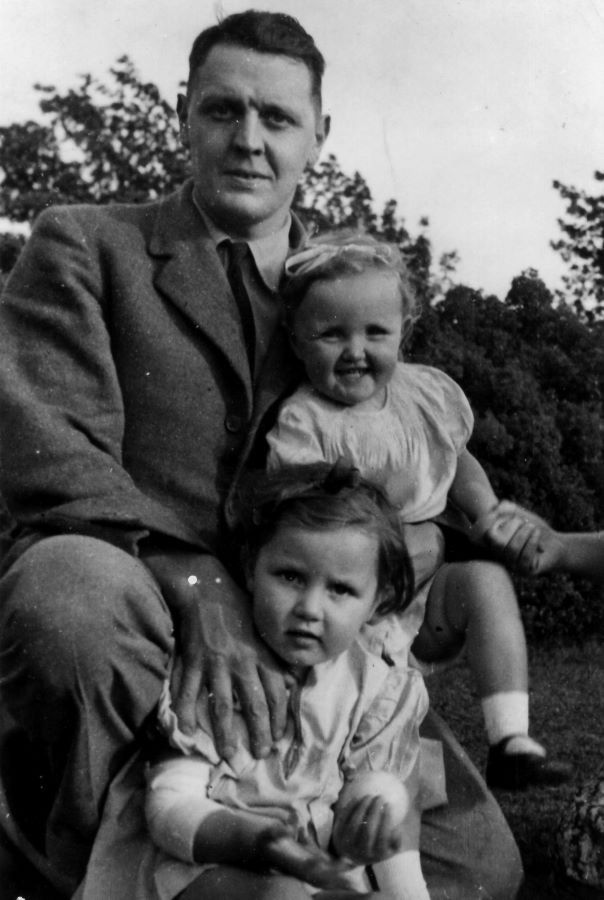 Richard Stanley Jones (known as Stanley) with his daughters Dora and Edna (known as Emma). Picture probably taken around 1939

So, Stanley had left, and the person that Dora junior got to know was her mother’s second husband Les Bailey.  He was a very straight forward practical person, who built things out of metal.  Dora and Emma got on with him very well and he became their new dad.  They called him ‘Pop’.  He also had two daughters, Sonia and Hilary, so Dora and Emma gained two stepsisters. 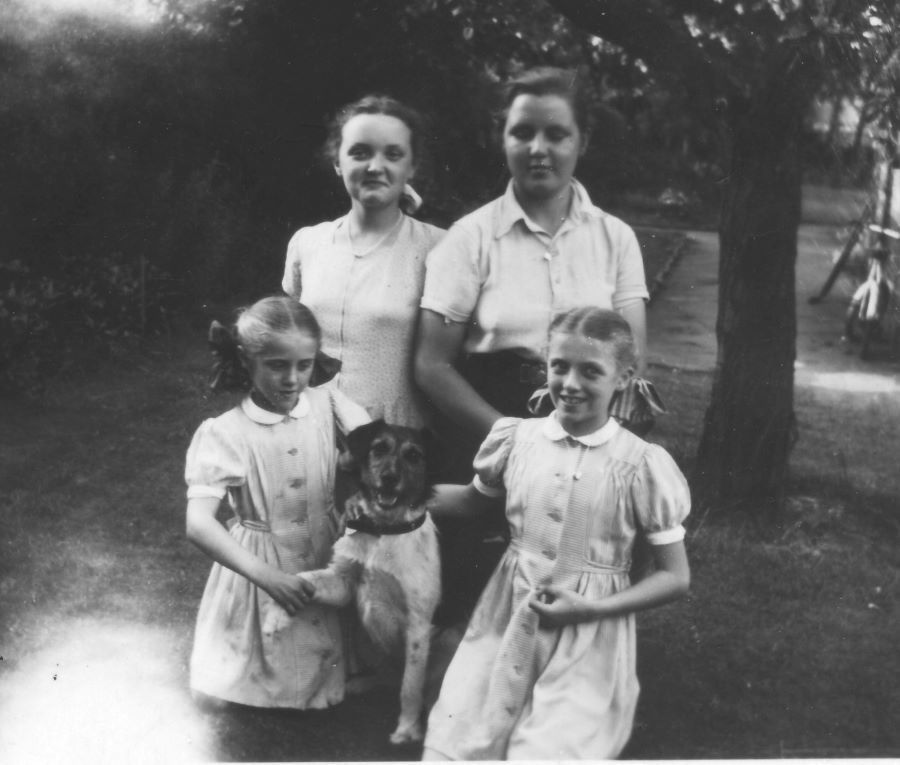 Edna and Dora Jones (at rear) with their step sisters Sonia and Hilary Bailey (at front). Picture probably taken around 1947 under the plum tree at Trent View, St Helen’s Grove, Burton Joyce.

Dora did quite well at school and would have liked to have progressed onto university, but her mother felt strongly that Dora would be much better off, leaving school and getting a job.  This was how most working-class people saw it.  University was for the toffs and it was expensive.  Much better to leave school as soon as you could and get a paid job.

So, with no opportunity for university, Dora left school and took up a job working for Boots the Chemists.  This she did for a few years, but she kept hankering for a better education and in the end her mother agreed that she could go to agricultural college and do a one year diploma course.  In 1955 she went to Kingston Maurward College, near Dorchester, and it was there that she met her future husband James.

James’ family were definitely from the other end of the social scale.  They were ‘landed gentry’ type of people and they were all well spoken, charmingly polite, and reasonably well educated.  Among his many ancestors there were a lot of interesting people who had done quite amazing things in their lives.  I won’t go into detail, as that would be another book, but the following list, mainly of his male forebears, gives a flavour:

King Alfred the Great 848/849-899. He who burnt the cakes.  First English king to make full use of the new technology called reading and writing.

John Napier 1550-1617.  The Inventor of Logarithms.  He was very good at multiplication and division.

Francis Marsh 1643-1714. Mariner and trader, who was shipwrecked off the Isle of Wight in 1694.  Before his ship went down, he put his bible and his money into a pig skin for flotation.  He was the only survivor and his bible still exists, with the story written on the inside cover.

William Long 16??-1723.  "An extravagant immoral and profuse man who was in and out of debtor’s prison".

Robert Crowe 1710-1788.  Lawyer in Norfolk.  In his youth, James had looked up at a magnificent portrait of Robert, every time the family had tea in their dining room.

Phyllis Hopkins 17??-1794.  Lived in India with her husband but he died.  Phyllis and her daughter Sarah then moved in and lived with her son in law, Gen Richard Smith, who took special care of them.

Gen Richard Smith 1734-1803.  Soldier and adventurer.  Made lots of money in India working for Robert Clive.  Richard married Amelia Hopkins but he then got her sister Sarah pregnant.  His wife Amelia must have been very upset, but they named the daughter after her to make her feel a bit better.  We can assume that his mother in law, Phyllis, was probably not very amused.  He later returned to England and took up a very popular past time, called gambling.  He wasn’t very good at cards and he lost all his money.

Arthur Cuthbert 1734-1788.  Financial wheeler-dealer, who made tons of money in India.  The government needed to send money to India and the traders in India needed to send money home.  Arthur organised the transactions both ways and he kept 10%.  He stepped in and married his cousin Sarah Hopkins, took her daughter Amelia as his own, and everybody was happy.

William Marsh 1755-1846.  Failed banker, who lived a remarkably long and charmed life.  He married three times and outlived all his wives and he also outlived quite a few of his children.

Amelia Marsh nee Cuthbert 1765-1793.  Her genetic father was Gen Richard Smith but she probably thought her father was Arthur Cuthbert.  She was the first wife of William Marsh, who at the time was a rich banker.  She died young but we remember her by her beautiful portrait painted by John Russell.

James Heath 1757-1834.  Engraver who copied paintings and illustrations onto copper plates so that printers could make multiple copies to go inside books.  The quality of his work was exceptionally fine.

James Caldwell 1759-1838.  Lawyer, businessman and protégé of Josiah Wedgwood.  He was an incredibly remarkable person and he was the ancestor who bought the Linley Wood estate.  A lot of his possessions, including his diaries and some of the books from his library, were passed down in the family.  His portrait hung in the sitting room.

Arthur Cuthbert Marsh 1786-1849.  Born into a rich banking family but the collapse of the family business very much overwhelmed him.  He married James Caldwell’s daughter Anne.

James Stamford Caldwell 1787-1858.  Lawyer, who inherited the Linley Wood estate from his father.  Stamford did not marry and had no children, so he left the whole estate to the second son of his niece Mary Emma Lady Heath.  Large portrait in the garden room.

Robert Hesketh 1789-1868.  Businessman and diplomat who lived in Brazil.  He married a beautiful girl who was 30 years younger.  I think he had a very happy life.  His impressive portrait was also in the dining room.

Anne Marsh Caldwell 1791-1874.  Author who wrote lots of novels for Victorian ladies.  She published anonymously as she and her husband did not want people to know that she earned money by writing books.  Sadly, the family had not kept any of her novels.

Richard Jones 1814-1888.  Doctor, who married an heiress, who was 13 years older than him.  They had three children and indications are that they were a very happy family.

Adm Sir Leopold George Heath 1817-1907.  One of the key men who finally brought slavery to an end in the late 1860s.  He married Mary Emma Marsh and their children were all amazingly successful people.  His naval sword had been passed down in the family to my father James.

Col Henry Helsham-Jones 1838-1920.  Royal Engineers.  Spent much of his army career in India and Egypt.  His wife died very young.

Maj Gen Frederick Crofton Heath-Caldwell 1858-1945.  Royal Engineers.  He saw fighting in Egypt and South Africa and his last posting was helping to set up the Royal Air Force.  He inherited the Linley Wood estate from his grandmother’s brother.

There were many family homes and estates owned by various ancestors but the home that my father had known very well was Linley Wood in Staffordshire.  His grandfather Maj Gen Frederick Heath-Caldwell had taken possession of the estate in 1913 and it was at that time that he had changed his name from Heath to Heath-Caldwell, the addition of Caldwell being a requirement in the will of his grandmother’s brother James Stamford Caldwell. 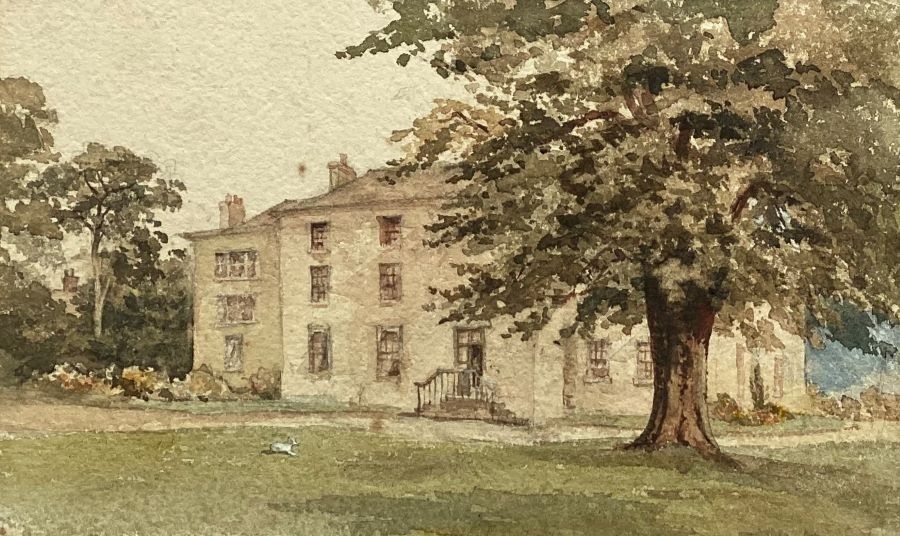 Linley Wood. The home of the Caldwell family from 1789 to 1945. Staffordshire, England. Painting produced probably in the late 1800s while the Miss Marsh-Caldwells lived there.

The Linley Wood estate consisted of approx 1000 acres and up on the hill overlooking it all was the huge mansion, generally referred to as Linley Wood.  The estate had been brought in 1789 by James Caldwell and had been passed down in the family.  Over the generations the mansion had steadily been filled by a vast collection of furniture, paintings, portraits, china, silver, books, diaries and other family artefacts, passed down over 200 years, from various branches of the family.  The mansion also housed a magnificent private library, with numerous volumes covering a diverse range of topics.  Some of the books dated back to the 16th century. 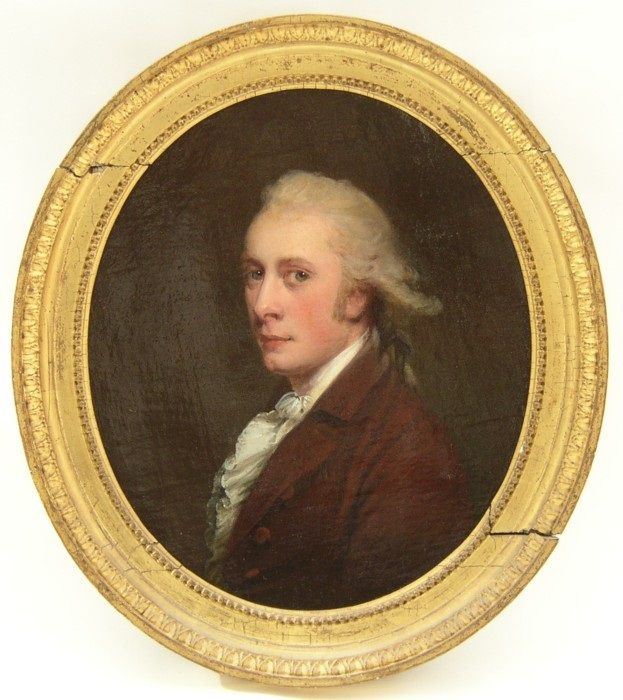 At the end of World War I (1914-1918) the United Kingdom and the allies had beaten the Germans but Britain was very short of cash.  On top of this the government had borrowed a lot of money from America and this needed to be paid back.  At the same time, the British Empire was on the decline.  The vast flow of wealth, that had been generated from the huge amounts of trade in the empire, was now on the decrease.  Member countries were starting to become more independent and one by one, the strong ties of economic trade were reducing.

For over a hundred years, the English Landed Gentry had all lived a very privileged lifestyle in their various country houses, up and down the length of the United Kingdom.  With the decrease in the flow of money, everything was now in a state of change.  People living in ancestral homes no longer had the resources to keep them going.  Keeping on a large team of servants was becoming impossible and the mounting costs of roof repairs and other essential maintenance, meant that one by one, these once privileged families, were having to consider selling up and moving on.

For most of these families, World War II (1939-1945) was to be the final nail in the coffin.  Britain was now broke.  Very few people could afford to live in a large country house.  For most, the final clear out happened in the late 1940s and early 1950s.  Country estates were being sold off left right and centre.  In each case, the estate would be split into smaller farms, and then sold as separate lots.  The contents of the big houses (antique furniture, paintings, books etc) were all emptied out and went under the auctioneer’s hammer.  For a number of years there were auctions almost every weekend and with such a large amount of stuff coming onto the market, lots of amazing relics were sold for next to nothing.  The prices for old furniture were often so low, that sometimes it was more economic to just chop it up for firewood.  If you had been wanting to collect antiques at the time, you would have picked up some excellent bargains.