My father never actually lived at Linley Wood but he went there often and knew it very well.  His grandfather Frederick died in 1945 and 4 years later, the estate was split up and sold.  James’ father Cuthbert wrote to one of his cousins at the time and said that the London auctioneer’s Sotheby’s had collected all the portraits of queens and duchesses and from the library they had taken a few boxes of mouldy old books.  The rest of the contents was to be sold by the local auctioneers at the weekend.

Cuthbert did note that he had taken home a few trailer loads of portraits and other stuff that he felt had a particular family significance.  In fact, given the difficult circumstances of the time, he did do quite a reasonable job of separating out a lot of the more important relics.  He drove back down to Cattistock, in Dorset, where he was now living in a 200 year old thatched cottage (The Pound House).  In the same village he had also bought a house for his mother (Cattistock Lodge) and between the two properties he was able to stash quite a lot of the old family stuff.  Much of these old relics were still there when I cleared my late aunt’s house in 2005 (no auctioneers this time).

So, James started his life with a reasonably privileged upbringing, but things were changing very quickly.  They were Landed Gentry type people but the family land and the general trappings of family wealth that he had witnessed as a child were fast disappearing.

In 1930 James’ family were living in Fareham near Portsmouth, where his father was based in the Royal Navy.  At that time, Cuthbert and Violet had three children, all daughters (Pat, Danny and Rosamond) so when James arrived, they must have been very pleased to at last have a son who would be able to carry on the family name.  By this time Violet was very much advanced in her years to be a mother.  On 15 February, heavily pregnant, she was to celebrate her 45th birthday.  She gave birth to James the following month, 28 March.  He did not have any physical defects and gave every appearance of being a perfectly normal baby. 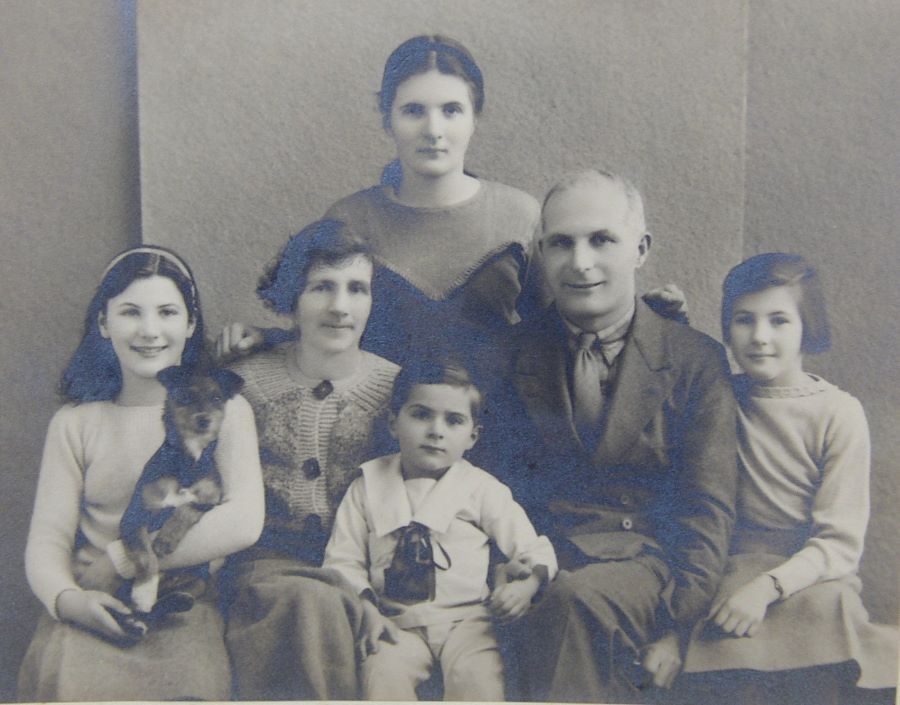 As I look back and consider the very privileged childhood that James had, one impression I get, is of an only son being brought up with everybody doing everything for him.  His mother doted on him as probably did all the household servants.  In addition, he had three elder sisters continually keeping an eye on him. For James, life was probably all play but no responsibility and nothing really practical.  For him there was very little opportunity to think for himself and develop what today would be called personal organisation skills.

A few years later James’ father Cuthbert took up a job in Hong Kong and so James spent his early childhood growing up in the far East with a Chinese nursery maid (amah) to look after him.  The family returned to England in the mid-1930s and when James was about 8 years old (1938), he was enrolled at a boarding school (Winton) in Winchester.

James said that he found school difficult, as he was quite small for his age, but he was fairly bright and so he managed to pass most of his tests.  He then progressed on to The Royal Naval College, Eaton Hall, near Chester.  His father had made the decision that James would follow in his footsteps and become an officer in the Navy.  James was not consulted and that was really a pity, as with hindsight a career in the Navy was probably not the best choice for him, or as James would later put it “not really his kettle of fish”.  However, back in those days, fathers, sent their sons to boarding schools and fathers, decided what vocation their sons would follow.  That was just the way things were. 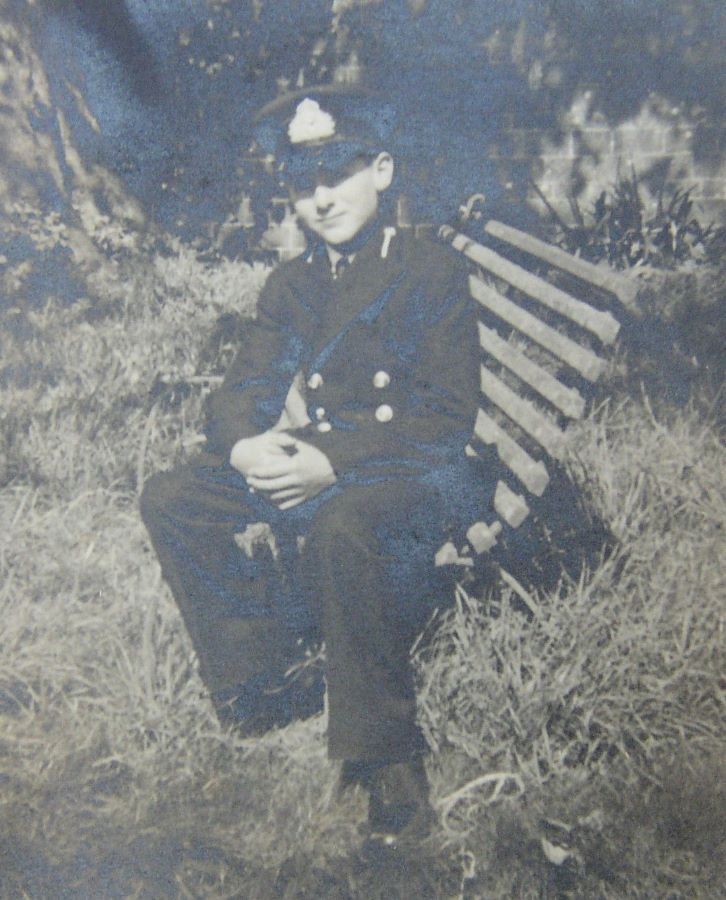 A few years after WWII had ended, James passed his officer selection board and entered the Britannia Royal Naval College, Dartmouth, Devon.

Looking back, James said he actually found it quite difficult to follow in his father’s footsteps.  Cuthbert was a war hero and he had been awarded the Distinguished Service Cross (DSC) for bravery in the Mesopotamian campaign during WWI.  Following in his footsteps would have been difficult for anyone.

James did however enjoy his time at Dartmouth (1946-1947) and he told a very funny story about being in a boat race during his time there.  The fast team was very organised and got their sail up very quickly and launched.  The team that James was in, was all the duffers.  They were rather disorganised and as a result were a good 10 minutes behind, before they finally managed to get their boat underway.  However, by a stroke of luck, it just happened that there was a very fast tide that was just on the turn.  As the events unfolded, the fast team, which had launched first, had immediately been swept backwards but by the time James’ team launched the tide had turned and they were swept forward and actually won the race!

Despite James enjoying himself, his navy records indicate that all was not well.  He was assessed on four occasions and on three of these the officer in charge noted that James was very popular with everyone but he was struggling.  In three of these reports the details were words to the effect that James is young and small in stature but will hopefully develop well, given a bit more time.  However, the fourth report was written by someone who, with hindsight, was a bit more on the ball.  This report is very short and just says “James is incompetent and should be removed from the navy as soon as possible”.

James graduated from Dartmouth and then spent a few years stationed on aircraft carriers which he found to be quite exciting.  After that he was being considered for pilot training.  Flying is an ideal job for officers who are small, as the space inside an aircraft cockpit is very restricted and not suitable for big men.  James was sent to Yeovilton and was flown in a Firefly as a familiarisation training exercise.  It was around this time that everything just became too much for him.  He had also had a short interlude with a lady called Hope but things with Hope had not worked out as well as he had hoped.  Presumably this had also added to his anxieties.

He went home for the weekend to see his parents, and while there, he had a complete mental breakdown and became convinced that he was the devil incarnate.  His father, who was very religious (as most people were at the time), tried to perform an exorcism to remove the devil from him but this probably made things worse, as James was then made to feel that he really did have the devil in him.

Exactly what happened in James’ brain, we will never know, but his father called the navy and they arranged an ambulance to pick James up.  He was drugged and was taken to the Royal Naval Hospital at Netley near Southampton.  This was around 1953 when James was about 23 years old.  The diagnosis was schizophrenia.

The word schizophrenia is a medical term, used to describe a wide range of mental conditions.  It is often regarded as split personality but every case is different. The patient suffers from hallucinations, delusions, confused thoughts and changes in behaviour.  The only common theme is that their brains don’t work logically and, in most cases, they are not curable.  The main treatment these days is drugs to slow their brains down but the patient then feels very lethargic and so does not like taking the drugs.

James said he felt quite relaxed in the hospital, as with the drugs he felt very restful and he had no responsibilities.  The nurses fed him and told him what to do.  He did not need to think about anything.  Sadly his naval career was now over.  He said that the most difficult thing about this, was that his social life disappeared over night.  All his friends continued in the navy but he was now on the outside.

After a few months he went back home and lived for a while with his parents in Cattistock, while he started to get his thoughts together and think about what to do next.

As it was to turn out, James and his sisters Pat, Danny and Rosamond, were all to suffer from schizophrenia, at different times.  Pat and Danny got it relatively mildly but Rosamond got it quite badly and for James it was to prove utterly devastating.  It must have also been terrible for their parents Cuthbert and Violet, but they were very religious, and I suppose they just prayed regularly and hoped that it would somehow sort itself out and disappear.  I would note here that I do not mean to criticize them, as in those days, not much was known about schizophrenia and even today, any plan to address a situation like this, would not be guaranteed to result in a good outcome.

After being at home for a period, James decided that farming might be a more suitable career for him.  It would be a lot less stressful than a job in the navy and hopefully everything would work out much better.  He decided to enrol at Kingston Maurward College, near Dorchester.