James and Dora met at Kingston Maurward College in September 1955 when they both enrolled to do a one year agriculture diploma.  James was 25 and Dora was 20.  There were about 30 other men on the course and 6 girls.  Most of these fellow students were younger, having progressed on directly from school.

Kingston Maurward was originally an estate owned by the Pitt family (cousins of William Pitt the elder who was Prime Minister from 1766 to 1768).  The estate was eventually taken over by Dorset County Council and in 1949 it opened as an agricultural college.  The original manor house, a rather impressive building clad in Portland stone, was very much central to the activities of the college, and for James and Dora, and the other students, the whole place must have been quite magical.

James got on well with everybody, just like he had in the navy.  He developed a very good friendship with another student called Freddy Prideau and they all had an excellent time together.  For the 6 girls it must have been great with all these men around, but James and Dora were in fact the only ones who ended up getting married.

Dora visited the Pound House in Cattistock and met James’s parents, Cuthbert and Violet, and also his grandmother (Constance or GM) who was by now 87 years old and was living at nearby Cattistock Lodge.

James did not try to hide from Dora, the fact that he had been medically discharged from the navy with a mental illness.  He put it down to a bit of a ‘break down’ and this is probably what he genuinely believed.  Other than that, he did not talk about it.  He certainly did not use the word schizophrenia, as it did not seem to be anything to dwell on.  His parents likewise were also silent on the matter and perhaps that was their way of hoping that the problem would not occur again.

Dora and James had decided that they both wanted to get away and start a new life. New Zealand was the country that held the most promise for them.  At this time, the New Zealand government was encouraging emigrants from the United Kingdom and if you met the criteria, you could get a subsidized passage for just £10 but James decided that they would fund their own ticket.  This may have been because he realised that, with a mental history, he probably would not be eligible for a subsidized ticket anyway.

James was very impressed with Dora’s stepfather Les Bailey and in particular his ability to make things and fix things using tools.  At the same time Les and Dora senior really liked James, as he was such a lovely person.  Les encouraged James to go on a welding course before they set off and so James did this and very much enjoyed it.

Dora found James’s parents to always be polite and friendly but looking back she felt that they probably looked down on her.  In fact she was spot on, as years later they made their views quite plain, to some of their other relatives, that James had married beneath himself and that Dora’s family were nothing more than just common working-class people.

The wedding took place at St James’ Church in Poole, 26 August 1956, and the whole event went well with no problems, except for Dora having trouble getting to the church on time.  Just as she and her stepfather Les were driving to the church, the Poole harbour bridge had gone up and so she was delayed 20 minutes. 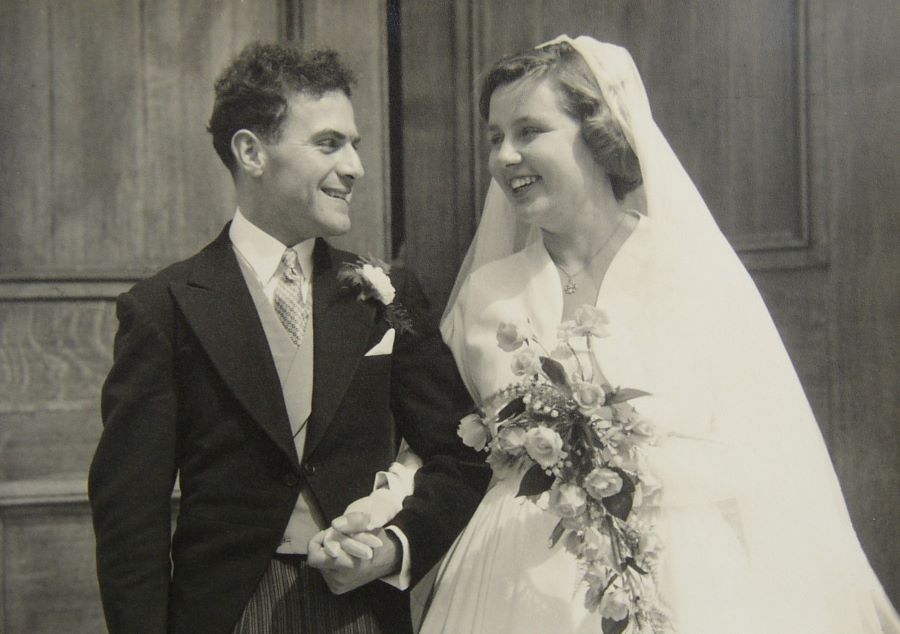 A few weeks later, in early September, Dora and James boarded the passenger ship RMS Rangitata and they set off for New Zealand sailing via Panama.  The ship made a few stops along the way but James was not keen to disembark and see the tourist sights.  He felt they would be better to stay on board and save every penny of what money they had.  Dora thought this was a bit strange but did not really think about it much further.  If James did not want to take this one-off opportunity to do any sightseeing, then that was fine by her.

They arrived in a very cold Wellington, 4th October, and disembarked.  By now Dora was suffering from morning sickness, which rather dulled her appreciation for the great adventure that they were now on.  They managed to get some initial lodgings with a Mrs Smith in a house up on the hill overlooking the harbour.  The next step was to find a suitable job on a farm and begin their agricultural career.  New Zealand was very much on the move and it did not take long to find a few farming jobs, advertised in the Wellington newspaper.

The first job they tried for, was working on a farm at Konini near Pahiatua, so they journeyed out by train (railcar), to take a look and meet their potential employer.  They didn’t get a comfortable feel about this job and when the young couple, who were just leaving, took them aside and told them the place was terrible and the employer was diabolical, Dora and James decided to pass on this one.  On their journey back, Dora remembers waiting on the railway station platform but when the railcar appeared it drove through without stopping.  This could have been a bit of a disaster, as there were no more trains and nowhere to stay.  Luckily the train driver had seen them and so he stopped the railcar and reversed back to pick them up, much to their relief.

The next job they applied for was a dairy farm at Pihama, which was located on the coast between Opunake and Hawera.  This was in Taranaki, the whole province of which is dominated by the beautifully formed volcanic cone of Mt Taranaki (Mt Egmont) rising up 8,261ft (2,518m) from the sea.

This job felt right, so they accepted it and together they moved into their first home just before Christmas 1956.